It's been quite a hectic week at work, but I've still managed to squeeze in a good few hours of painting time getting my tank line rolling and almost out of the factory doors.

All detail is now painted up, tons of decals have been applied and weathering done. I tried some new mud effects from Ammo of Mig on these guys. Still not sure if I prefer these over the Marutechnics ones I've used previously or not. As they are enamel based the drying time can take hours and I'm waiting to see if they change shade or consistency at all. I've liked ones with more granularity before and these seemed to be more of a thick wash consistency. I have a feeling they might benefit from the addition of fine sand or plaster to build up thicker mud layers. 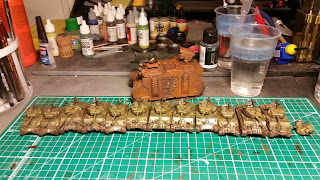 Unfortunately I won't be getting them finished with a varnish layer soon as the mud effects have now been drying for a good few hours and are still wet to the touch. I have an early start tomorrow morning to report for a week of retraining in the military so no hobby time until I return from there. The weather is looking suitable for field exercises with rainfall and +2 degrees being promised by the weatherman. Would be fun to be able to go during summertime for once, but  somehow I always seem to get ordered back during November...
Lähettänyt Samuli klo 19.18 10 kommenttia:

Oh boy it's been almost six weeks from the last update. My utter lack of painting mojo has continued with little being done lately. Haven't even had a good game in during the period as work has intervened in my regular gaming days. I had a short streak of painting inspiration in September, which was cut short by a massive varnish problem ruining a half a squad of Chaos Marines.

Still in the last couple of weeks I've been getting back to painting again. It's been quite slow as I've only had time to paint during the weekdays as all my weekends have been spent either in the forest or out to the sea hunting. To have something nice and fast to paint to get my appetite going I dug through my stash looking for something simple and found a small battery of Nebelwerfers that I'd based and put together at some point in the past. Oddly enough my Flames of War Germans have always lacked this iconic weapon that seems to feature in every Late War German list ever made in Flames of War. 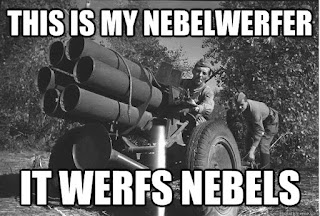 Jokes aside, quick paintjobs with my regular 15mm way of painting of basecoat and one highlight layer followed up by a brown wash. It was actually really nice to paint something that only took two evenings from start to finish. Finally some sense of accomplishment. I have a tendency to try to paint too many figures at the same time for effiencys sake, but it really does sap motivation at times with units taking too long to finish. 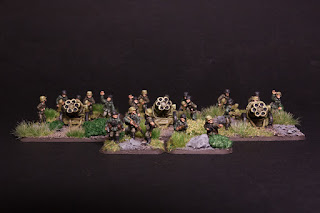 Basing took a bit longer as they've now been sitting painted for a nearly a couple of weeks and I only got around to finishing them today. Some of the clump foliage is still wet after being doused with thinned out PVA to make them stronger. But being impatient I went ahead and took pictures anyways :) 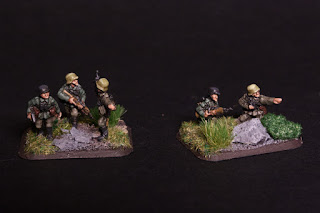 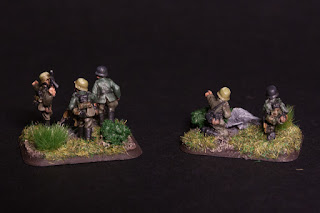 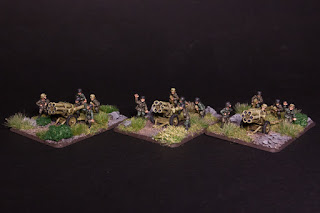 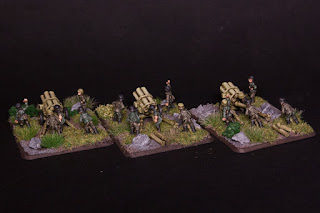 Immediately after taking the pictures I managed to throw one of them onto the ground braking it in a few pieces... Luckily the paint mostly broke off at the seams in areas where it's hard to see so fixing it wasn't too hard. Still I've gotta admit I was a bit pissed... 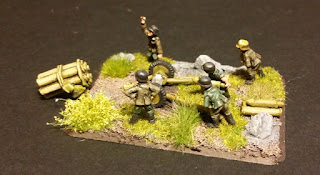 After these guys I've been slowly working on a few projects at the same time. I've always played my Americans either infantry or mechanised with Tank Destroyer support so I figured it was high time to add some Shermans so I could field an armored force as well. A simple colour modulation with the airbrush was done and now I've been picking out details. Decals and weathering coming soon. 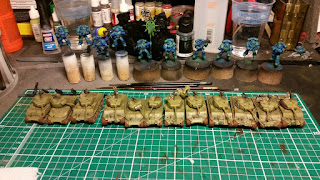 I'm also working on a Chaos Space Marine squad. And it's actually the second time that I'm painting half of them... I'd painted their armor and picked out all details and needed to apply varnish before decals and some weathering and figured I'd do it quickly with a spray can instead of digging out the airbrush. I'd never used the Army Painter Satin Varnish before, which should already have told me to test it on something first before applying it on all the models. With it being autumn it was quite moist outside and in combination with that the varnish had some freak reaction and it turned milky white on top of the minis. I went through tips found online from applying a thin layer of varnish after the first one had tried to gently removing it with paint removal. Nothing worked and in the end I had to go and strip the paint of the first five that were very near being finished.  That really killed all my painting motivation for a few weeks and I've only lately been getting back. After the first disastrous run I decided to paint the whole squad at the same time for efficiencys sake. Airbrushing is now done (again) and I've started doing lining. Picking out details is next followed by paint chips and decals. Hopefully getting them done in the next few weeks.


Anyway that's the end of my rambling for now. Hopefully the next update won't take as long! I'm anxiously waiting for my dropfleet commander pledge to arrive and the blog will probably be filled with that once it get's here!
Lähettänyt Samuli klo 22.39 12 kommenttia: