With the Painting Challenge over it's high time I get to posting my final entries! Points wise my challenge wasn't much of a success with only 506 points gathered out of my original goal of 1000. Personal worst of the 5 editions I've taken part in, but still I'm pretty happy with the result. When setting up my target I didn't know I'd be buying an apartment just a few weeks later and spending much of the beginning of the year redoing it before moving in. Even after that I've honestly felt quite exhausted constantly and rather spent my time watching various TV shows and spent my hobby time mostly gaming instead of painting.

Enough rambling and onto the things that I actually managed to paint up!

First up the cast of Danger 5 and their arch nemesis Hitler with some of his cronies. I'd planned submitting them for the final bonus round as they were perfect for the theme, but seriously underestimated how long it would take to paint them up and missed the deadline. Still when I accepted the inevitable it did allow me to paint up the accompanying human and lizard soldiers for Hitler that would otherwise have been left for another entry. Great sculpts from an even better TV show. Now I just have to figure out how to actually use them in some game :) 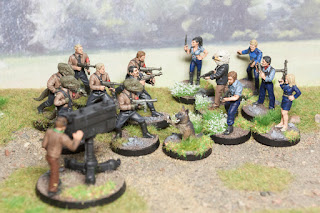 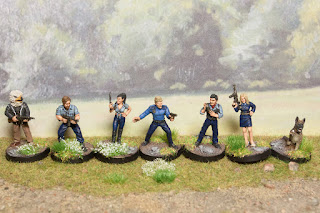 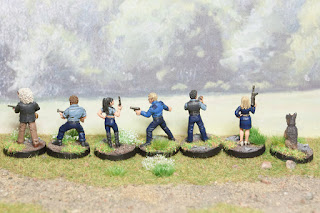 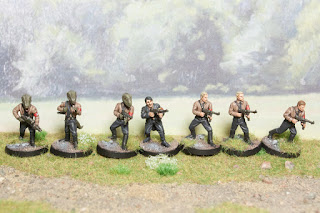 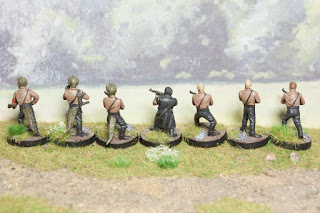 For my final entry it was time for my entry fee. The wednesday crew had decided to paint up some Spanish Civil War minis for Curt's collection and I decided to join them. SCW has always interested me, but never enough to get me started on collecting any forces. So this was the perfect opportunity to get some painted without having to commit to a project. Luckily my fellow Finn Teemu (Vain Vader) was organizing the group entry and had ordered plenty of extras so I was able to source a mini from him. I went with a Miliciana as what sane man could resist a fiery southern woman! Like all Empress offerings the pose and general sculpt was great, but the face was bit of a let down. All the minis I've painted from them have had fairly smooth faces with little detail, perhaps more realistic in the scale, but it just doesn't look as good as a some exaggerated details. 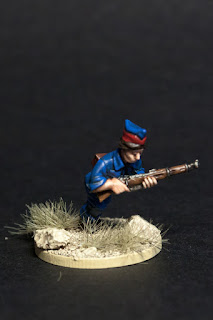 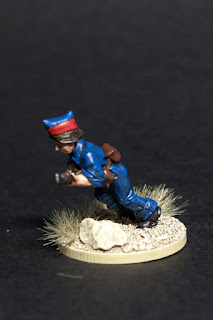 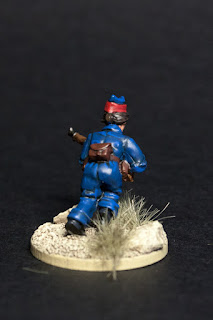 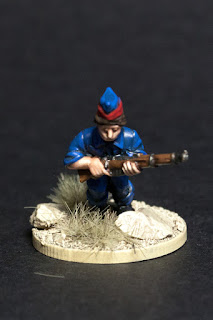 With the challenge ending I was left with a few projects on the table in varying states of readiness. Different fantasy miniatures had paint thrown onto them as well as two battalions of Napoleonic Saxons that got about all the base colours done and were only missing a final highlight and a wash. I just couldn't get myself to finish them as doing large groups of nearly identical minis just started to feel too much like work and I had to force myself to pick up the brushes. So I felt better leave them on the desk and continue when I start to feel like painting again. 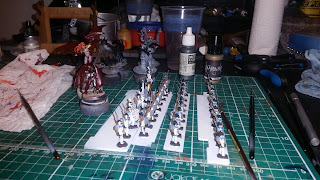 Finally part of the reason why I've been fairly quiet on the blogging and painting front aside from the renovations. A product development project on which I've been working on as one of the lead designers for the last couple of years has more or less reached it's conclusion with the first production runs and project delivery to our customer. As we are using a subcontractor outside of Finland there's been quite a bit of travel to inspect and approve work. Still quite nice to see things in real life after looking at them on the computer screen for such a long time! Hard to realize the scale of things as well considering that the smallest sizes weigh about 17tons and take roughly 100 cubic meters of space. As you can see I'm also pretty adept at playing the part of the inept office worker. No helmet and taking a selfie while hanging at 4 meter height with no proper walkways is something that is exactly what they tell you not to do at the occupational safety courses that I've gone through :) I probably should write a hazard report due to that... 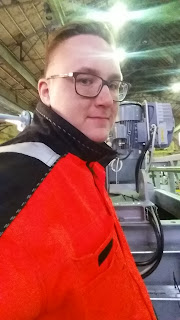