Some more additions to my US Flames of War forces. This time a Cavalry Recon platoon consisting of a M8 Greyhound with some supporting Jeeps. They pack a surprisingly large punch that's highly mobile especially on roads and I've really been starting to think about painting up a Cavalry Recon Troop at some point to field more of these bad boys. Maybe after I've finished up the Mid War project.

No surprises in the paint job with a basic greenish brown base colour and some modulation with a yellowish tone followed by rather heavy weathering all along. I used some decals from Dom's decals again as I didn't have suitably sized ones available from other manufacturers. Knowing how fragile they were I was a lot more careful this time and the result was quite OK. At least no tearing up when removing washes etc.

Next up a battery of M7 Priests and some cheesy Warrior teams and then I think I'll have to paint up some 28mm for a change. To my horror I realized I hadn't painted anything else than 15mm since March. It's a bit strange especially when I'm not very fond of painting in smaller scales at all. So a therapy project of 28mm is definitely up sometime soon! 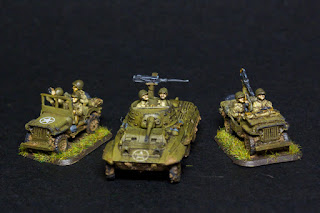 Some more US troops for Flames of War. I actually finished these guys in late September already, but as they were done just the night prior to a game day they were quickly packed up without any photos being taken until now.

This is the older metal and resin version of the Armored Rifle Platoon as I wasn't too keen on the new plastic ones especially since the sprue design was a bit lazy with multiple poses being duplicates in the same sprue. The older models aren't without their issues either as the moulds are pretty old and it shows in casting quality quite a bit. Multiple infantry models needed a lot of work as did the resin half-tracks. There were a lot of issues with extra resin around the track area etc. which needed to be carved out so tracks could be attached.

As there is quite a lot to paint for a single platoon I went with a straight forward paint job of just a few highlights and a wash on the infantry and the half-tracks being painted with a slight colour modulation before decals and weathering was applied. I used Dom's decals this time as I'd heard a lot of praise about them and the Battlefront ones were out of stock at my local store. I don't know if I had a bad batch or something, but they were extremely delicate. Even after two layers of gloss varnish on top a few of them almost disappeared when I wiped away excess enamel wash during weathering. The decals on the sides are battlefront ones and they held up without issue while the ones on the bonnets are from Dom's. I batched up mistakes with some mud splashed on top so no big deal, but still a slight nuisance.

There's actually one extra half-track that belongs to the company commander. As I already had some extra command bases painted up I didn't bother doing any new ones yet so the CO only got a new ride this time.

It's been a while since I posted anything related to our Russia 1812 campaign as I've missed a few games due to other commitments. However last weekend I was able to take part in the Battle of Loubino or Valutino Gora.

The real battle took place on the 18th of August after the battle of Smolensk when the retreating Russian troops needing to pass the crucial junction at Loubino fought a successful rearguard action against French forces commanded by Ney. Barclay de Tolly defended the river Stragan against a frontal attack by Ney. He was able to hold the assault long enough for most of the Russian forces to pass before withdrawing when dusk arrived. The French had an opportunity to trap the Russians as Marshal Junot had crossed the Dnieper with his forces and was in perfect opportunity to flank the Russian forces. However he refused to do this without explicit orders from Napoleon even when the sound of gunfire could be heard from a few kilometers away and requests for assistance were made personally by Murat.

Another account of the battle can be found on the blog of one of my clubmates Jaakko. Black Powder: Battle of Loubino (Valutina Gora)

Our scenario started with relatively small forces on the table immediately with one Russian division as a rearguard faced by 3 French divisions attempting to cross a river and drive them off before they could be reinforced. Some of Ney's divisions would arrive later as would Junot's Corps that would require a 5+ roll at the start of every turn to be able to activate.

The initial French advance on the left and center were fast with the stream being quickly forded and battalions pushing in to Russian positions and close combat. The French right flank was slightly lagging with the cavalry commander having difficulty understanding the rushed orders from Ney and Junot refusing to act. 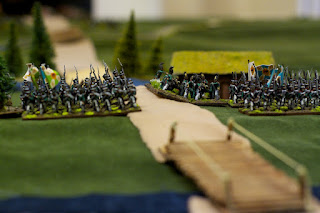 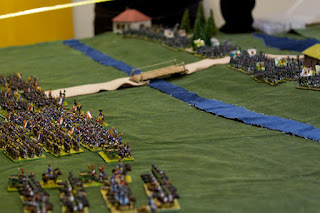 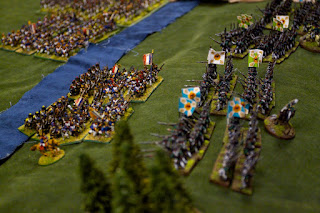 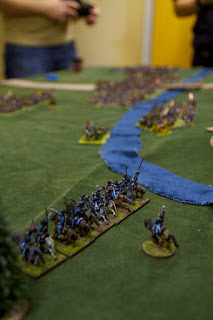 The initial French assaults were very effective with the assault in the center and right flanks on the ridgeline devastating the Russians and pushing them back quickly. However on the French left a brigade of Russian Jägers however was holding on strong even while the French army bypassed them on the other flank.

On the extreme right flank a brigade of infantry had to be diverted to secure the flank against looming cossack and hussar threat as the French cavalry was still confused with their orders. 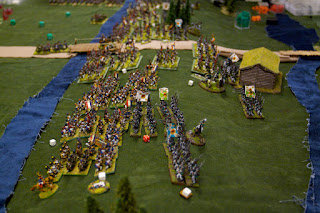 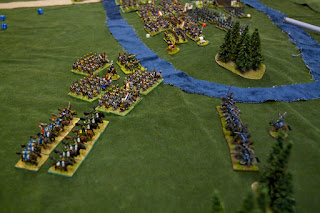 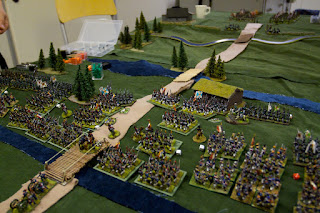 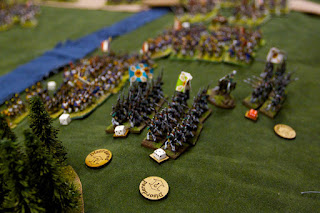 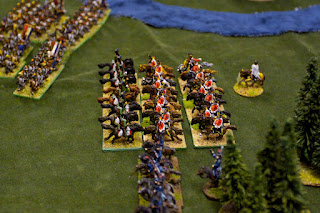 Just as the French are ready to push through to the second crossing point Russian reinforcements can be seen arriving from the direction of Loubino over the River Jarovina. They quickly form into a battle line waiting to repel the attacking French.

The lone surviving Jäger brigade from the first rearguard division continues to hamper French advances and even launches attacks against the rear of those French troops that have already bypassed them along the road. 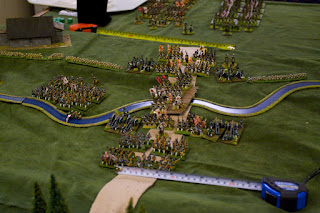 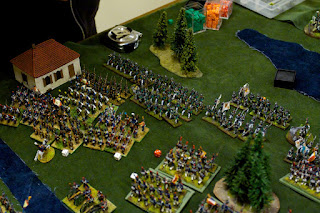 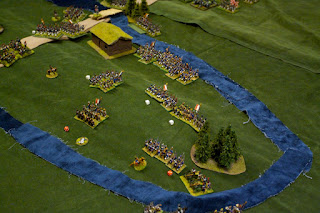 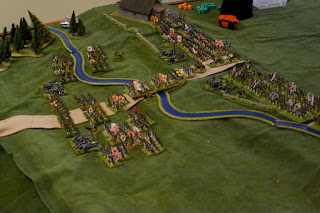 With the first French troops crossing over to attack the Russians a fierce firefight breaks out between the opposing forces with artillery firing canister shot at near point blank range and both sides suffering heavy casualties. With darkness fast approaching the French renew their attack and try to push the Russians away with their bayonets. Casualties start to mount up with multiple battalions breaking on both sides as the close combat moves back and forth along the road.

The French cavalry on the right flank had finally shaken away their confusion and made good pace moving in to threaten the Russian right flank alongside Razout's infantry. However the timely arrival of a fresh Russian division of 8 battalions on the flank stopped the French advance. 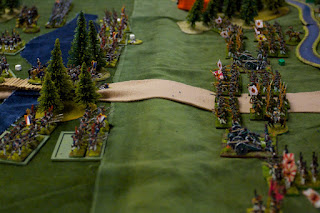 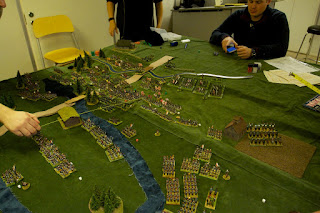 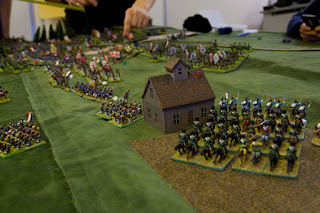 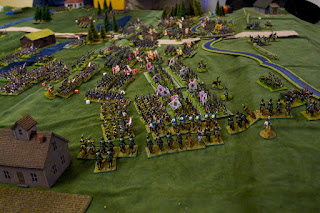 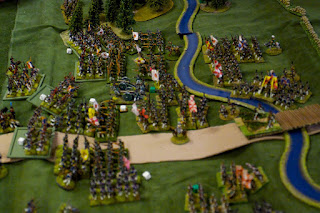 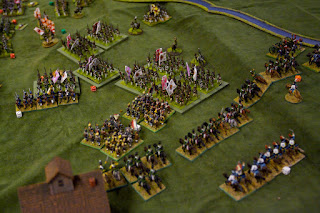 With darkness coming down over the battlefield the fighting starts to quiet down as visibility drops. The Russians have successfully defended the road towards Loubino and denied the French any possibility of cutting off their retreat. However this came at a heavy cost with the Russians losses being high compared to any French losses. Junot's inability to act really hampered the French, but he did end up threatening the Russians in the end with his Corps moving up to striking distance. However it was too little too late and the de Tolly would be able to retreat towards Moscow ready to make a stand at Borodino.

Another great game with quite a lot of troops on the table (roughly 130 battalions). The next one will be fought in a few months time to allow for more troops to be painted as Borodino will really require massive forces. After that it's towards the retreat with at least Berezina to be played as a scenario.
Lähettänyt Samuli klo 10.23 6 kommenttia:

I've been a bit lazy taking pics of what I've painted recently, but in the meantime it's time to celebrate Tanktober! The one time where promoting tracked metal beasts is not only acceptable, but highly recommended!

More painted tanks will come this month, but I'll start with pics of real tanks. Though in this case it will actually be an Infantry Fighting Vehicle, but since it weighs more than most WW2 tanks did and packs more punch I think it can pass.

Behold the BAE Systems Häglunds CV-90. Used by Finland amongst many other countries, it was the vehicle that my battalion was using during my military service. Mostly used by armored infantry it was also in use by mechanized reconnaissance where I was serving. I guess you could say we liked to cover our vehicles with a bit more camouflage material than normal :) 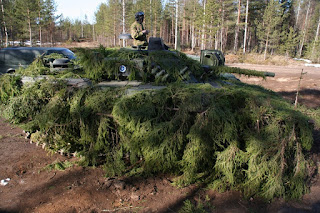 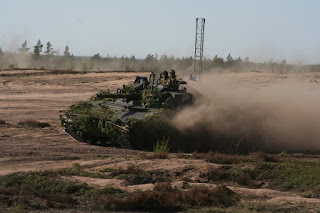