After painting a bunch of rats I got back on track with a project that I started during the sixth edition of the Painting Challenge, the whole Saxon Corps for the 1813 campaign in Germany. I'd originally planned to have the whole Corps painted up by the autumn of 2016 when we were going to start our campaign, but life has a curious way of disturbing even the best plans. One gaming companion got deployed overseas while another moved to the states for a little over a year so our Napoleonic gaming got put on hold for a while. That coupled with my general lack of painting mojo lead to the whole project being tucked away in a storage box for a while. With the 205 year anniversary of the campaign coming up and the whole crew back in the same country we are finally moving on with the campaign so it was high time I dug up my Napoleonics project box and got painting. 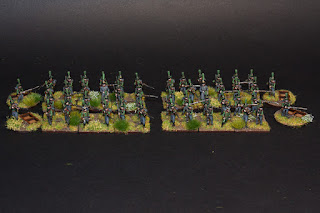 Until now I've done a bit over half the Line infantry as well as heavy cavalry and artillery. To be honest painting all that white on the infantry is bit of a drag so I figured the next in line should be something at least a bit different. Luckily the Saxon's outfitted their light infantry with green uniform and equipment that had black leather straps! I can say that this was pure joy compared to the white uniforms with white strapping that all the line infantry and grenadiers had for the Saxons. Considering that I really don't like painting white, I still don't really understand how I ended up deciding to paint a whole Corps of them.

AB minis as are all of my other Saxons (nobody else seems to make them at this scale). Great sculpts, but they are hindered a bit by the fact that there are only 3 different poses for them. Luckily it's not too bad as they were mostly used in a skirmishing role so I just based them two minis to a base instead of my normal three. Spread out a bit on the table it shouldn't look too bad. I also had 4 minis left over as I hadn't taken into account officers in the units, but as we are using small dice as tokens to indicate different fatigue levels and other effects in game they offered a great way to spice up my dice trays for the units.

The two great coat wearing officers have a small conversion on their shako. They normally had small pompoms, but I thought they would look a bit funny with everyone else having a tall plume so I quickly rolled some suitable plume shaped rolls from green stuff. They ended up a bit too tall, but from a distance look quite nice. 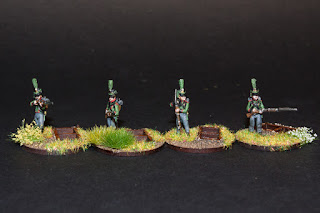 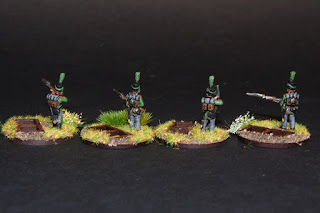 Painting wise I cheated a bit compared to how I normally paint my 15mm Napoleonics. For all the brighter colours I've tended to paint all the colours, add a dark brown or black wash and then highlight the minis, but with these guys I just skipped the whole highlight step and left them at it. The only addition I did was the red piping on their uniforms to make them stand out a bit.

For 2018 I have a few main projects and themes, with plenty of Skaven, 40k and Napoleonics in the pipeline. I decided to start off with a soft start to my Age of Sigmar Skaven by painting up my Willy Miniatures Skaven Blood Bowl team that I had gotten late last summer from their Kickstarter. 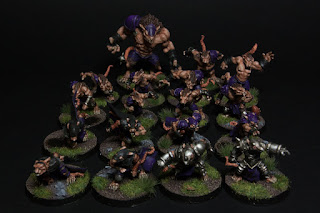 These guys represent the first half of my team with all the core players and a few special linemen to represent players who've already picked up some skills. I still have all the star players, plenty of different mutations and all the supporting staff to paint up, but they'll have to wait for sometime while I get other projects going forward as well. Considering that a team can have a maximum of 16 players it could be said that I might have gone a bit over the top as the final player and support staff count will come up closer to 30... 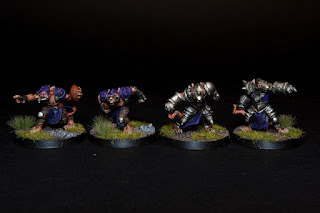 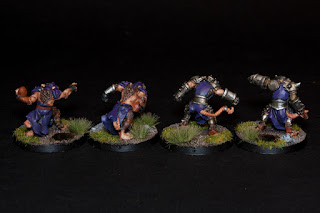 These Willy Miniatures sculpts are quite nice, but the casting quality did let the minis down a bit with massive flash and some slipped mould lines on them. And the sculpts are clearly done by at least two different sculptors with the style changing quite a bit between different minis. The difference is already quite clear between the normal linemen and the special ones like the kicker and fat rat, but with the star players and mutated players it's even more pronounced. 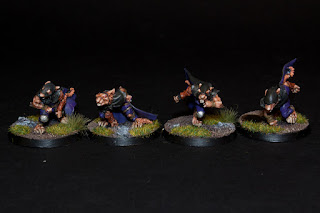 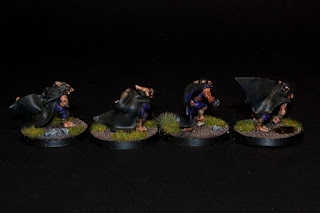 I actually had the miniatures themselves painted up in the first week of the year, but ended up trying to do some water effects on the bases in the form of puddles, which caused some issues and a bust schedule. I'd bought a bottle of AK Interactive Still Water that I decided to use on these guys. And to be honest the product was quite a disappointment. The end result was quite nice, but to get there required way too much effort to be really worthwhile if doing large batches of miniatures. It's supposed to be usable with layer thickness of up to 3mm, but even with 1-2mm thickness shrinkage was a major issue already on puddles as small as the ones I have on the bases. All the liquid would pull to the sides and I'd have a massive hole in the middle.

In the end I ended up doing 5 layers of the stuff on the worst bases and 3 on even shallowest one to get the whole thing even. And with long drying times this whole process took ages to go through and I only managed to get them completely finished on Friday evening. 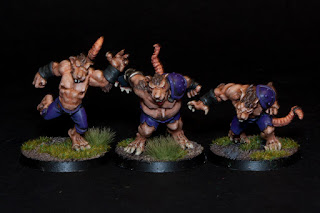 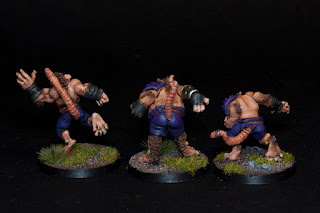 Another new product I used on them was Warcolours paints. I've had them for a while, but never really used them too much. There's bit of a learning curve to them as they don't exactly work like other acrylics, but rather have much longer drying times, are a bit gel like before thinning and are extremely translucent. But for doing smooth highlights and blending different paint layers they are just amazing! 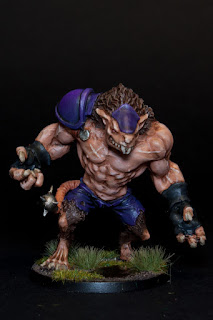 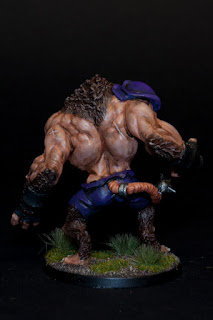 My photography doesn't really show things well enough, but even with my skills achieving really clean highlights and semi-borderless colour transitions was easy to achieve. The paints definitely aren't that great for painting large armies, but I can definitely see use for them with heroes and some more special minis.

This post has been a long time coming, but I guess better late than never.

Even though I haven't been posting anything, I wasn't completely idle in the last few months of the year. I ended up finishing my Soviet project, painted a few battalions and batteries of Napoleonics as well as got started with a quick few minis in the Analogue Hobbies Painting Challenge. The end of the year also saw me switch jobs, which lead to a rather busy December and start of the new year trying to get on track with new responsibilities and new products in an industry I haven't worked before.

Numbers wise 2017 wasn't too impressive with the lowest numbers of miniatures painted and games played in years. My painting slump that started in the last half of 2016 continued through 2017 and I didn't really start to get my painting interests back until the autumn. As well as a distinct drop in the quantity of games played the variety also came down as my schedule didn't really fit our Wednesday gamedays which included more varied game systems and mostly could just fit the Flames of War gamedays in and those only partly out of responsibility as I'm one of the guys running them and opening the club for others. 2018 should hopefully bring a change to that with a new Napoleonics campaign finally starting as well as changed schedules at home allowing me to participate more in different game days at the club.

To finish off the post a quick gallery of the  stuff that I managed to finish up in the last couple of months as well as a group shot of the whole Soviet project. 11 more T-34s, a Katyusha battery, the two battalions of Prince Anton Regiment and two batteries for my 1813 Saxons as well as some wild animals that I started my Painting Challenge with. 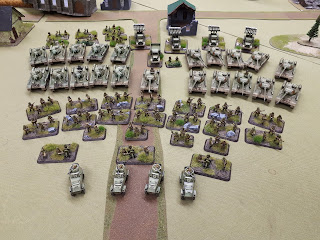 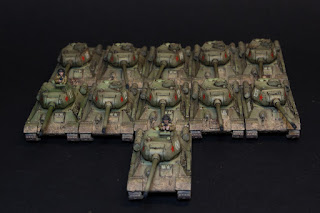 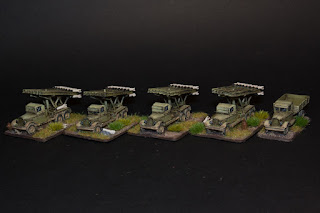 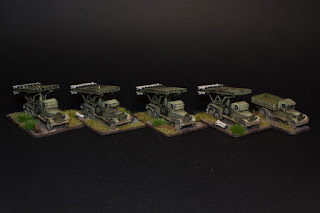 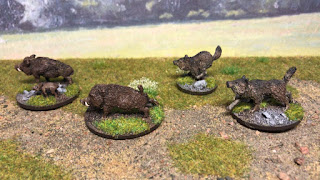 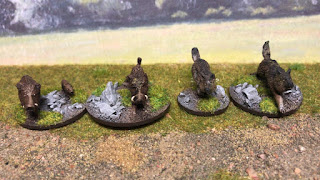 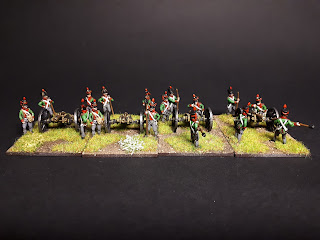 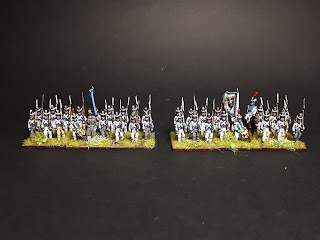 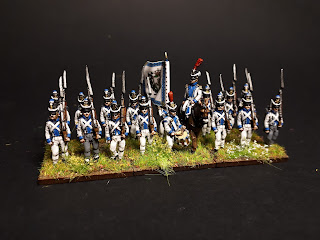 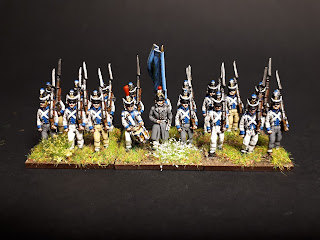