Last batch of PHR ships for Dropfleet Commander, at least for a while. I've still got one starter fleet left, but I'm leaving that for until I've gotten more games in and a better feel for how I want my fleet to work. I've already got more than I'll ever use in a single game, so just need to figure out what kind of ships I want more.

Got these done a couple of weeks ago for a game at the club, but took my sweet time taking photos and putting them up here. Painted here is one of the two PHR battleships, Heracles, some corvettes and four support frigates in the form of two Calypsos and two Andromedas. 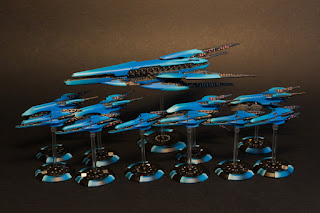 The battleships are some of the newer additions to the game and only came out a few months ago. I ordered mine straight away, but unfortunately it arrived with some parts missing which lead to a few more weeks of waiting until I got the items from Hawk. With them still being somewhat overwhelmed with Kickstarter issues it took some time to get replacements, but in the end I have the missing fins and a complete ship. The quality is a bit mixed with the body showing the layers from 3D printing that was used to make the master. Still nothing too bad and a light sanding followed by a heavier basecoat on the affected areas fixed everything.

The resin Corvettes on the other hand were excellent with a super smooth finish and no apparent flash or parting lines. Hopefully when the old moulds wear out on the battleships they'll redo them with a better finish on the master model. 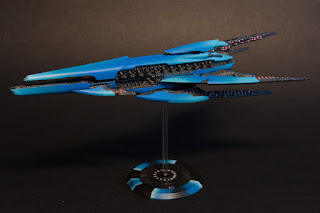 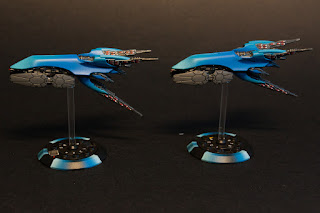 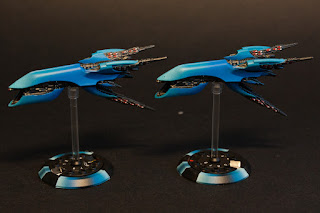 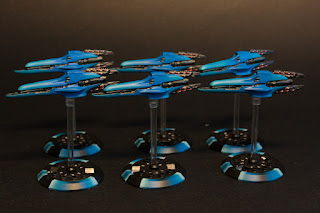 Finally I dug out all my current PHR ships. There's surprisingly many now that they are out of the storage box. Can't even fit them on my regular photo backdrop :) Next up for Dropfleet is an UCM fleet, I've put most together and I'm only really waiting for a few online only limited edition light cruisers to arrive and I'm all set for a large fleet. When I'm done with that I need to start running some demos at the club as there's only a few guys playing at the moment and new opponents certainly wouldn't hurt! 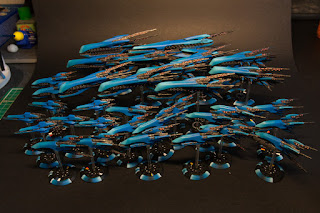