Looking for my painting mojo

As is probably apparent from the silence in my blog I haven't really been interested in doing any painting for a while. My rush to the finish line in the painting challenge was bit of a dud with plenty of things on the table, but I just couldn't get anything finished up. Those have now been pushed aside to wait for some inspiration to finish them at some point.

Lack of painting mojo isn't anything new though as frankly I haven't really felt super interested in painting anything since last summer or autumn. I have periods where it's fun to paint up things, but I just can't bring myself to crank out unit after unit of minis in similar garb. At times painting yet another Napoleonic unit or some more WW2 stuff seems too much like a job. This does tend to cause some issues as the games I like the most tend to require quite a lot of minis with an average Napoleonic division coming at around 200-300 15mm minis in our games for example.

Interestingly the thing I'm disliking the most at the moment is painting with a brush. Airbrushing is still ton's of fun, but somehow when I need to go in and pick out details to finalize stuff all motivation goes out the door.

Even though I can't get myself painting, it doesn't mean I've abandoned other aspects of the hobby. I've actually been playing quite a lot lately with version 4 of Flames of War being a ton of fun despite some of the oddities and rules that I disagree with. The old edition and lists were starting to be boring and this really brings a fresh way to play the game without making it too different from the previous editions. Dropfleet has also been fun to play as well as all the different board games that I've gone back to.

So with a plenty of gaming and other activities I'm slowly trying to find my painting mojo again. One thing that I'm not going to do is trying to force myself into painting any larger projects for a while as that's really killed my interest in brushwork. I'm only painting whatever seems cool at the moment and not stressing about even getting it finished. Last weekend was quite fun with some airbrush work on additions to my Dropfleet army as well as on a Chaos Rhino that I'd built up last summer and started on by airbrushing a base layer of different rust shades. I tested a some chipping products from Ammo of Mig that allow you to paint over a previous layer and by wetting it again you can scratch of some of the top layers. Worked out quite nicely and now the Rhino is waiting for some detail and decal work before I can get to washes. 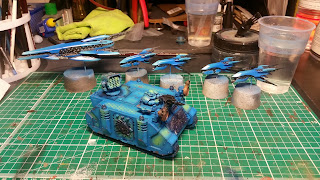 My mancave has also got a bit more furniture and it's starting to look more like what I want it to be. Another desk was bought for the PC so that I don't have to cram everything onto one desk. Some storage solutions for books etc. were also added which aren't really visible in the picture. Finally I bought some more paint racks from Warbases as well as new paint from a  newish brand called Warcolours. Haven't had time to test them out properly yet, but from the test pieces I did they really seem very promising! Not ideal for historicals, but strong vibrant colours and a nice 5 shade colour setup that should prove great for fantasy and scifi stuff. 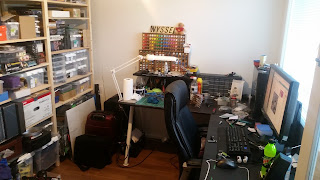 With that rant out of the way  I'm off to celebrate easter. My parents are visiting Finland for a week so some time will be sent with them as well as the in-laws. Nice to have a four day weekend after a few weeks of working 10-12 hour days.
Lähettänyt Samuli klo 20.07 4 kommenttia: