Next patch of finished Soviets is ready. To be honest they've been ready for quite a few weeks already as the tanks were finished in September and the mortar teams in early October. I've just been lazy in getting them up on the blog, even though I uploaded the photos as a draft two weeks ago already.

My hobby efforts have slightly slowed after the release of Total War Warhammer 2. I've always loved Skaven, but never really got around to building an army of them as the hundreds of minis needed didn't seem too inviting as a youngster. Now that I can command hordes of thousands of rats and their crazy machines you can imagine I've put in more hours than I'd care to admit. Adding to that joy are the Lizardmen, another faction that I never collected as miniatures, but always liked the aesthetics. Nothing appeals to my inner 7 year old more than lizards riding big ass dinosaurs while wielding massive weapons.

With these 6 T-34's and a full company of light 82mm mortars I'm over half way through my Soviet project. 10 more T-34's, 4 Katyushas and two AA trucks left and I should have enough troops to field up to around 1900 points worth of Soviets. Good basis to enlarge upon at some point in the future. But for now I'm going to stop at that and continue a bit on other projects as well.

Nothing new painting wise. AK Interactive paints are still acting up, but luckily I've now received replacements and all the units after these are painted with a combination of Ammo of Mig and Vallejo paints. I ran into an interesting issue with Battlefront decals though. On some of the turret numbers the first number would drift so that they were no longer aligned. I'd had the same in the first batch, but I thought that maybe the decal was unaligned to start with. With these I noticed it happening while they were soaking in the water. Strange effect that I hadn't seen before and that was annoying to try to fix with the decals being wet already. Cutting proved more or less impossible so I did what I could be scratching some away with a hobby knife and trying to move one number down a bit. Luckily with them being Soviets some numbers not being properly aligned doesn't matter.  You can always say the Ivan had just had a bit too much Vodka before applying turret numbers by hand :)

Next Soviet batch is almost done already with Katyushas just waiting for basing and 5 more T-34s missing weathering. I'll try to be a bit less lazy with posting them when they are finished. 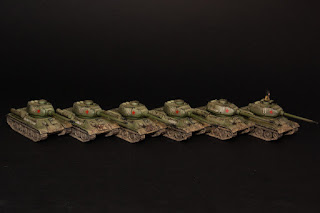 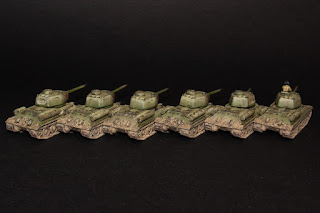 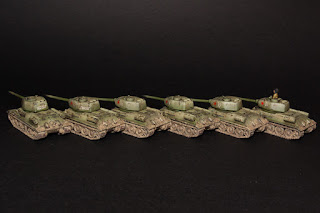 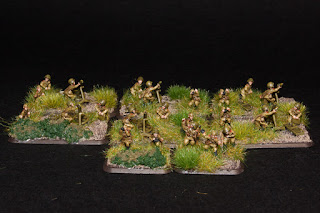