My theme for May was definitely Frostgrave. A campaign started at the club in the beginning of the month and I wanted to do a warband with completely new figures and not dig into older Mordheim stuff etc. that I have stashed away. The first painting efforts went into finishing my Wizard and his companions, before venturing into NPC monsters etc.

Coming up with a good theme for the posse was a bit tricky at first. I'm more a fan of Low Fantasy settings and wanted something semi historical looking. I was thinking about England or France around the 100 Year War period as a suitable setting, but in the end wanted to go for something much more colourful. Me being an engineer I figured the perfect wizard character would be more akin to an inventor or engineer and what better era for that than Renaissance era Italy. I'd expect the devices built by a renaissance genius would look like magic to the uneducated masses. And with the era also being the prime time for Landsknechts and Condottieri it would offer plenty of opportunities for colourful figures.

So I present to you the enchanter Ernesto di Armati and his technology hunting band of mercenaries. The miniatures really are quite a mix from different manufacturers from different eras. There's Games Workshop stuff from early 90s through to Games Day specials, Lead Adventure, Northstar a Crisis 2011 mini and even one I have no idea where it's from. It took some digging up to gather all the minis I wanted and I'm still missing a few that I originally wished to have, but all in all I'm pretty happy with the little warband. 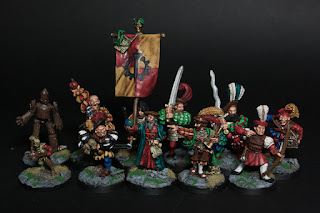 The group is lead by Ernesto di Armati a famed Milanese inventor especially known for his Constructs that have been used to great success by the Sforza family against Milans enemies. His young apprentice Marco Forlani has been serving faithfully eventhough he has developed an unhealthy interest in fashion and dresses far too flamboyantly to Ernesto's taste. Offering muscle and protection are a trio of Landsknechts who have also been tasked with carrying Ernesto's personal flag showing his gear and screw motif.

Ernesto himself is the 2011 Crisis miniature depicting Gerardus Mercator, known for his maps. As a tribute to the man I decided to also include the globe in Ernesto's hand. I got the mini through a very generous individual on the Lead Adventure forum. Kudos to him! Marco Forlani is Games Workshops Marco Colombo that I managed to buy through the Oldhammer trading page on Facebook. The Landsknechts are Empire Greatswords from both the older early 90s and the 00s. Those I managed to pick up from a fellow Finnish blogger, who's blog Dawn of the Lead is definitely worth a read, along with plenty of other older 15th century minis. 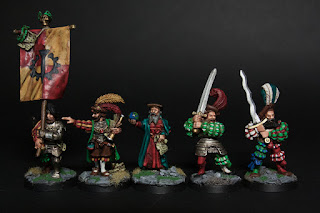 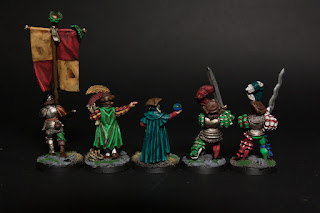 The Captain of my warband is the crossbow wielding Wilhelm Schwartz who is pictured alongside the two thieves, who'd rather be referred to as acquisition specialists. All are from Lead Adventure, with the captain represented by their Wilhelm Tell miniature and the two thieves are looting Landsknechts. All amazing sculpts that really were a joy to paint! 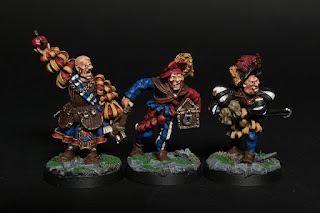 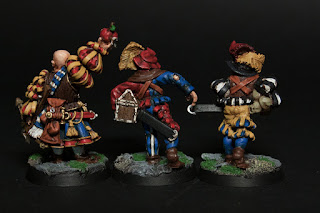 And finally the odd additions to the bunch with an archer, from some unknown manufacturer. He was bought with the older Empire models, but I'm not really sure which mini it is originally. The constructs are there for Ernesto to manufacture between games. They are from Northstars Frostgrave line. 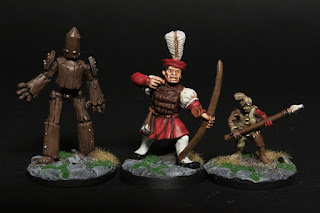 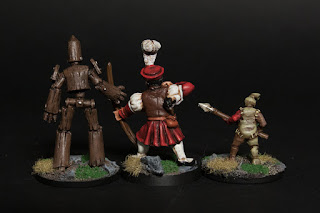 This group really was a nice project to bring back my painting appetite, but they did prove very time consuming to paint. I normally batch paint large similar groups, so 11 minis that are all more or less individuals did take quite a while to finish up and I only managed to get them done late in the evening prior to our first game day.

Still there's a lot more to come as I bought quite a few Oldhammer minis with the 4 painted here, and I've already gotten some of them nearly done alongside multiple monsters. Funny enough going into a new game that supposedly only needed a small amount of painted minis I actually ended up having about 50 on the painting line with animals, skeletons, zombies and the like ready to attack unwary explorers.
Lähettänyt Samuli klo 12.35