With Fairy Power Spray being pretty much useless nowadays and my last "proper" bottle running out, I was on the lookout for a suitable replacement. There are hundreds of threads on different forums on the subject with quite contradictory results so I wasn't too keen on trying something like brake fluid for example.

And then I bumped into this magical liquid called Xtracrylix Purisol Paint Remover. Not much could be found about it, but there was some praise so I figured I'd give it a try. I bought two bottles of Hannants for 3 pounds a piece. There's only 25ml of the stuff in a bottle so it is pretty darn expensive. With the cost in mind I was really expecting good results.

Important thing to note is that it is marked as being "Harmful to Health" so I'd suggest wearing protective gloves. There is also a very strong odor so ventilation is recommended as well. In the interest of science I naturally neglected both. It did cause some minor irritation on my skin so this definitely isn't something you want to leave anywhere near children or animals.

But to the most important part. Does it actually remove paint? I picked an old Chaos Space Marine model with a super thick paint job on it that actually concealed most of the details and the paint had been stuck on the model for years. In the instructions the recommended procedure is to brush the liquid on after which the paint should peel right off. On my test model I had negligible effect with paint coming of only on some raised areas before all the liquid had evaporated. 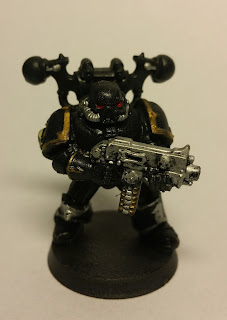 Glorious paint job with liberally applied unthinned globs of paint. Can this be remedied?

With a slight disappointment I decided to try the more traditional way of submerging the model in the liquid. One 25ml bottle was just enough to cover the miniature. This time the results were far better with paint literally peeling off into the liquid after only a few minutes of being submerged. After about 5 minutes I took the mini out and swept about 95% of the paint away with an old toothbrush. Another 5 minutes in the liquid after that removed the rest with a bit of help from a toothpick. 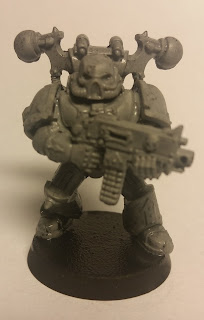 After about 10 minutes in the liquid the paint literally peeled off. Good as new!

This method of submerging also doesn't waste that much of the precious and darn expensive paint remover. I've stored mine in an airtight jar that I can use to dip miniatures in. After a few test minis there isn't any noticeable decrease in it's performance so I think it will last for quite long this way. There is quite a build up of paint on the bottom, but I'd reckon using a strainer to remove that would help.

All in all a wonderful product that really removes paint better than anything I've used before. It is pretty expensive though so I'd recommend storing it in a jar where you can submerge miniatures instead of wasting it by painting it on them. I still need to test it more to see how many times I can use the liquid before it stops working, but in the mean time this is definitely the best product I've seen on the market.