With the infantry out of the way the next goal in my Soviet project was starting on all the armor. I didn't fully get these guys done for our first game and their inaugural outing was without any weathering, but they are finally done! I actually got them done over a week ago, but never got around to finishing this blog post. Still here they are in all their green glory. 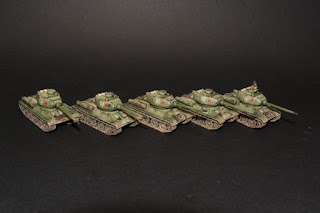 To get me through the first 500 point games I went for a force of 5 T-34's and some BA-64's to support my infantry. Both are from Battlefront, the T-34's being plastic while the BA-64's are resin models. Sourcing the BA-64's turned out to be quite a task as Battlefront wasn't able to supply them and they were out of stock on most online dealers. Few days of searching ultimately proved fruitful though with the required 2 blisters being found in Germany alongside some other sets that have been tricky to find. 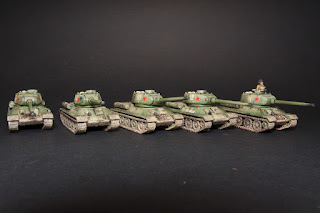 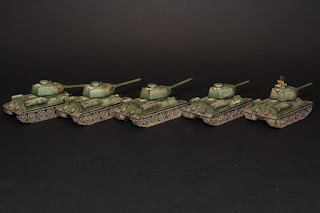 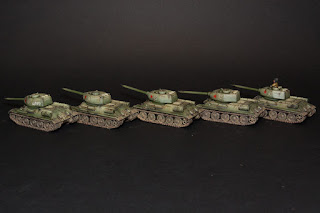 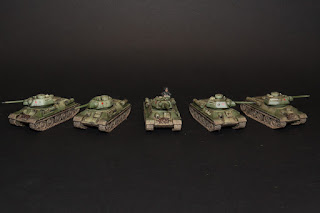 I went for a fairly heavy colour modulation on these guys like I do with all my vehicles nowadays. This time I didn't use Vallejo like I normally do, but rather decided to try out one of AK Interactives modulation paint sets as I thought it would be a simple way to get all the required shades. This turned out to be a massive mistake as the paint was probably the worst I've ever tried. All the colours had the pigment separated as a thick sticky paste and needed a few mixing beads and extremely vigorous shaking to have them anywhere near a paintable state. And it's probably not even just this batch as I bought their white and grey basecoats at the same time which had a similar issue. And some googling turned up plenty of horror stories of their quality control.

When I'd gotten them more or less mixed up and ready for painting some more problems started to arise. The paint would dry on my airbrushes needle tip every 15-20 seconds and required constant cleaning with a cotton bud to allow for painting. And the paint seemed to separate extremely fast so I needed to mix all the paint in the cup every few minutes by backflushing it with air. All in all the process took far longer than it should have with the constant cleaning etc. Not surprisingly it didn't take long for me to go online and order new paints from another manufacturer for when I'm going to paint the next bunch. 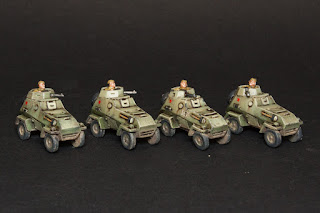 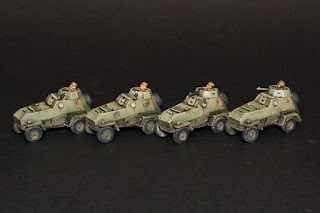 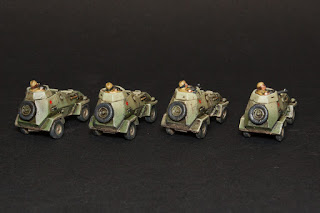 Rest of the painting was super simple as there aren't many tools or other details on the tanks. I slapped on some decals adding a few slogans on them as well as at least propaganda pictures often seemed to have tanks with some encouragement written on their sides. With the decals and some chipping added I went for an overall brown wash with enamels, followed up by wiping most of it off with the help of thinners after it had dried. As a last touch some additional streaking was done in a couple of different tones with a thin brush.

For mud I tried a new technique. I've been tinkering with Ammo of Mig's mud products, but haven't been completely happy with them as the results seemed a bit too even on previous tries. This time I added a bit of plaster in the mix to give it more of a body and applied it from the brush with the help of my airbrush. Getting the mixture on a brush and blasting air through it helped create a nice splatter effect and with all the stuff being enamel based it was easy to clean it up from unwanted areas with thinners. I'm pretty happy with the results and this seems to be far more effective compared to stippling it on with a brush like I used to do. The only downside is the massive mess I made with a lot of the splatter going everywhere else, but the tank. Luckily I'd had the foresight to cover my painting station with a cardboard before doing this so clean up wasn't too hard. It just meant that quite a bit of the stuff went to waste.

In the last week I've been keeping busy with another 6 T-34's just missing mud. I also got started on a 82mm mortar platoon and some Katyushas. When the tanks are finished I'll have enough of them for 750 and 1000 point games and the only addition needed for 1000 points will be the mortars. However I'm trying to get ahead of schedule a bit as at 1250 points I'll be needing a further 5 T-34's, 4 Katyushkas, 2 AA trucks and other support vehicles. With the games being every second week there is no way I'm going to be able to finish all that in time so better get started now to have any hope of fielding everything in time. 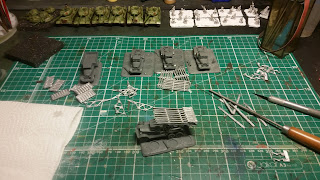 As a lighter ending to this wall of text here are some pictures from last Sunday :) Our dog was used to sire some puppies and me and the missus took a trip to the kennel to check out the little fur balls. A day of playing with puppies was definitely worth the couple of hours of driving and having to forgo my painting time. 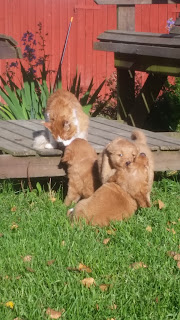 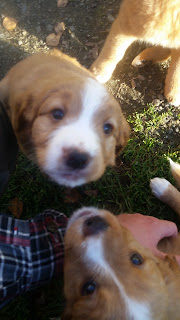 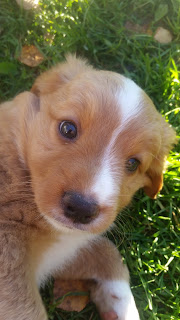 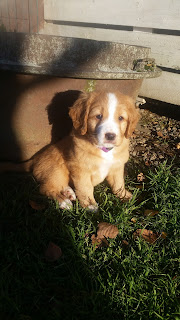 It's been a busy last few weeks with painting. We started a Flames of War escalation league at our club slowly going from 500 points to 1750 points, which has actually gotten me painting regularly for the first time in a long long while. Since the spring I've had periods where I didn't get any painting done for weeks and at best painted for maybe one or two days before having a long pause again. Now for the last few weeks I've been putting in an hour or two every day and it's actually felt great. The first few days felt a bit meh, but when I powered through it I actually started to really enjoy just relaxing while painting and sipping some good whiskey or craft beers. Hopefully this good flow will keep on going. 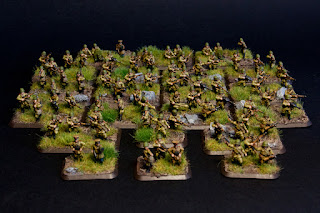 For my new army I'm building a Soviet Tankovy Battalion. I've been wanting to do a Soviet force for a while and actually bought most of the required infantry for a Strelkovy in early 2016, but the inspiration died of when Battlefront took nearly a year to get everything delivered and even 4 months to get the first blisters to me. I'd originally wanted to do a Strelkovy Battalion, but reality kicked in with the escalation league when I calculated I'm going to need about 250 infantry + masses of guns to have a decent list. So I took the easy way and went for a T-34 Battalion with some supporting infantry to get playing and maybe sometime upgrade to an infantry force. 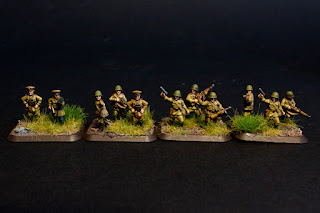 I started with some infantry as with 500 points a tank force really isn't practical in Flames of War. With a two platoon strelkovy company and a small machine-gun company and command stands I should have a decent basis for my force. All in all 76 infantry and three machine guns which took me the better part of two weeks to get finished. And with that it's only really representing about a third of the infantry I'd need for a fully fledged Strelkovy list and I'd still need about 20 guns with their crews on top of that. 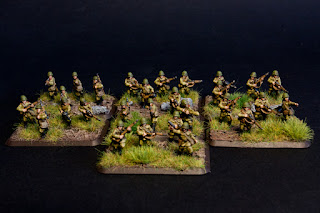 These actually aren't even the original infantry that I bought when I wanted to start my infantry battalion. I was planning on doing a Berlin themed force and will still probably build it sometime in the future. I'm leaving the metal infantry for when I continue on that and decided to get the cheap plastic ones for this league that I can also kind of test colours etc. on. BF plastic infantry is bit of a mixed bag. On some areas the detail is far superior to their metals, but then you get the normal restrictions of plastics and there are some really distorted areas and bad detail. Still for about 30 euros you get enough minis for two medium sized infantry companies so they're a really cheap way to build up a force. What you see here is actually only about half of the box so there's plenty of stuff in there. 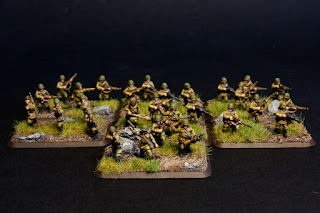 Painting them actually proved a bit challenging as most of the equipment is of a very similar shade. Trying to figure out which paints to use so that everything would stand out took a while and I actually ended up painting some equipment with "wrong" colour shades so that there would be more variety instead of having everything in various tones of Khaki. Not exactly historically correct, but looks better and I think I can always claim that they probably made equipment in that shade in some obscure factory far off in Siberia. And it's probably not even that far off as the Soviets really had massive variety in equipment shades etc. judging from what I've seen in different museums and online. 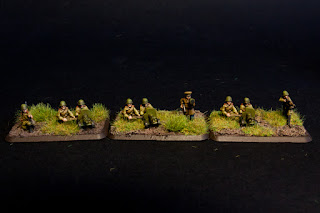 The project will continue with some T-34s and BA-64s. Almost done with them, just missing final weathering in the form of streaking and mud effects. With the missus being out of town for the weekend I should have plenty of painting time ahead of me in the coming weeks as well. Some more Alpha Legion almost finished on the table as well with just the bases missing so I have plenty to keep me busy.
Lähettänyt Samuli klo 19.32 8 kommenttia: