I've been a bit slow going through pictures from my camera, but I guess it's better late than never!

Finland's largest gaming event, Ropecon, was held again this year on the last weekend of July. A new venue, as the normal one is under renovation, was much more spacious as it was a convention hall, but unfortunately different things were very spaced out in different areas. Previously roleplayers, card players, miniature games and all the others were quite mixed up, but now all groups had more or less their own areas and not much intermingling seemed to be happening.

One of the highlights for me was a lecture by Finland's gift to wargaming, Tuomas Pirinen of former GW fame, about the process behind the creation of the Warhammer Chaos books that he authored in the 90s. Great stuff with some very nice background info on why certain gods have been developed the way they were and about different characters that he created for the universe. Having always been a follower of the Chaos Gods and of Nurgle especially it really gave some great insight into the faction. Also some John Blanche artwork was on show with original prints of images used in books and even some unreleased ones as well. Great lecture, too bad that he didn't have more time. And bonus points for dressing in character as he was in suitably chaotic cosplay garb at the convention. 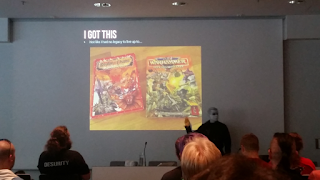 As usual our club was very active with multiple demonstration games in different systems. I ran Bolt Action again with a very Commando themed scenario, in addition to that there was another Bolt Action game for Africa around 1942, American War of Indepence with Black Powder rules, Dark Ages and Medieval with both Saga and Lion Rampant, Dropzone Commander and Infinity. So we had a pretty good selection showing different gaming systems in addition to the ones that had tournaments running (40k, Warhammer Fantasy, Age of Sigmar, Warmachine etc.) Unfortunately I forgot to take too many pictures of our tables so a couple of snaps of my own game will have to suffice.

I've run a fairly similar scenario before as well with British Airborne making a dawn assault from all sides on a German HQ building. This time simplified it a bit with the Brits just having to capture a trio of German characters and escape with them while reinforcements from a nearby German garrison would try to stop them. Games ended up being evenly won by both sides so I guess fairly balanced. Plenty of movement required by both sides so everyone got to be quite active and with a Commando themed game action was plentiful! 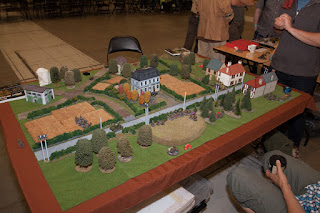 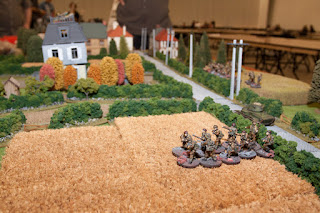 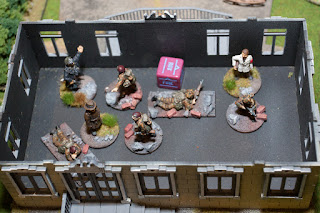 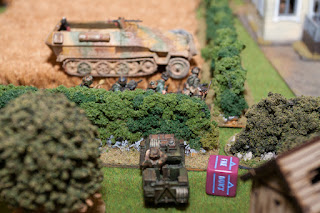 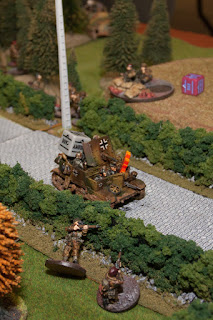 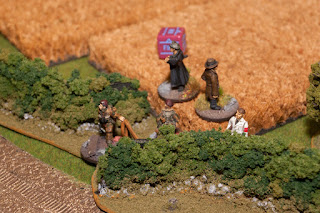 As always there was also a painting competition with some pretty impressive entries. Our club had a clean sweep of the competition with all prices except one being shared by two of our members. I snapped some pictures of my favorite entries from the competition. Funnily enough not too many shots of any of the winning entries except for the Warhound which wasn't by any of our clubmembers and which took the open category if I recall correctly. 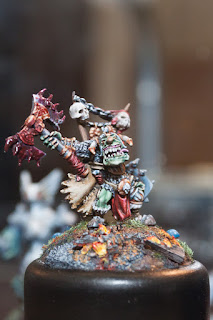 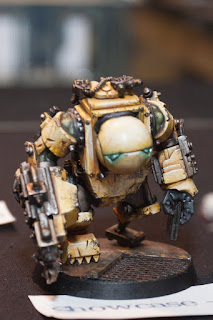 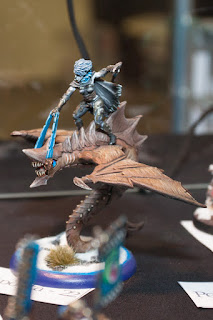 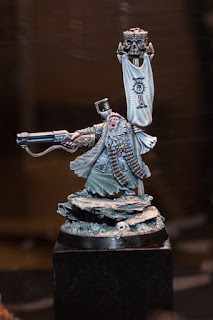 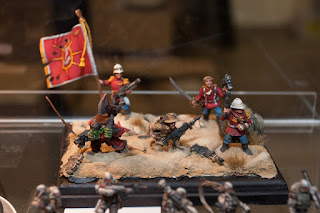 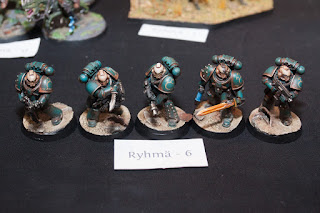 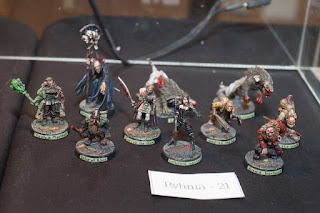 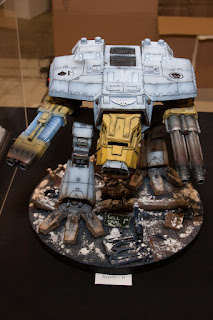 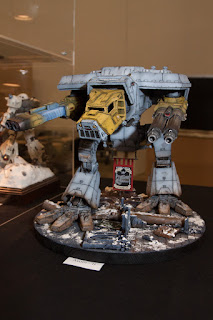 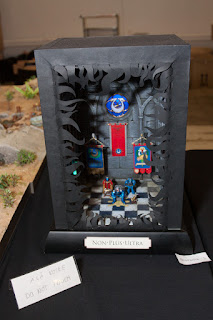 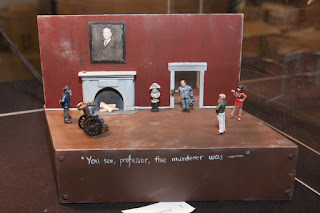 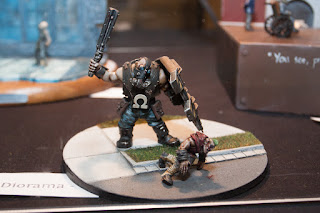 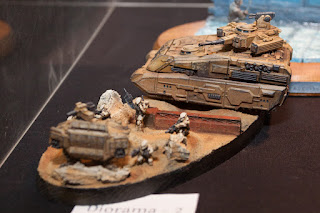 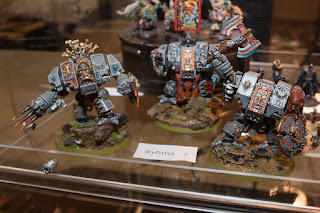 And finally pics of an amazing Mordheim table. A campaign was played through the three day event with couple of players vying for control of the fabled city of Mordheim. A nice choice as well as Tuomas Pirinen, who gave a lecture on Chaos in Warhammer, originally created Mordheim as a setting and the rules as well and was apparently very taken by the fact that it's still played and quite popular. 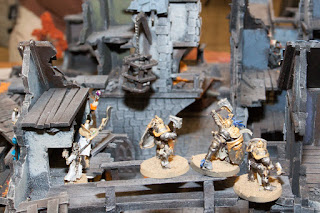 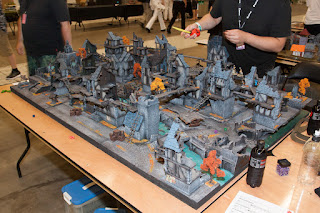 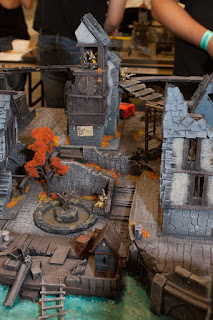 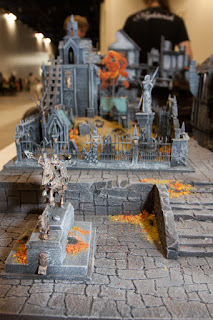 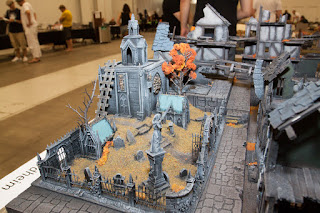 A couple of quick paintjobs to get back in the groove. These are both from the Reaper Bones range of cheap plastic minis. Overall quite nice and characterful sculpts with good detail. I especially like the face sculpted on the Ogres club, small details like this really bring the models to life. Still there are limitations and the production method was showing with some areas having detail that was obscured, like the legs of both minis) and there were a lot of mould lines to clean, but still for a few euros per model these are still a bargain. 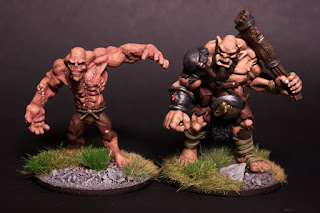 I wanted to keep them nice and fast to paint and with large skin areas that was quite easily achieved. A couple of highlight layers on the skin areas and everything else was just finished with a base colour, a wash and another layer of the base colour again. 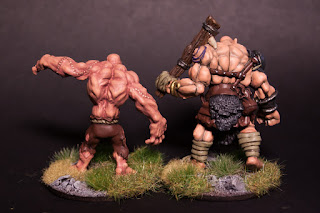 As I said in the last post I haven't really felt like painting for a long time for some reason. I guess it's partly to do with the fact that I tend to paint larger units at a time so it really starts to feel like a chore soon. Painting these two fellows only really took me a few hours and was a really nice change to my routine. And it was actually fun to paint again! I guess I should probably do this more often to keep my motivation up. Painting up large units at a time has it's virtues with projects advancing faster, but especially after last spring it somehow really wore me down.
Lähettänyt Samuli klo 15.33 10 kommenttia:

Getting back in the groove

My holiday is finally over and after a few days at work I've been getting back into the everyday rhythm. The five weeks went through like a breeze with a trip to France, some weddings and other occasions filling the calendar. And what free time there was was spent outside of home at our summer cottage. No real progress on the hobby front to report as I haven't really picked up the brushes since late June and only got in one game during the whole holiday period. I've been lagging behind following blogs as well, as my only internet access has usually just been my mobile phone. It's hard to realize how much cool stuff is published until you try to check everything once every two weeks and notice you have hundreds of posts to check out!

Our trip to France was fairly productive with one memory card full of photos from Hotel des Invalides, which really proved to be an excellent place to visit. Nearly one whole day was spent looking at everything on show and with Bastille day being only a few days later we happened to be there during an awards ceremony where some higher officers were given medals for their service. It was nice watching the parade and hearing some military music played by the band. After this post I'm starting to go through all the pics and editing suitable ones for the blog. Hopefully the break between posts won't be as long as the last one. 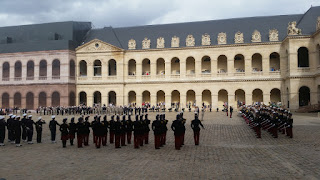 I've had somewhat of a painting block for quite a while now after the Painting Challenge finished. I powered through the Frostgrave stuff, but other than that I honestly haven't really felt like painting anything. I think part of it comes from trying to paint too large batches at once, and partly from not really having any project that currently really inspires me. Gargant mob went on a backburner until I can think of some good colour schemes for them.

To get something done I tried my hand on painting up some Panzer IV's that I'd bought second hand online with just a basecoat applied. The colour modulation went on great, but my green camouflage ended up turning out quite horribly as I just couldn't get the paint to flow out nicely and not drying up on the nozzle every 5 seconds. To add insult to injury I realized what had seemed wrong  about them the whole time as most hatches were painting in the wrong directions and some parts weren't where they were supposed to be... No wonder they were so darn cheap. Now they are on hold as well until I figure if I want to strip them of paint and do another camouflage job or just go on and quickly finish them and  buy some better models later on to replace them.

With them pushed to the back as well I picked a few prepped Reaper monsters as something quick to get me going again. Not much progress yet, but at least painting on the first skin layers on the ogre and golem didn't feel like a chore. Slow start, but it hopefully it will see me back in the groove and enjoying painting again! 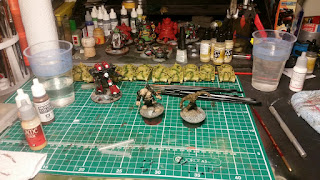