Haven't gotten much painting done after returning home, but I did manage to get all the stuff that I painted at the cottage based up and ready for gaming!

So I present the final installation of my Epic Salamanders project (at least until I end up buying more stuff). Some support units this time to round up the core force of tactical marines and terminators. Definitely nothing that would work in a tournament, but rather a more classic fluffy force of a reinforced company going into battle. The razorbacks and infantry models are old plastic creations while the rest are newer metal ones. It's a shame GW stopped doing these as the sculpting quality on the newest models really is quite amazing for the scale. 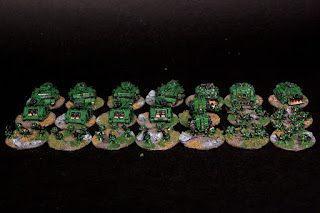 First up the Devastator squads with their Razorback support vehicles and two Dreadnoughts. These should provide a decent firebase to anchor the line. Not exactly accurate fluff wise as there are no heavy flamers or meltas present, but still it's hard to tell at this scale anyways :) 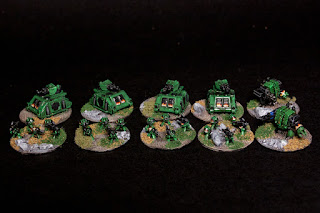 A trio of Vindicators to blast holes through fortifications and provide fire support for the assault. I actually need one more to field them as an individual unit instead of attaching single tanks to other formations. So if somebody reading this has spares I'd be more than happy to reduce your lead pile. 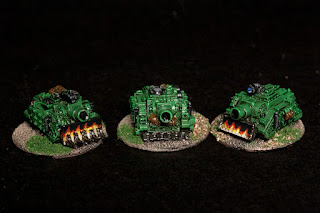 Then a unit of Predator tanks. Two each of the Destructor and the Annihilator variant. I skipped the flame details on these as I didn't really feel they had any suitable surface for them. And a black stripe seemed to make them pop much better. 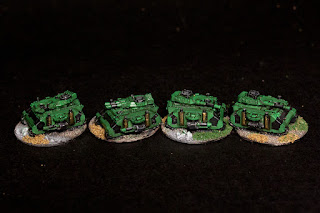 And finally a unit of assault marines. Not sure if they'll ever get any use as they aren't really in the Salamanders normal combat doctrine, but I had the minis so they deserved to get some paint on them as well. 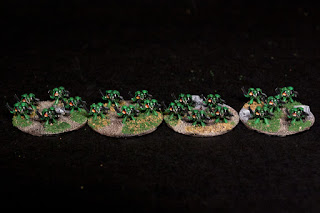 With these out of the way I'll sign off for a few weeks as I'll be visiting France for a friends wedding and for seeing the sights. After that it's off to the cottage again and starting to prepare for the biggest wargaming event in Finland, Ropecon. So thanks for reading and have a good holiday everyone! I'll be back sometime in the end of the month.
Lähettänyt Samuli klo 23.17 8 kommenttia: