Back in business with something totally different this time. I'll let a gem of Australian TV introduce my subject this time!


So with the formalities done it's time to present my Sturmpioniere! I was cleaning the cabinets last weekend and came upon a box full of readily based and built Germans. When people at my club got into Bolt Action a couple of years back I quickly built a large Red Devils force and figured I'd build a German army as well to have the opposition ready as well. I built a  large force, but only really got a few squads painted before something else came up and they got packed away. With a Bolt Action game day coming up and I promised to run a scenario, I figured it would be a good time to paint them now that I uncovered them again! 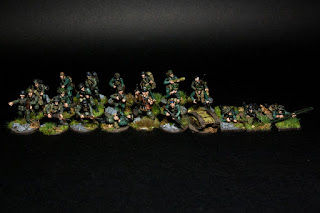 So 23 foot miniatures and the Goliath demolition vehicle, which probably counts as another infantry figure as well as it's rather tiny. 120 more points to add to my target. I'm still a bit behind schedule, but with over 600 points out of 1000 I'm starting to feel a bit more confident about being able to reach my target. After these there's still most of the support weapons left, but as I don't really need them for the scenario they will unfortunately most likely just go back into the cabinet. 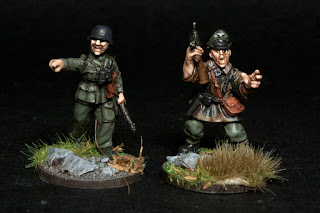 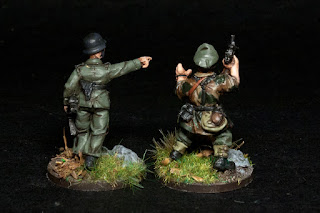 All are from Warlord, with most minis from their Pionier box. I spiced them up with some head swaps and some later equipment from the Grenadier box. The officers are metal offerings. The plastics are pretty nice, but I still prefer the metals that Warlord has. Much more character! Paint job wise I went for quick and dirty again with a wash and highlights for the uniform and major equipment. I had an autumn theme running on the previous germans bases so continued with the same on these.

With the end of the challenge looming I really need to start finalizing some projects. I have a lot of Epic Armageddon started that I've been slowly painting every now and then. My Curtgeld entry is still in it's infancy with the models cleaned, but nothing else done. Add to that the random single minis that I have on the desk.

As an afterthought this is pretty much what I had in mind when going through my cabinets... Too many projects, too little time! Probably should minimize random purchases, but that would be slightly boring... 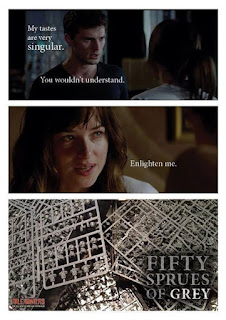 I'm lagging behind a bit on posting my challenge entries here, but I guess it's better late than never!

First up the six basic survivors from the new Zombicide Black Plague box. I'd promised myself not to buy anymore Zombicide as I have all the boxes and quite a few extras from previous kickstarters, but then those dastardly guys decided to do a medieval version! The sculpts seemed a lot more characterful than the previous "modern" Zombicide sculpts and there were plenty of great looking heroes and special monsters. When they showed a few Monty Python themed sculpts I was finally sold and pledged for the whole deal!

The basic game arrived just before christmas as they had the boxes ready and apparently wanted to give an early christmas gift to the backers with the rest arriving in February. Not surprisingly in late January we were informed that items wouldn't arrive before June/July and the main boxes would go on sale at stores already. 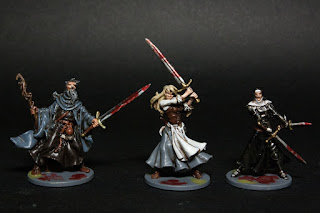 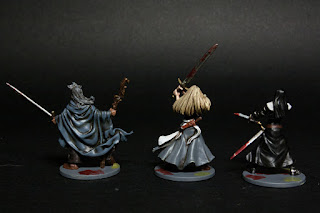 I hadn't painted any Zombicide stuff previously, but figured that these medieval versions deserved a bit of paint. I'm probably going to paint up all the heroes at some point when they show up. I went for a simple paintjob as they are only really going to be used with Zombicide and not in normal miniature games. So block painting, a brown wash and a single highlight on the largest items. Finally some blood and slime effects thrown on the weapons and ground. 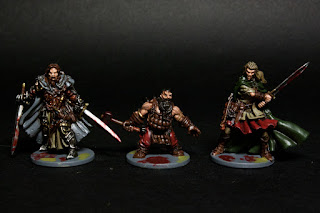 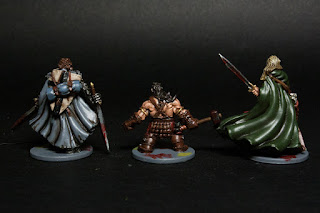 The second entry of last week was another Saxon Regiment. This time Regiment Prinz Maximillian and it's first battalion. After this unit it's Regiment von Steindel and with them done I have all the line infantry of the 1st Division finished. Not sure what units I'm going to paint after that. A change from the line infantry could be nice so I might try my hand at converting some Uhlans from regular Chevauxleger miniatures. 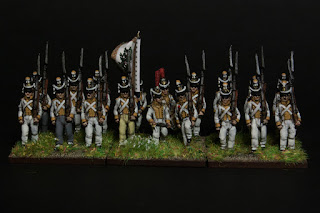 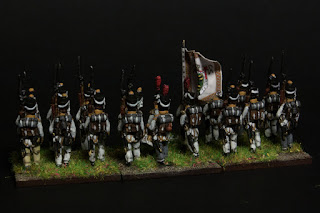 Last week I actually managed two entries, even if one of them was only a small one with one miniature!

First up is a limited edition Citadel Chainsaw Wizard sculpted by Aly Morrison in 1987. A suitably wacky sculpt that was fun to paint for a change! I've been buying up some of the old citadel limited editions whenever I see them going for sale on eBay or somewhere else for reasonable prices. Slightly embarrassingly most have been waiting for paint for very long times. With that in mind I figured I should prep a few of them for the painting challenge and paint them up between other projects every now and then. With the chainsaw wizard done I now really need to start looking for his long-range counterpart the submachine gun wizard! 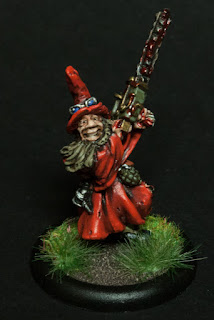 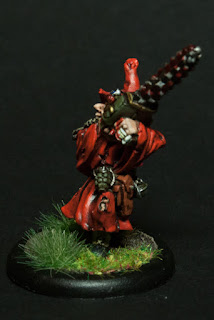 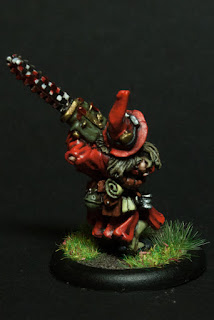 The second entry of the week was 10 additional halftracks for Flames of War. 5 M3 tracks for the armored rifle platoon that was finished a few weeks prior, 2 M2 command halftracks and 3 M4 81mm mortar carriers. With these done I'm only missing 4 M10 tank destroyers and some odd weapons stands for when I choose to dismount the mortars or some of the MG's from the infantry half-tracks. 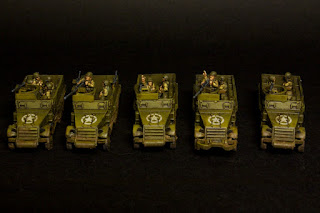 With the plastic infantry I was complaining about the appalling quality of the sculpts and moulding, but compared to them the plastic halftracks are actually a very pleasent surprise. I find them far better than the resin vehicles that Battlefront makes. Detail is very crisp, they go together very easily and all in all were quite a joy to paint. And I think the same can be said for most of their other newer plastic kits as well. Apparently even the plastic soviet infantry is quite nice. Practice goes a long way in helping improve the kits, and they seem to have gotten the hang of it by now. Hopefully they'll go around updating some of the first plastic kits in the future as well.

Painting wise I went with my trusted method of Brown Violet with dark yellow modulation. After details were picked and chipping applied, a liberal brown enamel wash was applied which was then wiped of when it had dried. Getting the modulation right really does seem tricky as before the wash I'm constantly thinking that I went too far and the effect is too stark. But now after the wash I'm almost wishing I had gone for even more contrast.

That's all for Flames of War US forces for a while now. I have nearly everything for my Mid War list as well and the only really missing pieces, the M10's, can easily be proxied with other TD's. I'll finish them up closer to the European Team Championships when I've gathered more motivation to paint olive green again.
Lähettänyt Samuli klo 9.25 6 kommenttia: