Quick update after getting home from setting up for tomorrows game. An astute reader might guess which battle is about to take place :) As a more clear clue 3 large farms and one town will see about 6000 small lead men battle for supremacy in what will be the main Napoleonic gaming event of the year for us. Stay tuned for more :) 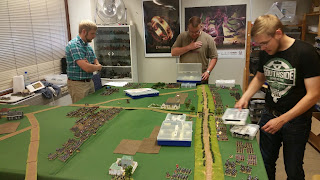 Book review: The Battle of Maida

Not much going on on the hobby front due to travel, wedding season and other holiday activities keeping me away from home and the painting station. I have however had quite a bit of time to read for a change.

I received a copy of Richard Hopton's Battle of Maida: Fifteen Minutes of Glory from Jonathan Freitag's 500 posts and 5000 comments commemoration draw at his blog Palouse Wargaming Journal. I'd read a bit about the battle already previously, but was keen to know more as it was one of the first instances where the English managed to defeat French troops in the field and also saw action between Swiss and Polish troops against the Brits. 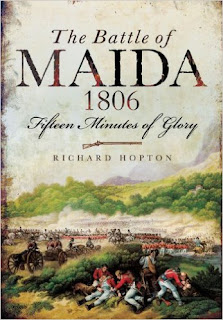 The book devotes the first half to setting the background for the battle explaining the situation in southern Italy and the formation of the Third Coalition. Major commanders are also introduced and their backgrounds are explained. Especially on the British side there were many commanders who would later play important roles in the Peninsular and Waterloo campaigns. For example General Kempt (then Colonel) makes an appearance leading the Advance Guard which played an important role in winning the battle. The background section was well structured and gave a nice overview of the lesser known parts of the Third Coalitions actions as normally Austerlitz and the actions around it take the center stage.

Stuart's expedition into mainland Italy is handled in the second half of the book. With the Royal Navy in complete control of the seas Stuart was able to transport his small army of roughly 5000 infantry to Sant'Eufemia to threaten the supply lines of General Reynier who was fighting against a guerilla uprising in Calabria. The book does not paint a very flattering image of General Stuart instead showing him as a man without much of a plan, who abandoned his defensive positions to attack a numerically superior enemy and was saved by the competence of his subordinates and some luck.

The battle commenced when Stuart moved out to attack Reynier at the same time as Reynier had moved out from his positions in the high ground to attack Stuart on the beach. The two armies met on the plains with both of them deploying in line. The Brits held superiority in artillery, while the French were the only side to possess any cavalry. Reynier being dismissive about the British fighting quality after his experiences in Egypt sent his troops forward using his veteran regiments as the spearhead. What follows would go down in history as Kempt's advance guard turned the French veterans with two volleys fired at point blank range and followed by a bayonet charge. On the rest of the battlefield things weren't going as well for the British, but the timely arrival of 20th Foot on the French flank turned their advances there in to a retreat. The lack of cavalry on the British side would hamper their efforts to truly follow up their victory as a proper pursuit was not possible with the French cavalry and Swiss troops performing an effective rearguard action.

The battle was nevertheless a resounding success for the British with only 45 dead and roughly 300 wounded they had managed to cause massive casualties to the French who suffered around 700 dead and between 1000-2000 wounded. In addition to these casualties the French would suffer heavily at the hands of guerillas when retreating towards their main forces to the north. The British casualties were exceptionally low for the time and of those casualties over half would be suffered by the 2nd Brigade consisting of Highlander's who were new recruits and had to face attacks by French cavalry and artillery. Interestingly the Brits suffered more dead in the coming days as after the victory they billeted in a swampy area and many soldiers caught malaria which would end up killing far more men than the actual battle.

The end of the book handles the British advances in southern Italy after the battle, which helped to remove the threat of a French invasion of Sicily for many years. This would prove to be important as Sicily provided the Royal Navy with an important base of operations in the Mediterranean from where to control the seas.

All in all I really enjoyed the read and would recommend it to anyone interested in the Napoleonic era. It comes across as a very thoroughly researched book and highlights an area of operations that is usually shadowed by the larger battles that were going on at the time. For the British it was an important victory that would give them confidence when Napoleon otherwise seemed unstoppable. It is also one of the few Napoleonic battles that is actually honored in England with an area of London being named after it with the only other ones being Trafalgar and Waterloo.

And once again thanks to Jonathan for the generous gift! Truly provided good entertainment on a rainy day at the cottage.
Lähettänyt Samuli klo 9.49 2 kommenttia: