With my summer holiday over it's time to be more active in the hobby field again. A month away from work was definitely needed as I was really starting to feel fairly burnt out and frustrated about everything. Couple of weeks in Canada and a few weeks back home spending time with friends, going out, watching movies etc. really did a lot to help bring back some long lost motivation for work, and for painting as well. I've been back to work and a normal routine for about a week now and painting has actually been really enjoyable for the first time in a long while.

First up are some more additions to my Flames of War US forces in the form of a Pershing platoon. A late war entry these didn't really reach troops until the final months of the war and even then only in small numbers. Still it's an iconic tank that saw much use in Korea and formed the basis of further US armor development into the Patton series, so I had to have some. From gaming point of view these are pretty bad to be honest. They are very expensive points wise in Flames of War, but still pretty vulnerable to larger late war AT guns. Fielding more than 3 is nigh impossible and they aren't too survivable then.  Still fun to field every once in a while for a themed list. 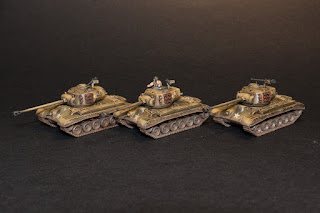 These guys were nearly done before I left for Canada, but with the mud effects taking hours to dry they weren't quite finished in time for that. Still it was a good way to start getting back to painting by just slopping on some finishing touches and varnish to get these guys ready. 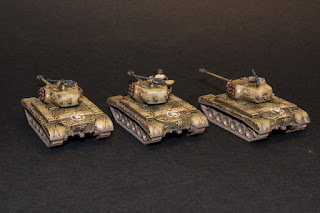 I followed my normal recipe for US vehicles with a suitable green basecoat with dark yellow modulation. Some chipping and enamel washes for weathering followed by liberal coats of mud. Still haven't really fully figured out the Ammo of Mig mud products that I've started to transition to. They feel a bit too liquid to me and don't really have much texture so building thick coats of mud seems tricky. They've nowadays come out with some thicker stuff as well, so might have to give it a try or then try to mix in some very fine sand to add more texture and grit to the ones I already have. 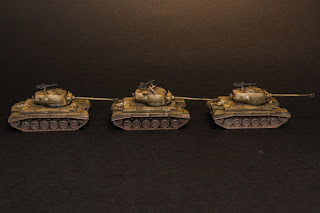 Aside from the Pershings I've finally received my Skaven Blood Bowl team from a Willy Miniatures Kickstarter and been putting them together. I'd opted for a Deluxe box which included a pitch and transportation foam. After some mishaps those who did so ended up receiving their stuff about three months after everyone else. If I'd known before hand I would have just taken the minis, but originally everything was supposed to ship at the same time.

Alongside Skaven I've been continuing on the next Chaos Space Marine squad. Most of the time consuming work is finished with all the details picked out and the tedious edge highlighting done. I've still got decals to apply and chipping to add before a final panel line wash to make those pop out better. I probably should have gone for a slightly faster scheme to paint, but I do enjoy the look so maybe it's worth the extra time. Hoping to finish them of within a week or so, though a friends wedding this weekend will reduce available hobby time quite a bit. 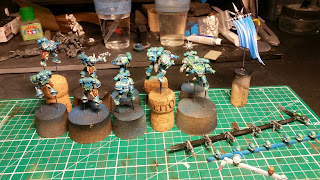 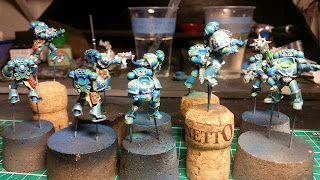 From a hobby point of view it's forming up to be quite a busy autumn. We have a Flames of War escalation league starting to get new players in and for us older players to start new armies. Also a Shadow Wars Armageddon campaign starting which I was planning to take part in. And finally we are planning to start our 1813 Napoleonics campaign that we'd originally already planned for 2016. So there should be plenty of gaming and painting ahead and hopefully I'll be a bit more active updating the blog as well.
Lähettänyt Samuli klo 15.16 3 kommenttia: