Back to 40k and blogging! Painting has still been slow with computer games like Steel Division and Battlegrounds taking much of my free time lately. But with the 8th edition of 40k coming out and massive hype at my club and online it's really rekindled my interest for my Alpha Legion project so I dug them up and continued from where I left previously! 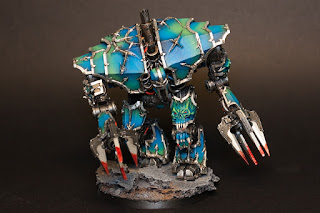 I started by continuing on the Rhino which was left in a WIP state previously, but like last time I wasn't completely sure about the aesthetics that I went for. Originally I thought a rust base coat and chipping fluids would be a cool idea, but now the vehicle just feels too 'messy' compared to how the rest look. So I put it aside until I figured what to do with it. I hate removing paint, but with an airbrush job covering some of the chipped areas will be a pain in the ass. Luckily most of them are on the lower areas and will be covered by mud anyways, but I'll let that simmer for a while until I get  some inspiration. 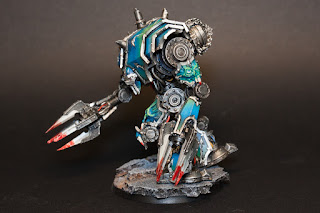 So with the Rhino pushed out of the way I went for what is probably my favorite Daemon Engine, the Decimator. It's like a massive mean version of a regular dreadnought that really looks chaotic, but doesn't go overboard like some of the funkier dinobots. Like many Forge World models, fit wasn't always perfect and it was extremely fiddly to put together as it's really top heavy and connection points were tiny. Plenty of pinning and green stuff helped though and now it feels pretty sturdy. 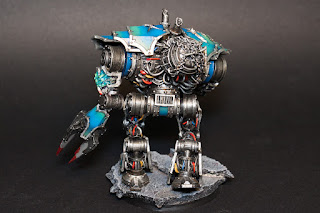 I was thinking about different variations on the green accents with more realistic highlights, random splotches etc. but just ended up going with highlighting panel lines and corners. Outside of that it was a fairly simple job of painting all the steel areas, picking out some cables in different colours and highlighting the demonic features on his armor. I added some dusting and rust effects with pigments, but didn't want to go overboard so left it pretty light. Likewise the base was kept simple, partly not to take too much away from the model and in part, because there  really isn't much room even on a 60mm base as the model really is that huge. 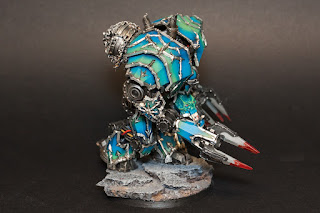 Outside of that I started applying paint on another squad. All the airbrush work is now done, next up it's all the steel pieces and then some edge highlights. That will have to wait a few weeks though, as I'm starting my summer holiday in a few days with a trip to Canada to visit my parents and tour Quebec for a little over a week. Might squeeze in a bit of hobby time before my departure, but that will probably go into some nearly finished Flames of War things. After the trip I'm going to try to get back to more regular painting and blogging, but we'll see how I'm feeling after a short holiday period. 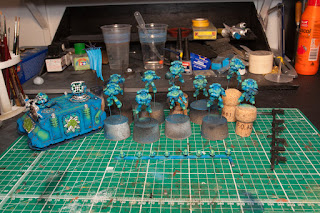