It's been pretty quiet for the last few months miniatures wise for me, but I finally got around to finishing up a bunch of minis that had been lying around on the desk in a half-finished state for ages.

I used to play a lot of 40k in the early 00's during 4th edition, but my interest died down in my late teens alongside other hobby interests as well. I still played a lot of the 40k video games and loved reading the novels from Black Library, so it probably isn't that surprising that I'd eventually be drawn back in. Unfortunately in my silly youth I went and sold my Imperial Guard and Death Guard armies so getting back into playing has really required me to build an army from scratch again. I actually started with Tau a few years back, but after a few units I realized that they are not for me and dropped that. Fast forward some more years and on a random whim I ended up walking away from my local store with a Dark Vengeance box in my back. Being a fairly devout follower of Chaos it seems that I just couldn't resist the lure of the dark gods any longer. 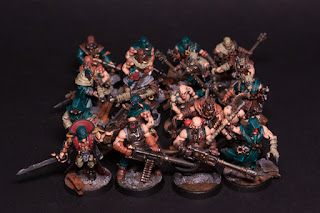 I've actually been pretty lazy in painting these as my relapse into 40k has been more of a modelling hobby until now as I've just been randomly kitbashing miniatures from various different Space Marine and Chaos Space Marine kits, but never really putting any paint on them. But with a club 40k campaign starting this summer I figured I'd finally get to painting them as well. To start of easily I picked the Cultists as my first unit before venturing into Chaos Space Marines themselves.

I set myself a target that every single model should have at least something converted to set them apart, with parts taken from multiple kits being the minimum requirement. However with these guys I kind of cheated as many of the sculpts are a bit more difficult to convert as they are snap fit models. So only a few simple weapon and head swaps on them, and otherwise they are mostly just straight out of the box.

These were actually painted all the way back in May for most parts with only the bases and weapons being unpainted. With my slump in hobby motivation they were pushed into the back of the painting desk and left gathering dust until I finally pulled myself together this week to finish them up. I wanted to keep the paint job fairly simple and tried using mainly edge highlights to bring out detail. I still need quite a bit of practice with that as some colour choices were probably a bit too stark and my brush work wasn't always tidy enough. Still from a normal gaming distance they look quite nice. 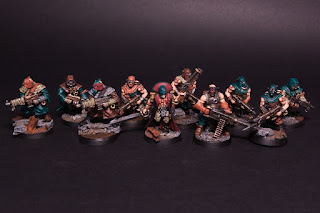 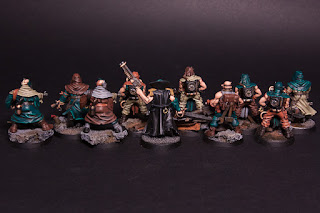 I wanted my force to have a rubble basing theme so I filled the bases with cork pieces, kickplate shaped plasticard and some different plastic profiles to represent fallen debris etc. After a basic drybrushed paintjob I went over them with different pigments to vary the shades and especially to simulate heavy rusting on the metal areas. Turned out quite nicely at first, but when it came time to varnish the minis a lot of the pigments sort of blended into the miniatures. I had used pigment fixer on them beforehand, but apparently not enough as the varnish diluted them again. As with the edge highlights I really need some more practice with pigments as well. But at least they seem pretty promising for tasks like this. 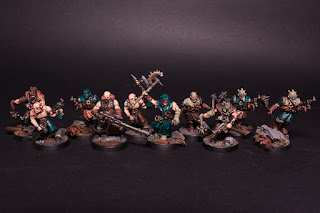 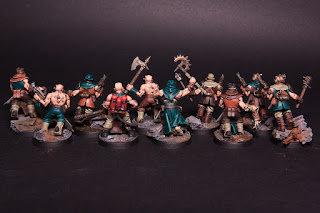 With these done I finally have a much emptier painting desk. I've had so many things in a WIP state on the table that it's actually sapped a lot of my painting motivation away. I've packed most away from sight and hopefully just having a few things on the table won't seem so overwhelming all the time.

Hobby progress will continue to be quite slow throughout the coming months as hunting season started again in the beginning of August and I'm in the woods for most of the weekends until December. It's also my dogs first proper hunting season as he's starting to be old enough to take with me on trips. With a bit under two years of age he is still quite overeager at times, but hopefully more practice and age will help. 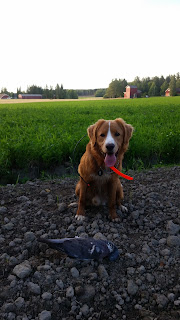