The first 7 vehicles for my autumn project are now done after the addition of some mud and grime. 5 M5 Stuarts to function as the support for my Tank Destroyers and two M20 armored cars to fill in the company HQ slot.

The Stuarts are way out of their league in Late War, but they are dirt cheap and fast zippy tanks with AT7 and Stabilisers can cause some headaches if they get to your rear. So a perfect addition to a tank destroyer force that doesn't really focus on staying power, but more on just messing up your opponents plans and attacking from unexpected directions.

These are Plastic Soldier Company offerings and are extremely well made with nice crisp detail. The only real gripe I have with them are the guns. Thin plastic is always fiddly and two of mine are slightly bent from their removal from the sprue. Switching to a metal barrel would probably have been a good thing. All of them have quite a bit of stowage thrown on from a few different Battlefront kits. Metal stowage really adds some nice weight to them as normally the PSC tanks can be quite flimsy.

I tried to add a bit of colour modulation with a yellowish tone, but it doesn't show too much after all the washes. After the basic colours I gave them a quick drybrush, painted the details and went overboard with the enamel washes. I put in a few different shades of brown and dark red letting them set in before swiping most of with cotton buds. I then added minor streaking here and there to show them worn down. Finally generously applied mud with Marutechnics Easy Mud. Nice easy and fast job, though it took me over two weeks to get them done as I haven't had too many hobby days available. 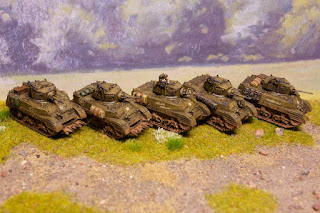 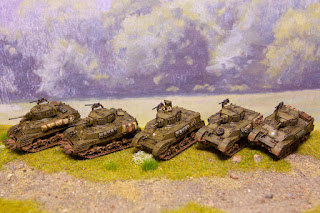 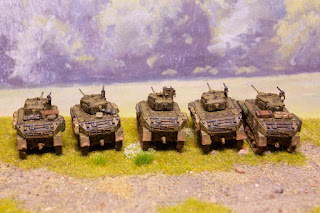 The second set was two M20 armoured cars from Battlefront. I already had 4 of them in the security detachments, but needed two more for the HQ. Conan and Demon will be guiding my company forward while keeping out of harms way. Again base colours applied by airbrush before being finished with a drybrush, enamel washes and loads of mud. 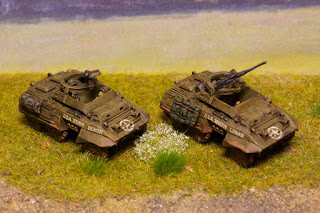 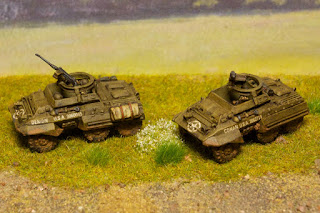 It was fun to paint something quick again. I've really been having quite a painting slump since May as time has been at a premium and after a push of over 250 15mm Naps I wasn't feeling like painting too much. Hopefully now things will get rolling again. I still have a few half finished projects on my desk, some dating over a year back. I guess I should dedicate a few hours to them as well to clean my work space and have some quick successes with finished figures. Still that will have to wait for a while as I have now about 2.5 weeks to paint up a full Armoured Rifle Platoon and a Cavalry Recon Platoon. The Infantry are about 40% done, but then there's the 9 vehicles that need to be started still.
Lähettänyt Samuli klo 14.45 8 kommenttia:

I'm getting back in gear after my late spring Napoleonic push and all the Flames of War hassle due to the European Team Championship. I'm not straying far though as the preparations for next years ETC are already starting. The chosen period is Mid War this time and I'm planning to build up an Armored Rifle Company as mech players are always a bit harder to find and I already had most of the stuff needed available as I'd been planning to build up the same company, but for Late War.

In addition to the ETC prep for next year we are running an escalation league for Flames of War at my club starting from 500 points and increasing the list sizes every two weeks until we end up at full-fledged tournament list sizes. The chosen era is Late War, but luckily most of the stuff overlaps with Mid War US equipment anyways. I will be building a Tank Destroyer Company to utilize my Hellcats that I normally have in support of my Paras.

To plan my painting efforts a bit better I put together a little excel sheet to track my progress. I'll first build up the Late War Tank Destroyer list and then add the few extra units that are needed for Mid War. Most is already bought. The only things I really need are the M10's, some command miniatures and a few Jeeps. I'm still contemplating about painting up dismounted mortars and heavy machine guns. They will be useless most of the time, but then again if I skip them I'm sure to need them. 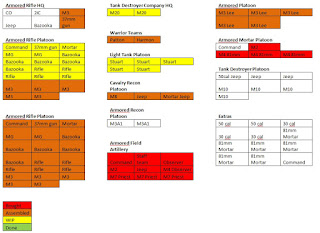 Painting is well underway with the Stuart's and the M20's almost finished. I only need to wait for the enamel to dry and then add some mud and they are done. While they are drying I've already gotten started on all the infantry stands of one Armored Rifle Platoon. 15 stands and 5 half-tracks per platoon are quite time consuming, but I guess batch painting should do the trick.