My slowly growing 40k army gets some more reinforcements with another regular Chaos Space Marine squad. As I was planning on building roughly a 1800-2000 point army and keep it at that this should be the last regular Core choice, at least for a while before I've played some full sized games. Still a Havoc squad and Terminators to do as well as character models, but outside of that it's mainly just vehicles and Daemon Engines from now on. 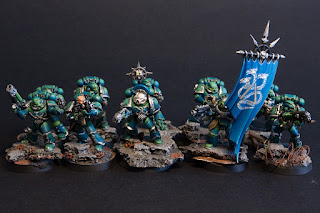 As with the previous unit plenty of kitbashing with pieces from different plastic kits from three decades and some 30k Forge World Alpha Legion bits thrown in for flavor. Some minor conversions as well pieces cut off and mixed between kits to vary identical parts somewhat.

Like with the previous unit main colours were done with an airbrush followed by picking out details. I cut down a little on the edge highlights compared to the previous unit as they are just a pain in the **s to do and getting clean  edges just seems nigh impossible at times. Concentrated on the most visible areas  now to save a bit of time, while still keeping the same look as the other minis. Worked out rather nicely so I'm going to continue with the same on the final minis as well. 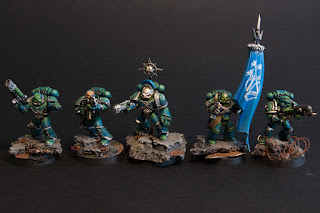 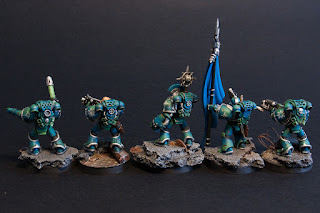 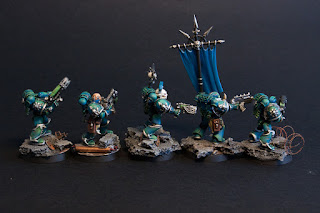 I bought some new paints in late spring from a fairly new company from Cyprus called Warcolours. I've been tinkering with them lately, but haven't really painted proper until now. They seem to be more gel like compared to the Vallejo I normally use and dry a lot slower as they are meant more for wet blending etc. compared to traditional layering painting styles. I decided to try them out on the banner to see how easy  it would be. Smooth blends are something I've always struggled with, but boy these paints really seemed to make it easy. As they dry slightly slower and are more translucent than Vallejo it was really easy to feather out the edges between layers. In real life the contrast differences are a bit more stark than on the photos, but hopefully they still show the effect. Considering that I did that with 4 different shades in less than 10 minutes the results are pretty nice. With more practice and time really smooth highlights shouldn't be too hard to achieve. I'm really starting to like these paints more and more, the colour selection is aimed more towards fantasy and sci-fi with strong vibrant shades so not that great for historicals, but for other subjects should be amazing. Especially on larger smooth surfaces these are superior to Vallejo and so much easier to handle once you get used to the different properties compared to more traditional paints.

Decal wise I used a combination of Games Workshop and Fallout Hobbies decals as well as a 30k Alpha Legion decal for the unit's Icon. Everything else went on smoothly except  for the Forge World one. I've had issues with their decals previously as well as they are extremely thick, but still somehow they seem to be quite brittle and crease easily as well. Getting that hydra decal on the wavy flag took me nearly an hour to get it to sit straight and set into every crease. It seemed that the moment I though I had gotten everything to stick correctly some corner had moved  and lifted from the flag. With massive amounts of decal softeners and setters I finally got it to sit straight and covered it with a thick varnish layer that smoothed the surface out to remove most of the creases. 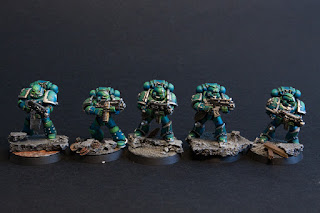 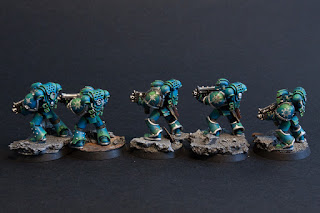 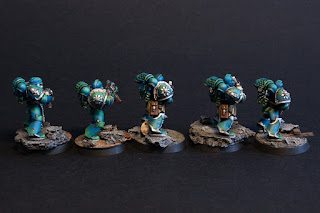 With these guys finished I'm probably going for a Daemon Engine next. I have a Helldrake and a Maulerfiend prepped up so going to start with one of them unless something else grabs my attention. We also have a Flames of War escalation league starting in September so I really need to start to prep and start painting for that as well. I'm going with a Soviet Tankovy so plenty of T-34's in store throughout the autumn.