We played the second game of our Russia 1812 campaign last week which saw the reluctant combined Austrian and Saxon armies attacking a Russian rearguard in support of the main French advances which were threatened by the attacking forces of General Tormassov in the south.

Another report of the game can be found through the blog of a fellow club member Jaakko: Napoleon Complex Gaming Historically Tormassov had defeated Reynier's Saxon Corps in the south and threatened the French flank. To counter this Napoleon ordered Austrian Prince Schwarzenberg to unite with Reynier and defeat Tormassov. Schwarzenberg had avoided battle with the Russians, but was now forced to fight. Tormassov gradually retreated south and deployed his men across a marshy plateau close to Gorodeczna.

Our game saw the combined Saxon and Austrian army try to push through the defending Russians and attacking with roughly a 2-to-1 advantage in manpower. The Saxons were deployed on the far right conducting a flanking attack, while two colums of Austrians were to attack the Russians over a river front. 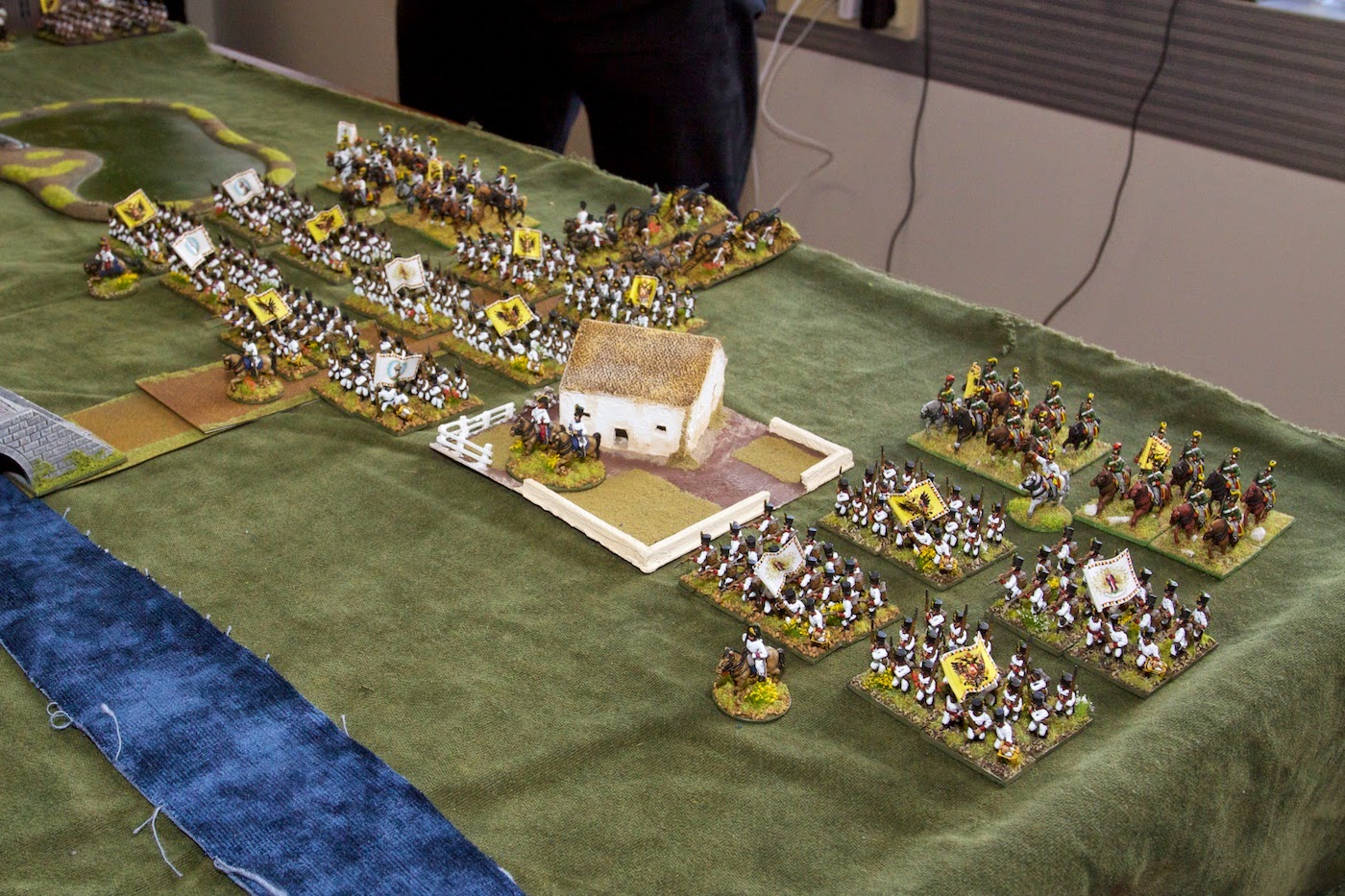 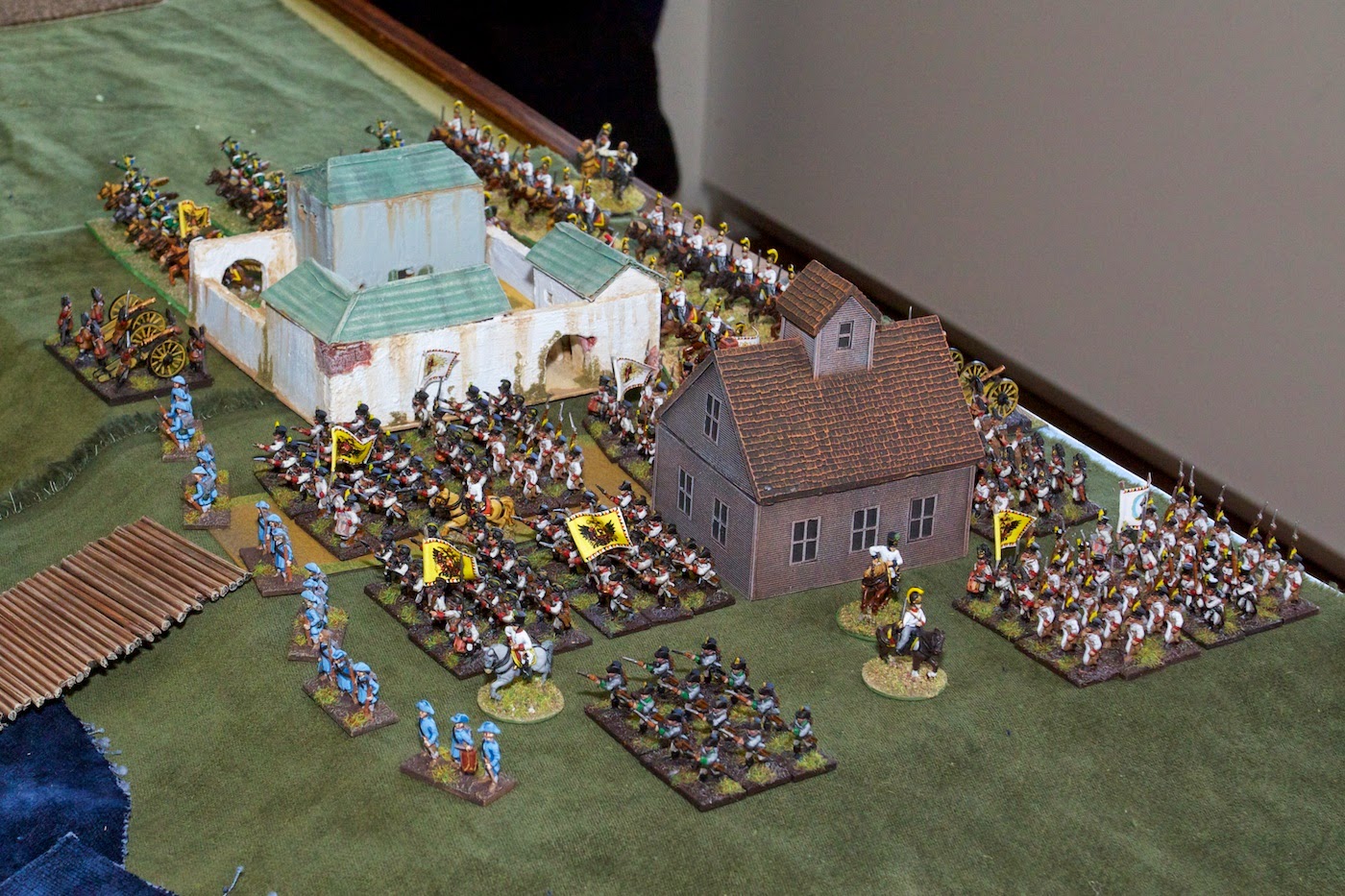 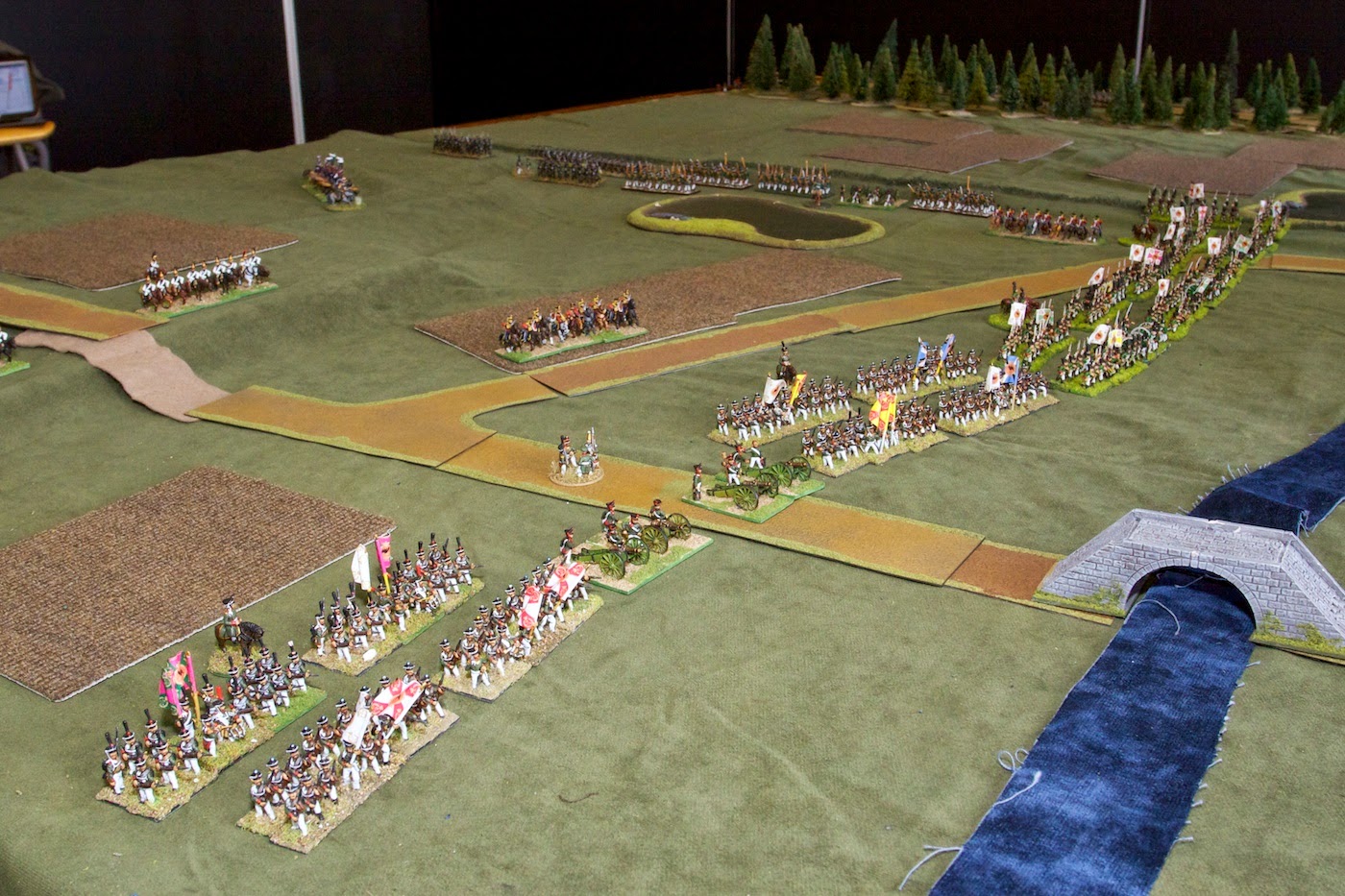 The game began with the Saxons slowly advancing towards the defending Russians. The plan was to tie down the Russian flank before Seighenthal's and Frimont's divisions would attack over the river. However due to the slow advance of the Saxons an attack on the Russian lines was started by both Austrian commanders before the Russian flank was occupied. 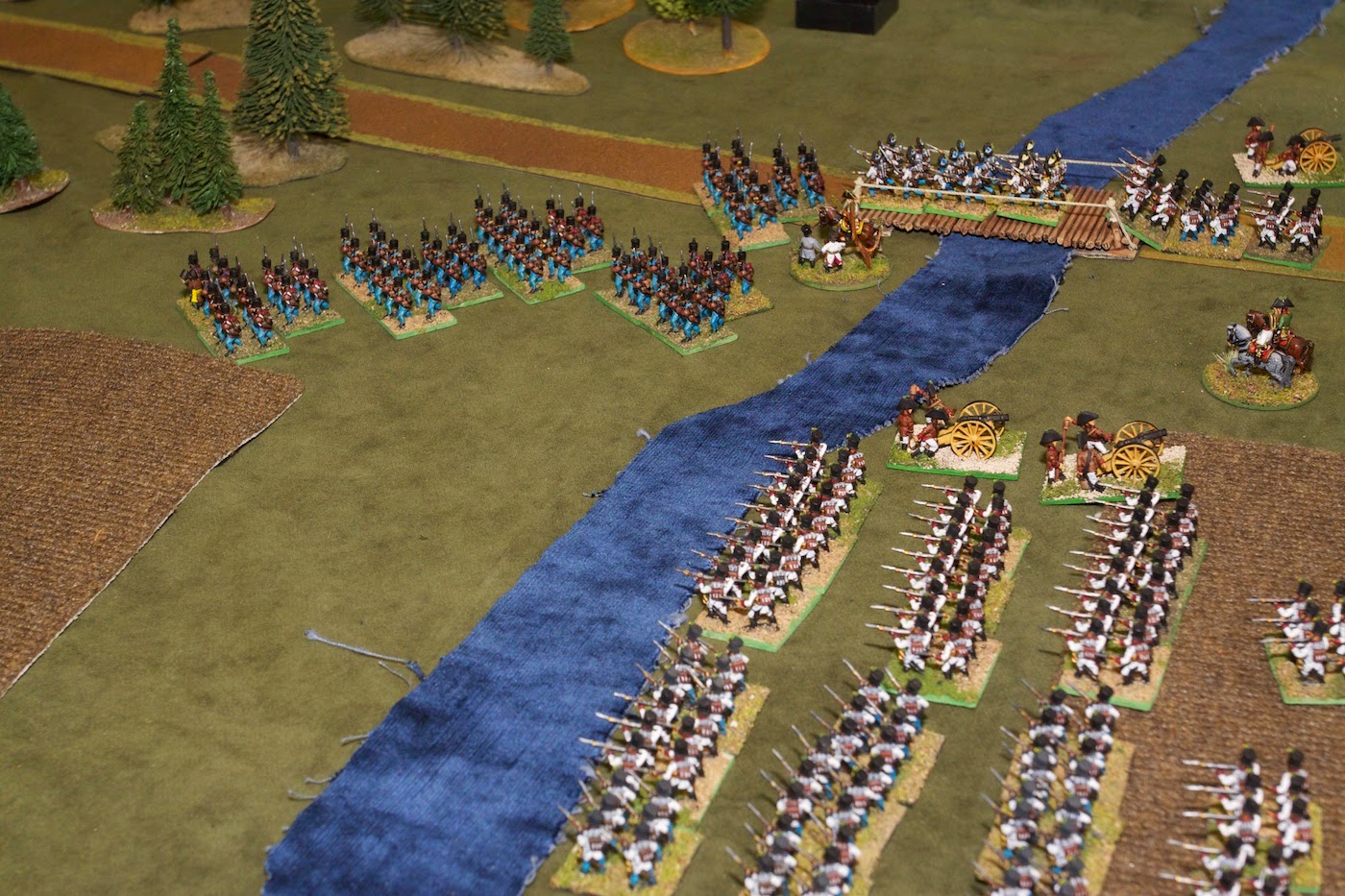 In the center Jägers forced a crossing over the river and deployed protecting the attack columns. Initial assaults weren't immediately successful and a bloody hand-to-hand combat began. On the left flank Frimont's attack wasn't making headway with one brigade being routed almost immediately. 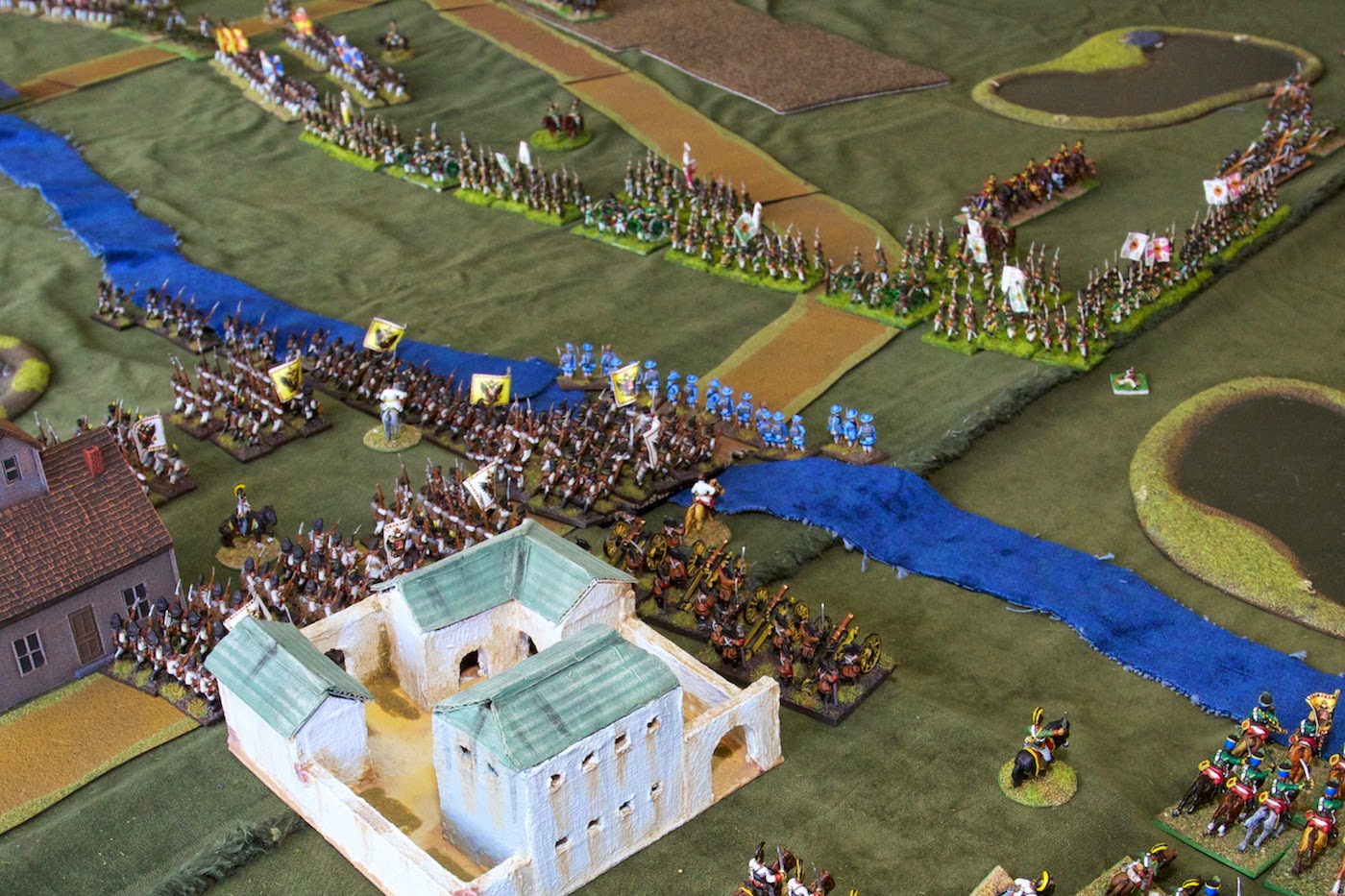 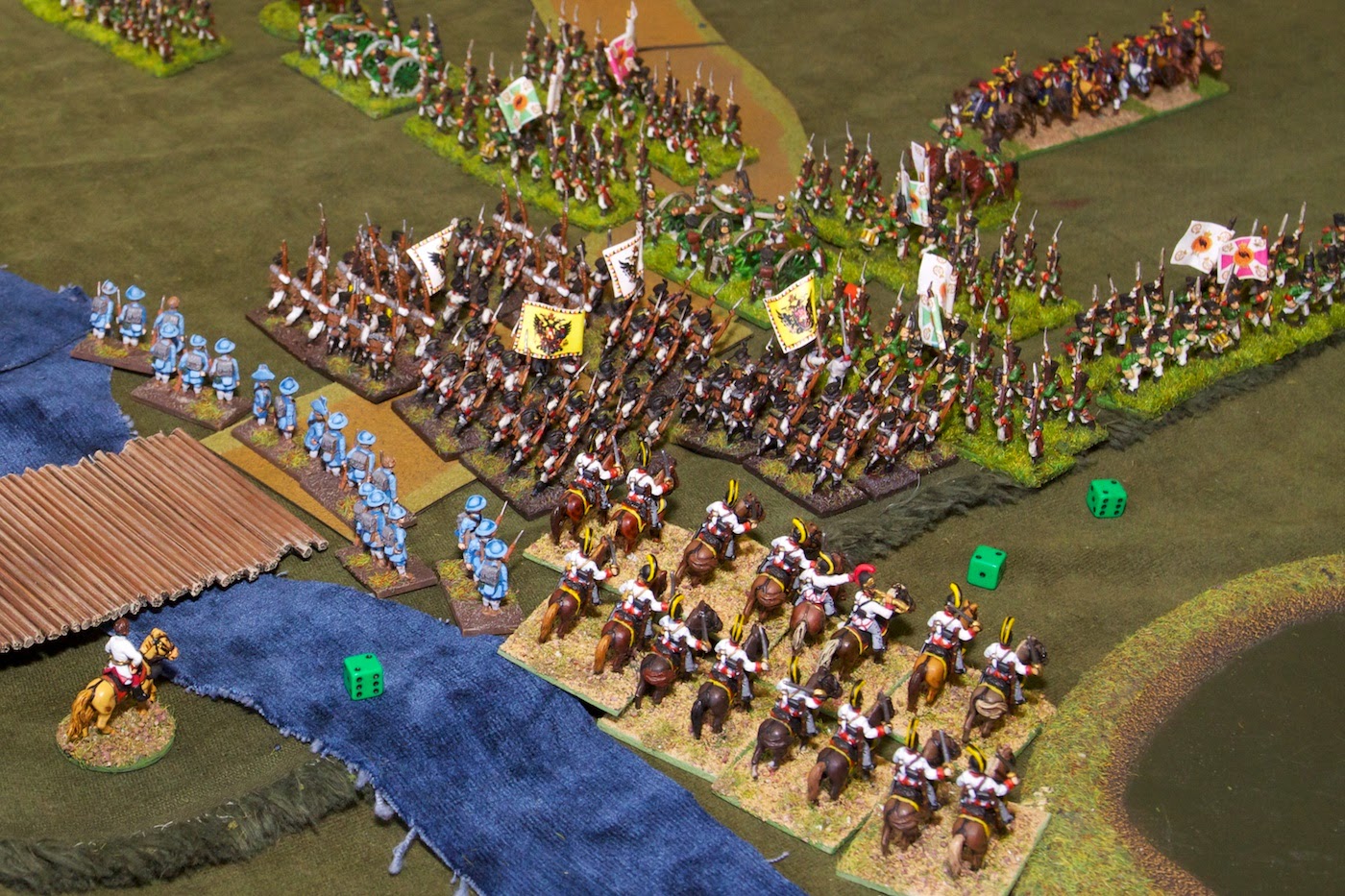 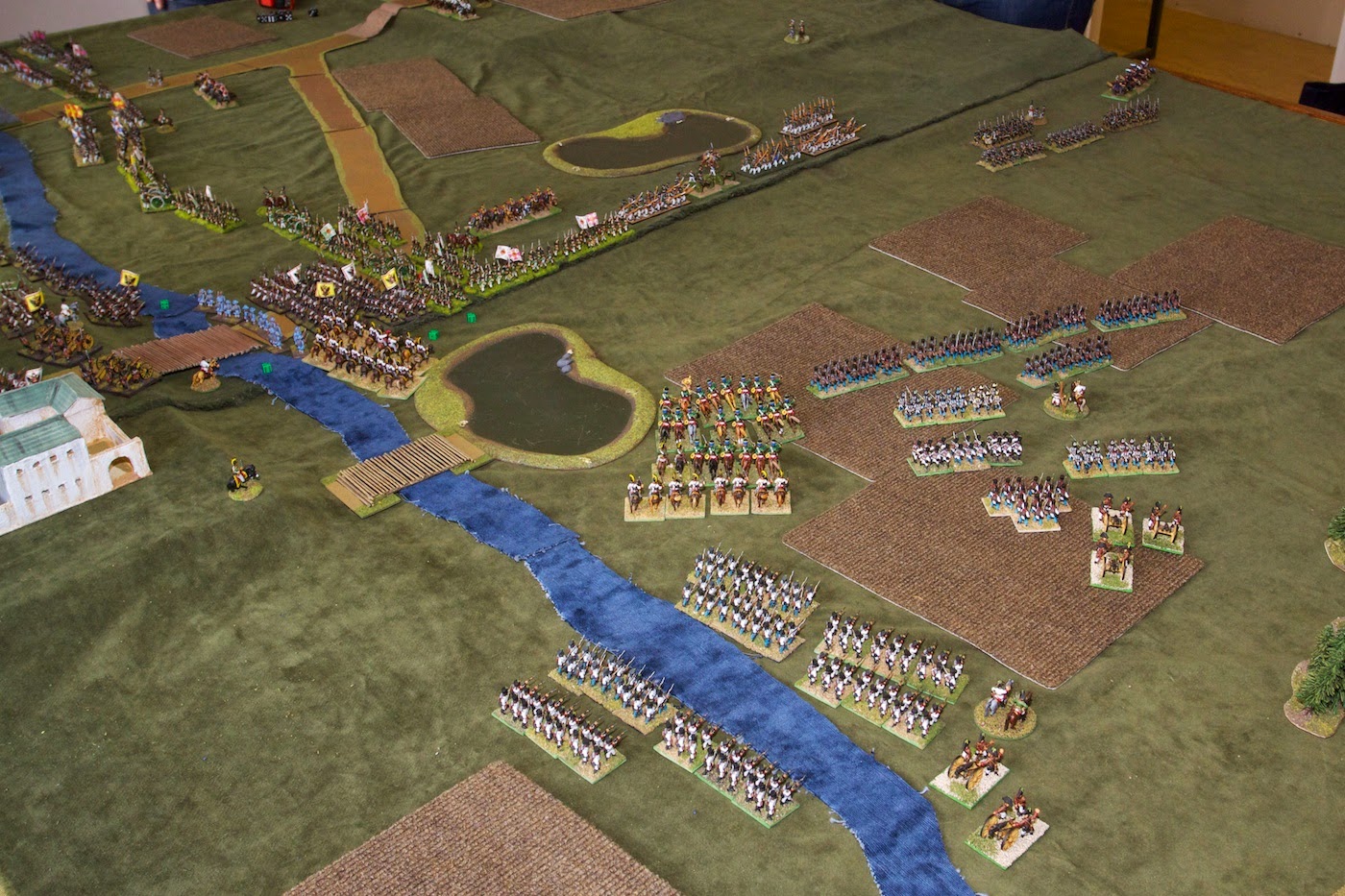 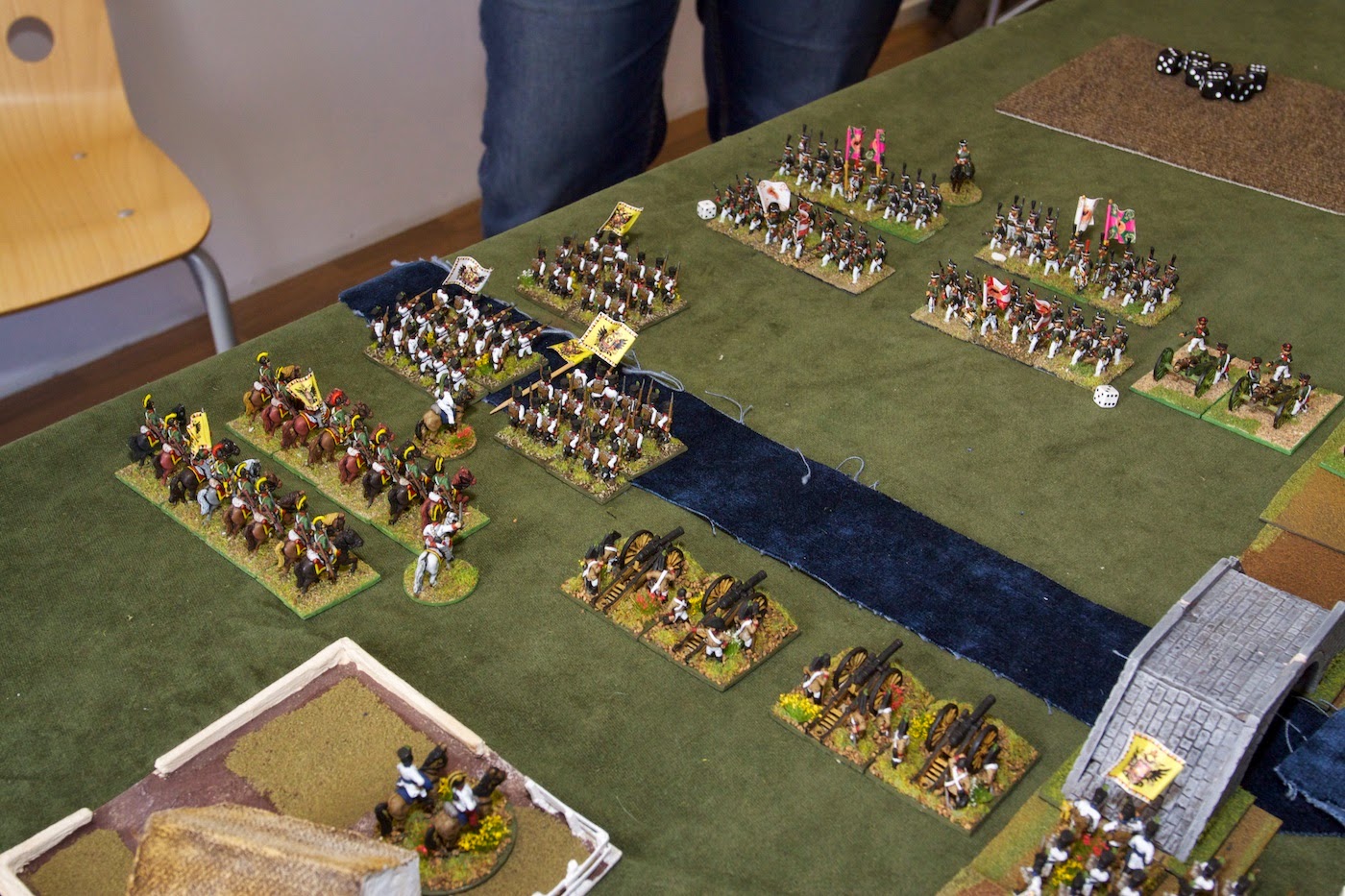 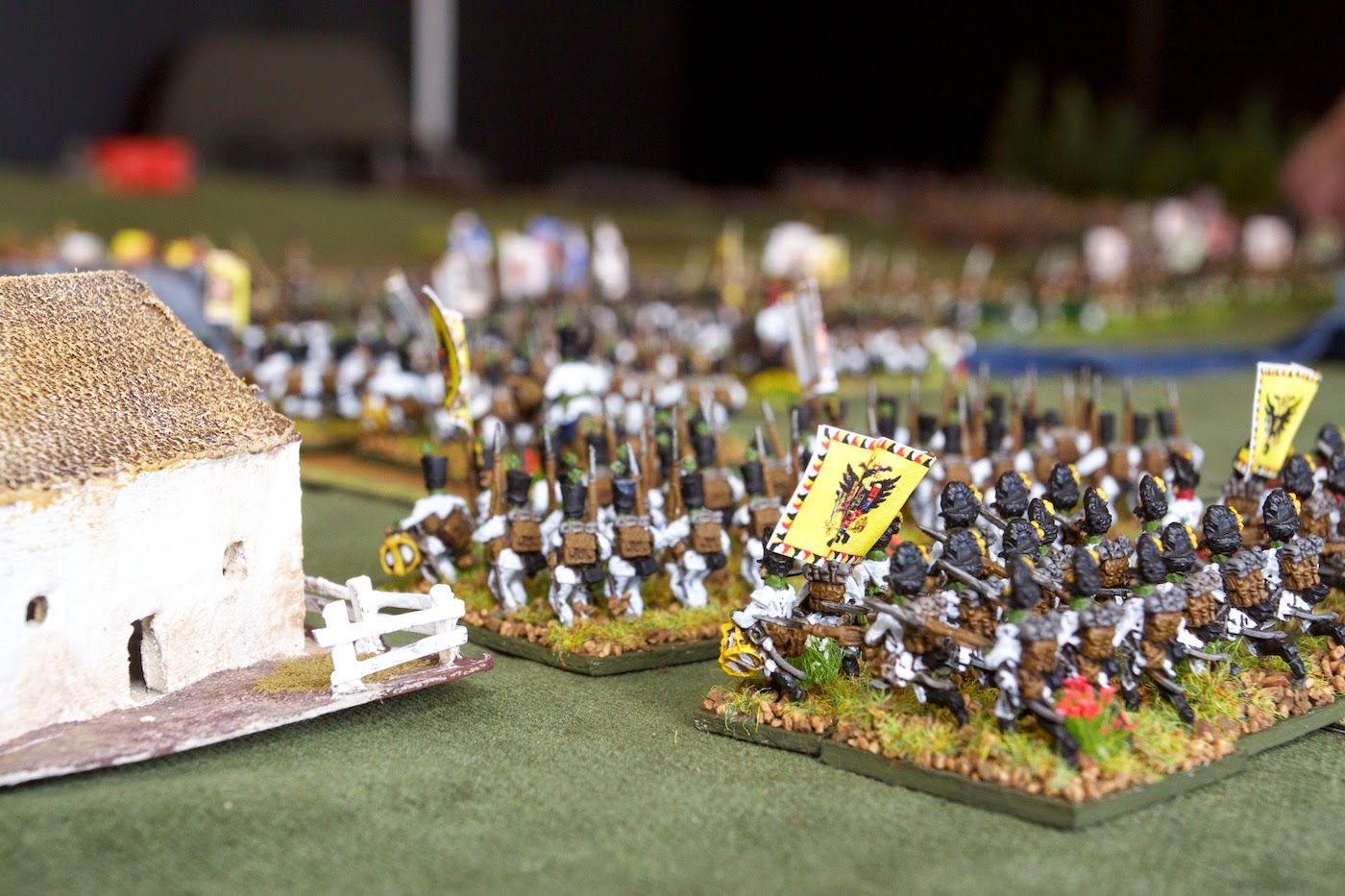 Relentless Austrian attacks were making headway with Nasimov's Russians starting to waver due to heavy casualties from close combat and close range firing from Austrian Jägers and infantry. Their flank was also threatened with Austrian light cavalry making a flanking move ready to run down any retreating Russians. Saxons on the right flank also finally made contact with the Russians and started grinding them down. Saxon and Russian cavalry made each other effectively useless through repeated assaults and counter-assaults. 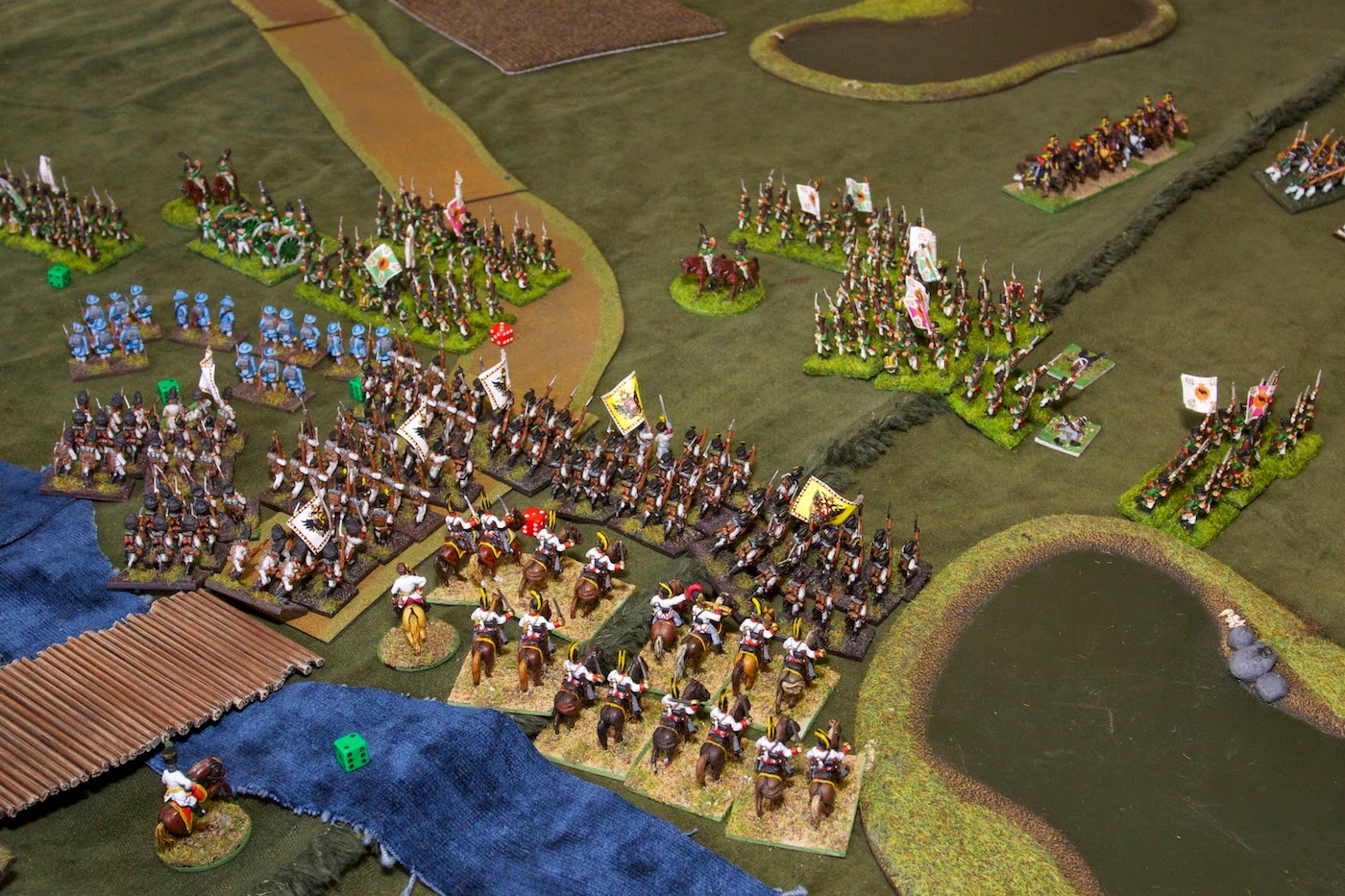 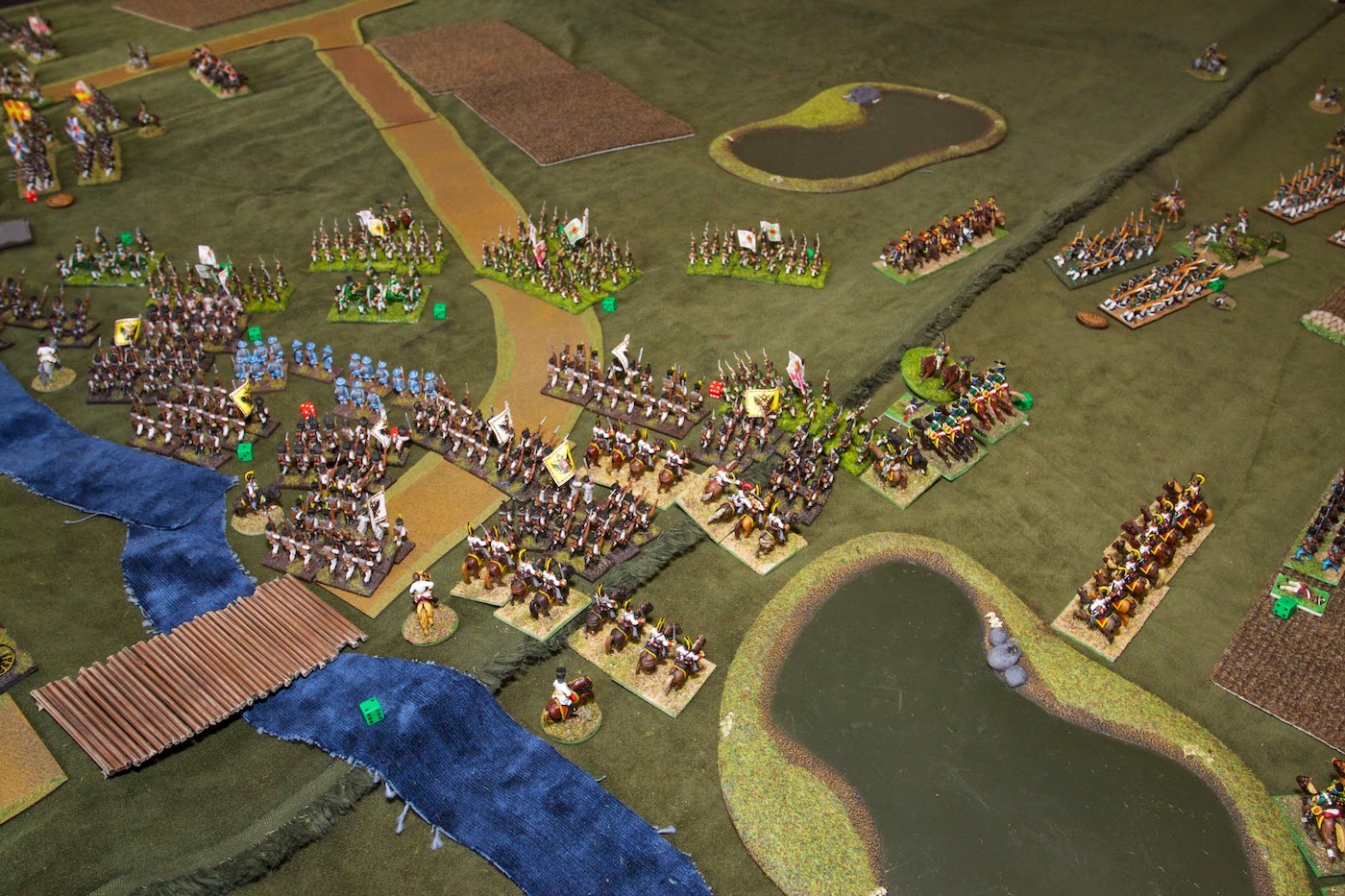 After hours of heavy fighting a breakthrough was finally made in the Austrian center with Nasimov's whole division routing and creating an opening for Austrian cavalry to exploit. However due to communication failures they were not immediately in position to do so and had to maneuver into position. 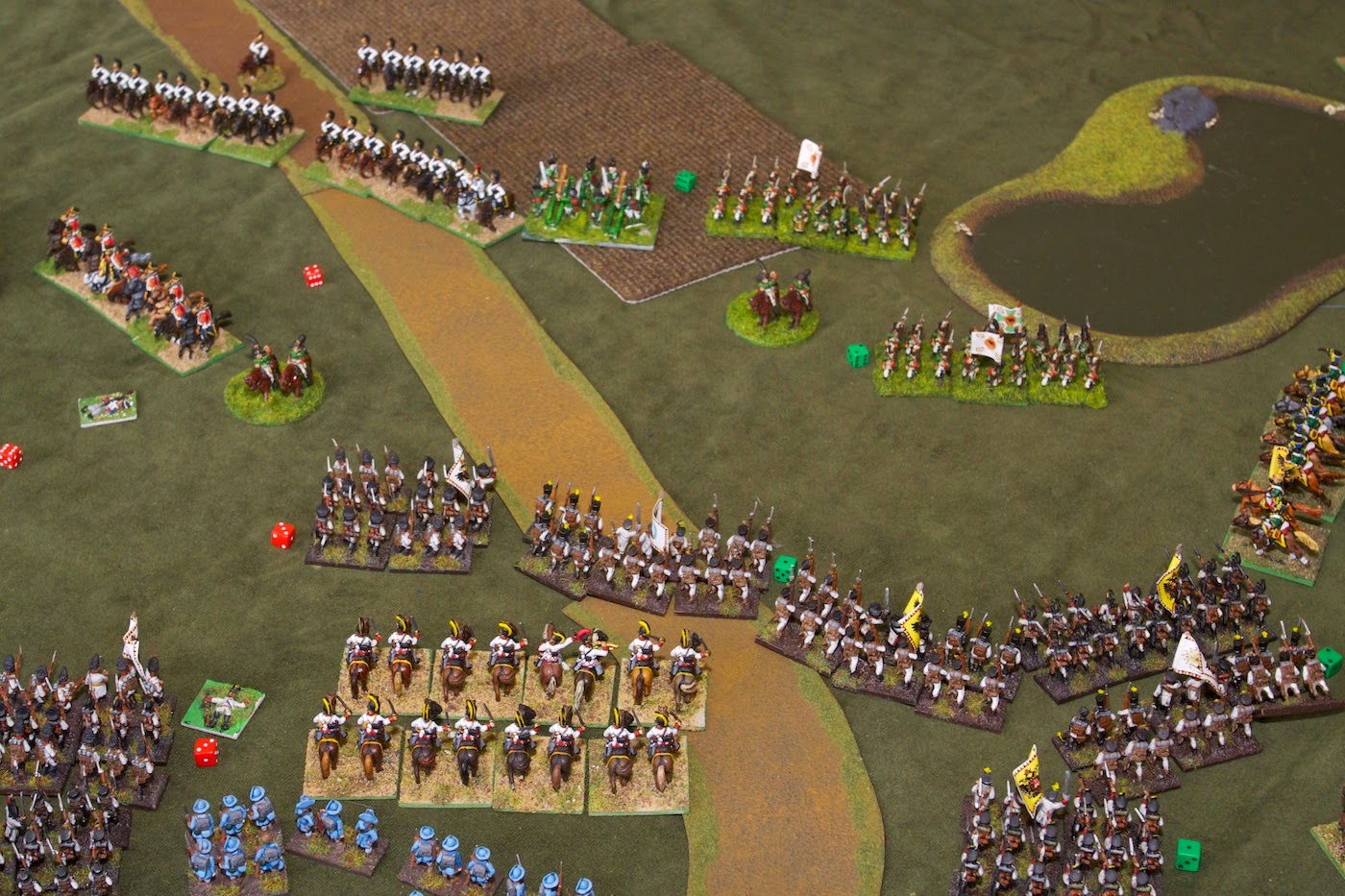 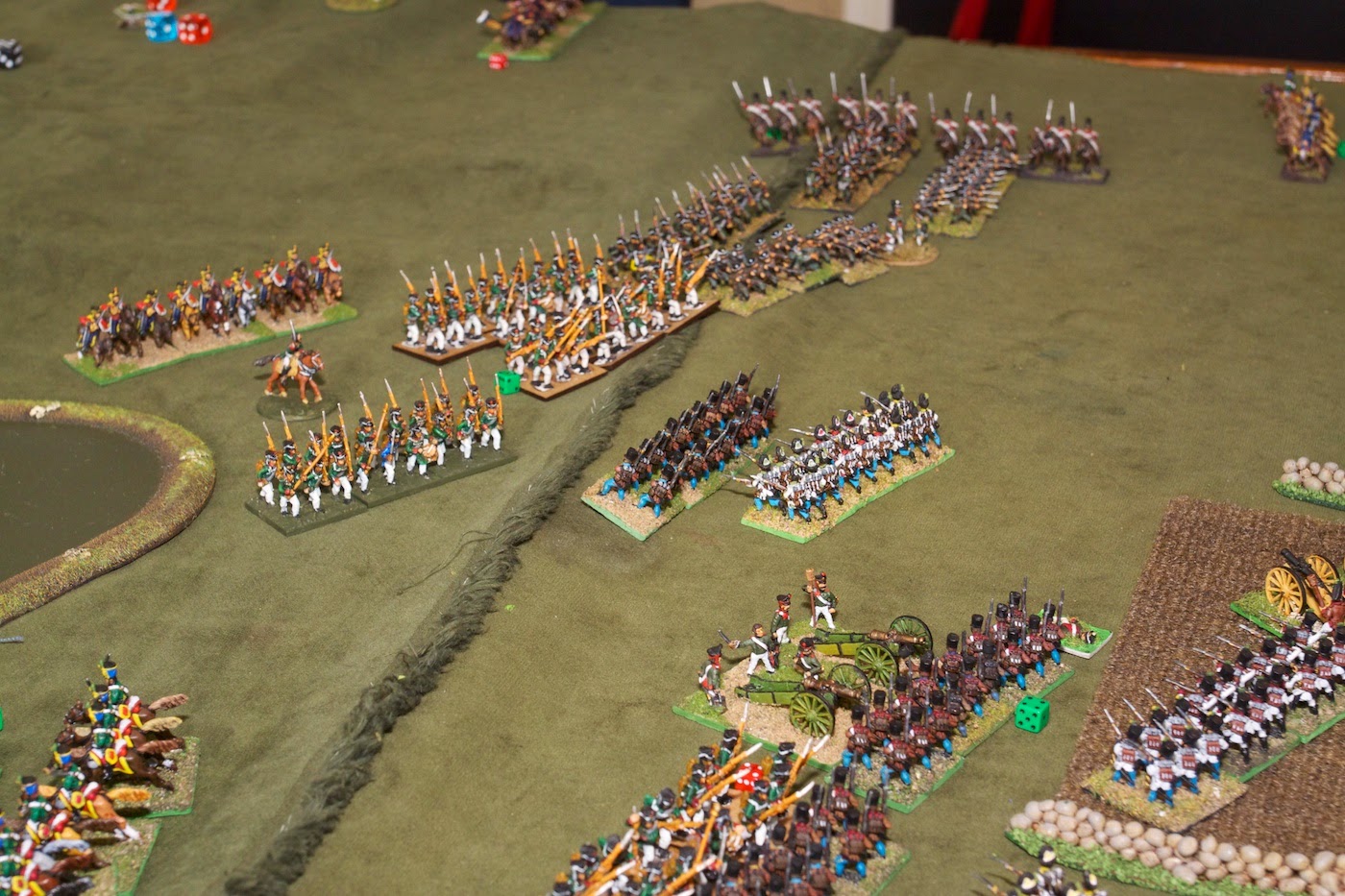 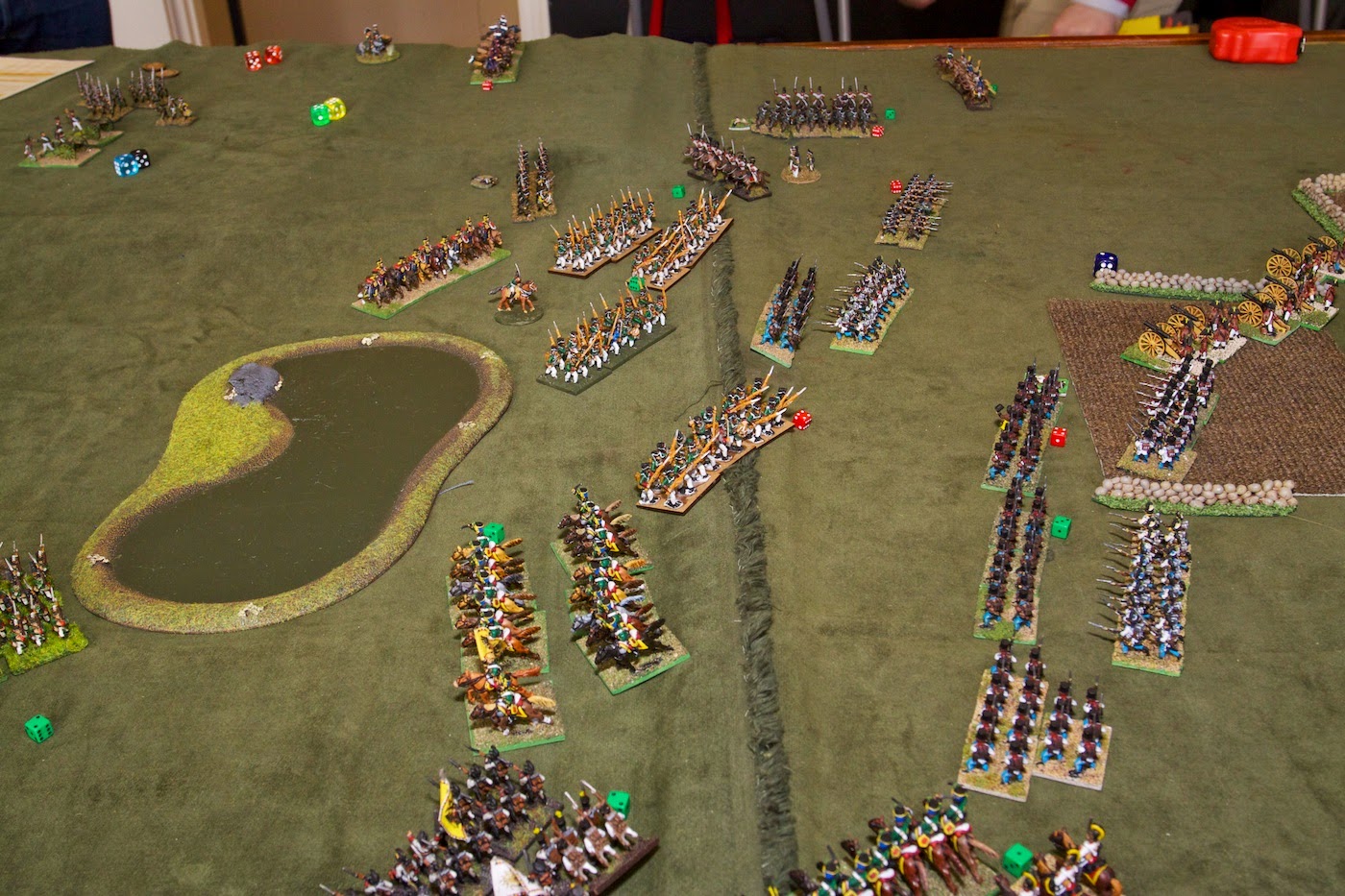 To salvage the situation Russian dragoons were positioned in the middle to hinder the Austrian advance and prevent a complete breakthrough. Heavy fighting ensued between the cavalry of both sides that saw both taking heavy casualties. 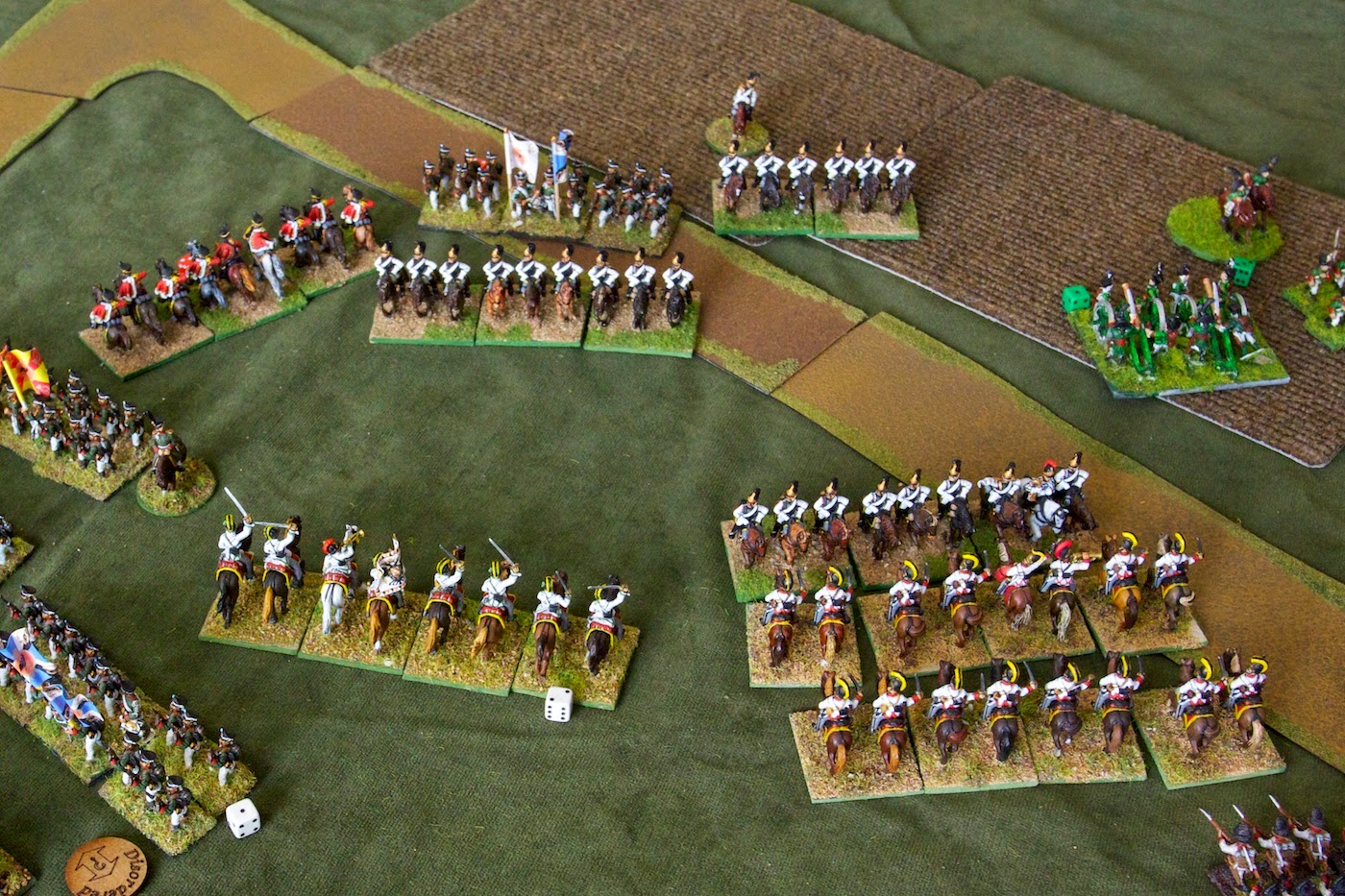 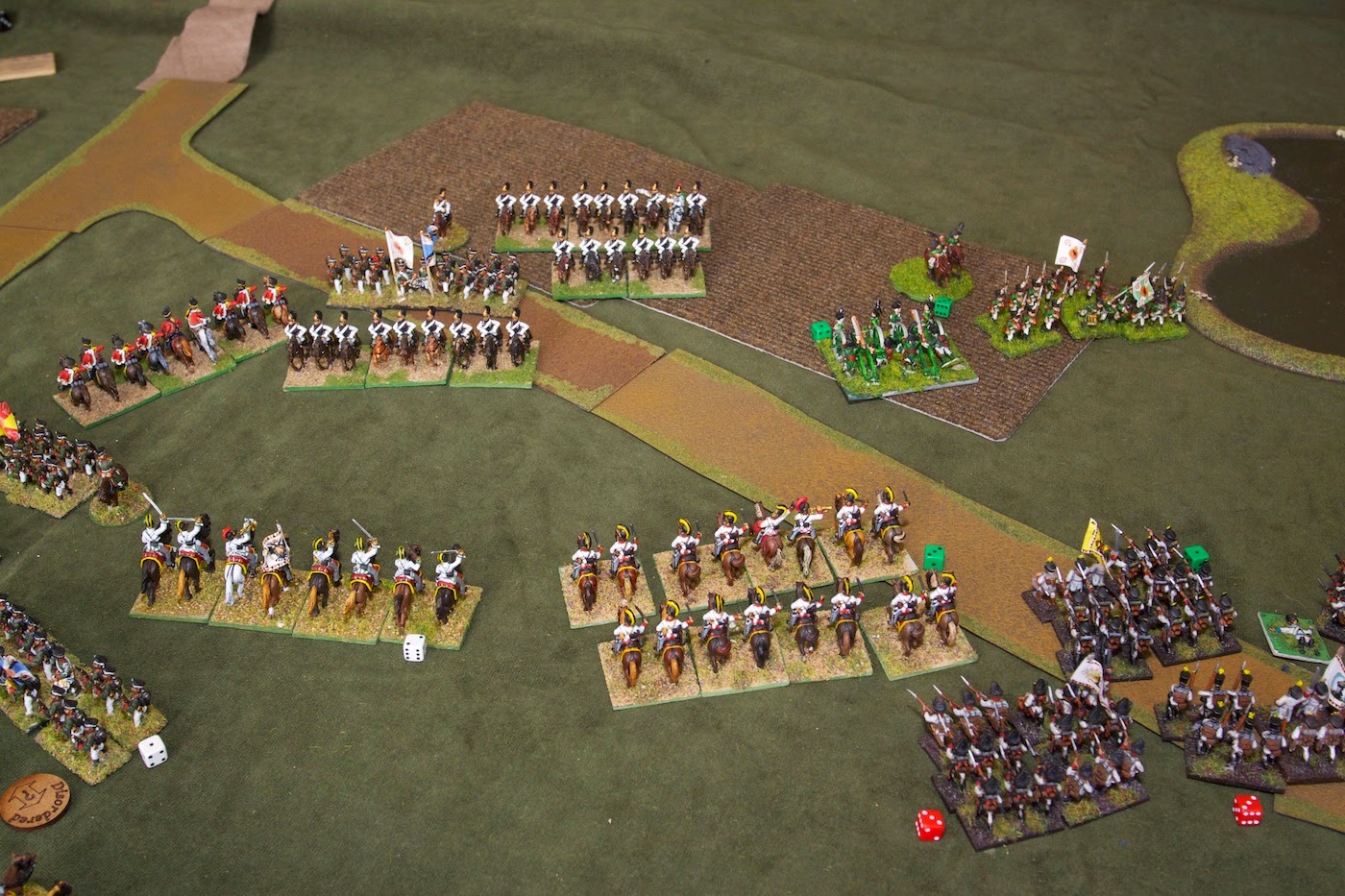 At this point we had gotten through the 10 turn limit and stopped the game. The Russians had managed to slow down Austrian and Saxon advances, but had taken fairly high losses and were under the risk of being encircled. Russian left flank was in dire trouble and their center was destroyed. On the right flank most of their troops were in fairly good condition, but needed retreat to avoid being encircled. Austrian troops on the left flank had taken heavy losses and were unable to continue an assault. In the middle most troops had taken casualties, but were still mostly combat effective. Roughly half of the Austrian cavalry was still completely fresh and ready to start causing havoc in the Russian rear. Finally on the right flank the Saxons started to really make contact and were in position to push through defending Russians and close the pocket before they could retreat. 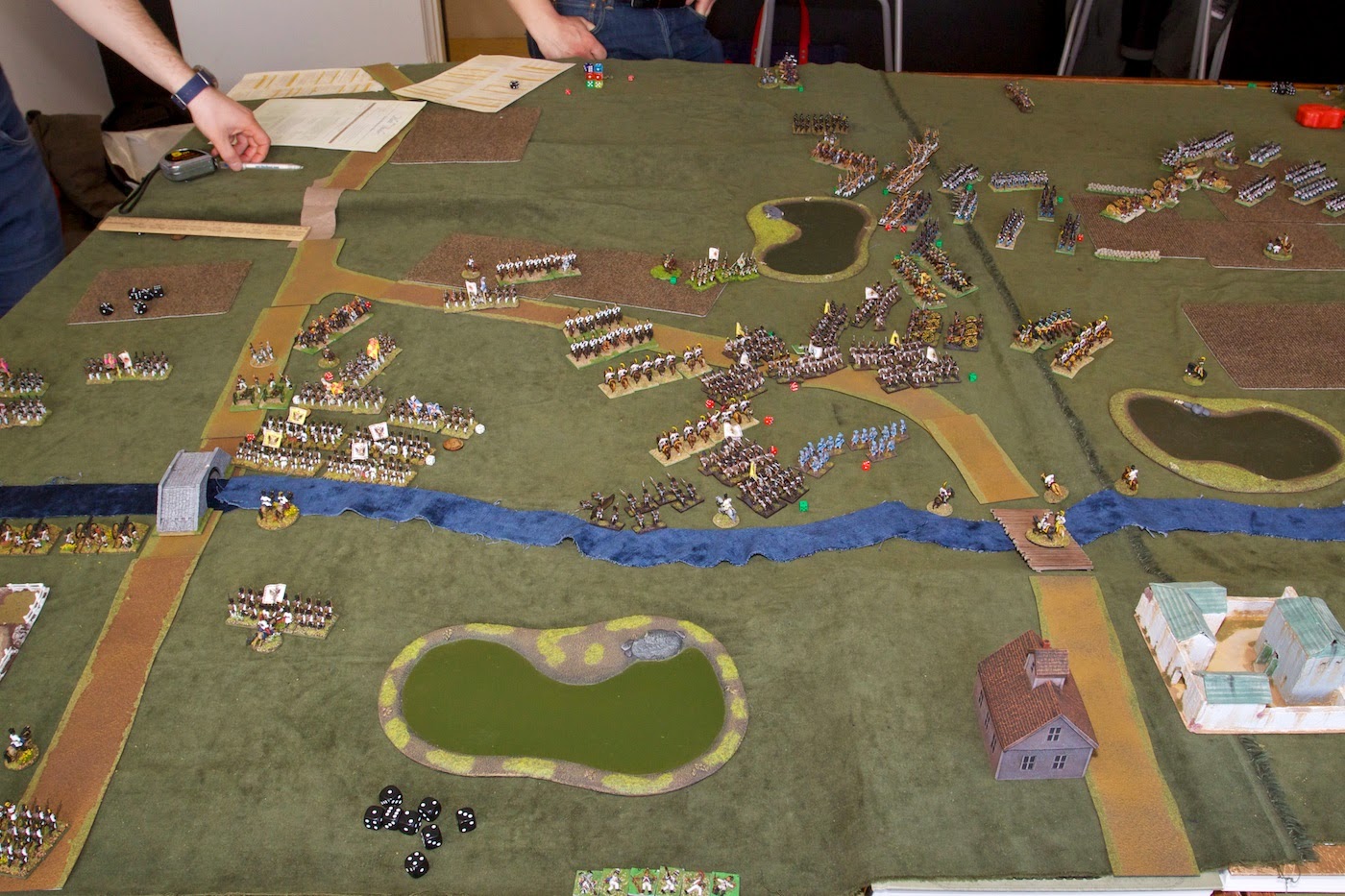 Another fun game, though the deployment of the Saxons meant that they couldn't really get to grips with the Russians before the end of the game. The first shots fired between Russians and Saxons was on round 6 if I remember correctly, so things could have gone very differently had they been in combat earlier like they were historically.

Next up the first battle of Polotsk where my Swiss and Croat troops will make their debut.
Lähettänyt Samuli klo 18.48 5 kommenttia: