With the painting challenge over it's time wrap up with my final entries. In the last few weeks I focused more or less solely on painting some Saxons. Our 1813 campaign is rolling forward and they will all be needed soon. And it doesn't hurt that they yield quite a few points while still being relative fast to paint ;)

All of these units are from the second Saxon Division. I've almost completely finished the first one, it's just missing the Leib Grenadier battalion which will need some green stuff work as their uniform differed slightly from the normal grenadier uniform. And after these I'm only missing 3 more infantry battalions from the second division and then that's completely finished as well! However they might have to wait a bit longer as I'm actually missing some line infantry miniatures and will have to wait for reinforcements. I have enough figures for one more battalion and if I use casualty figures on the bases then for maybe another one after that. I was going to order the missing Hussars and command figures and the final two batteries of artillery so it isn't that big of a deal. 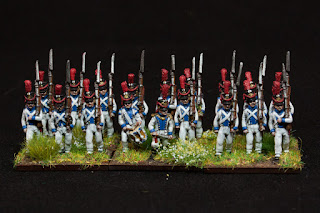 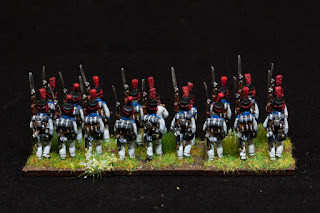 Then we have Regiment Niesemeuschel in their red facings as well as a casualty base. I really need to crank out more casualty bases as well. I've only done this and all the light infantry ones until now so there will be quite a few to paint up! 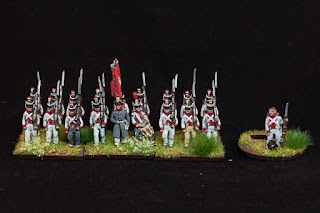 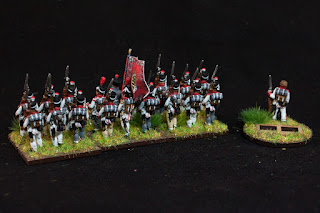 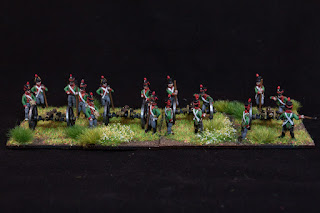 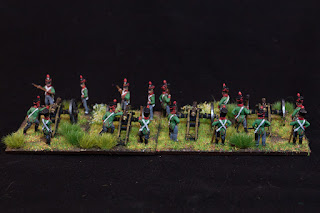 And finally some rats! These were actually painted in late December, but were without bases as they were waiting for the rest of the unit to be painted. I never got around to it during the challenge so in the last evening I figured I'd just make some quick bases for them to get the finished. As paint test minis their main point was to see which would please my eye more, fur or skin shade, on the arms and legs. The clothing is also fairly dull and not the bright bluish green of Clan Mange that I'm going for. But I think I'll reserve that shade for just small details on the basic rats and use it more on characters and units like Stormvermin.

The bases are super simple as there will be far over a 100 of them so I need something that can be done fast and in bulk. The bases were just covered with dark brown Vallejo pumice, an assortment of pigments and then mostly covered with fallen leaves that I made with an assortment of different Green Stuff World leaf cutters. I'll also probably be adding different tufts and maybe some still water on some of the bases, but to be honest I didn't have the time on these guys. The PVA wasn't actually 100% dried when I was taking the images and it was already getting fairly late. 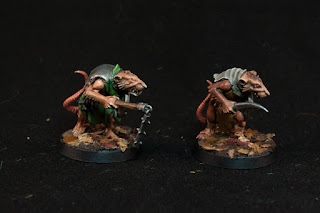 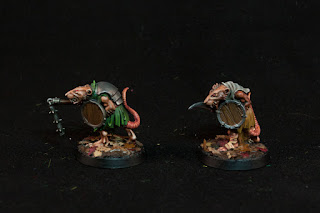