Had another Bolt Action game last week with my Red Devils, this time in a slightly more Italian themed battle with my guys facing a force consisting of Italian Bersaglieri and German Heer troops with some armor support in the form of a Hetzer. We played the first scenario from the rulebook with the attacker attempting to have units on the enemy deployment zone by the end of the game.

We used slightly more terrain than what we'd previously used and it did allow for some more manouvering with safe lanes being plentiful. Deployment started with the defending team placing all of the Italians covering the center of the table and all the German troops offboard ready to move in as reserves wherever I concentrated my forces. 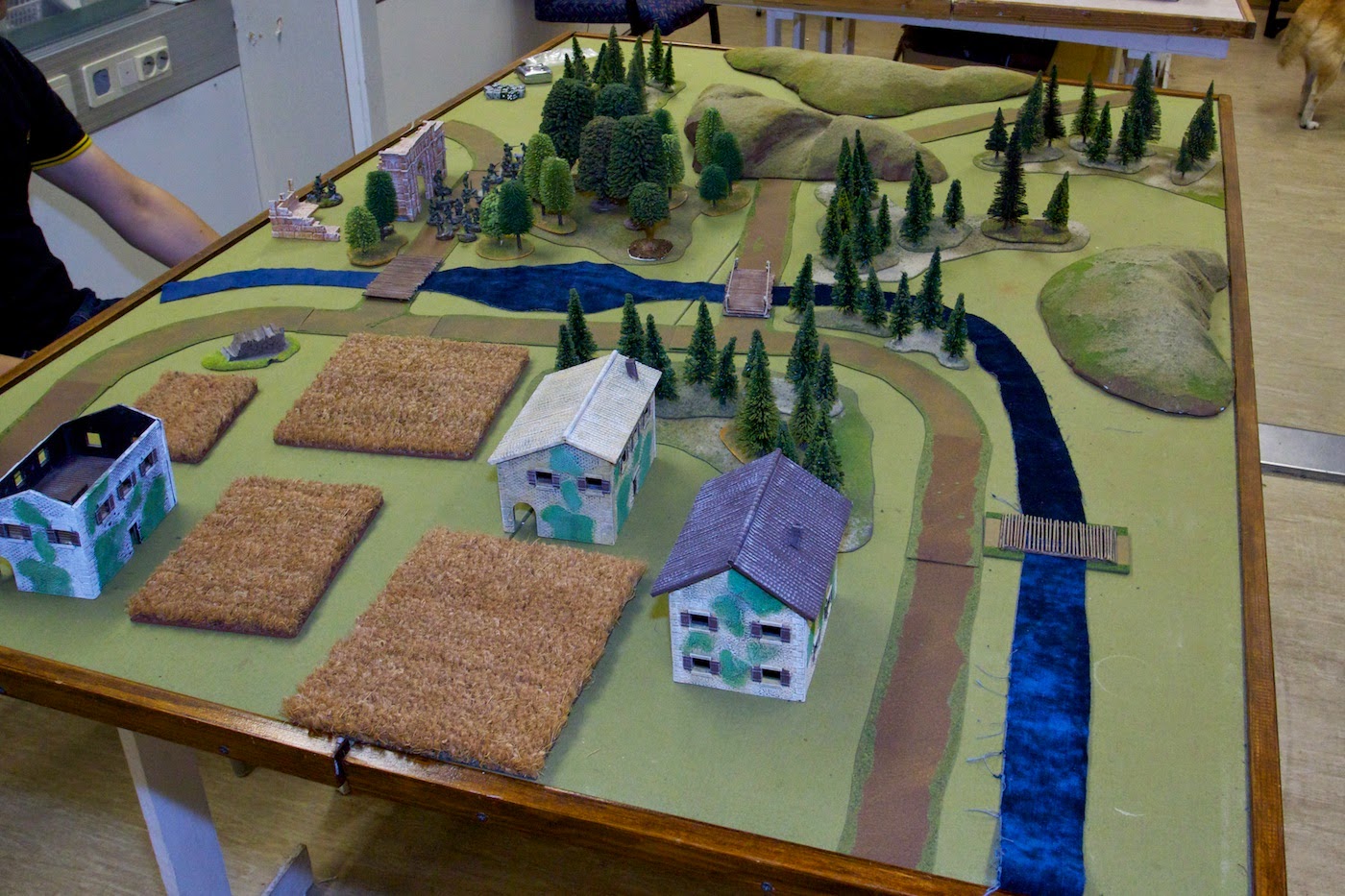 In my first turn I decided to bring in nearly all of my forces on my right flank which had more heavy cover. On my left flank I only left some harassment units in the form of a Recon Jeep, a sniper team and my FOO team. 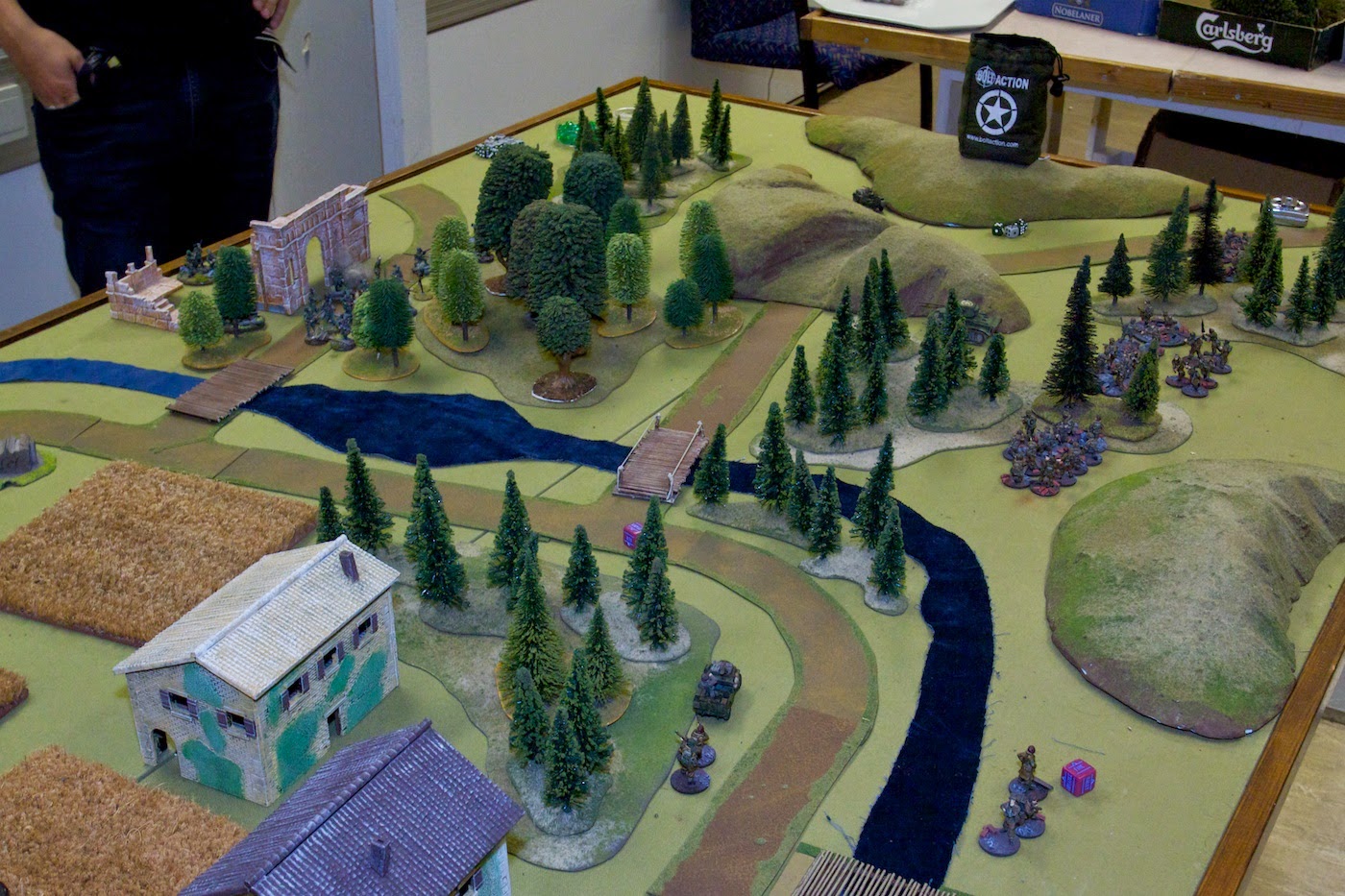 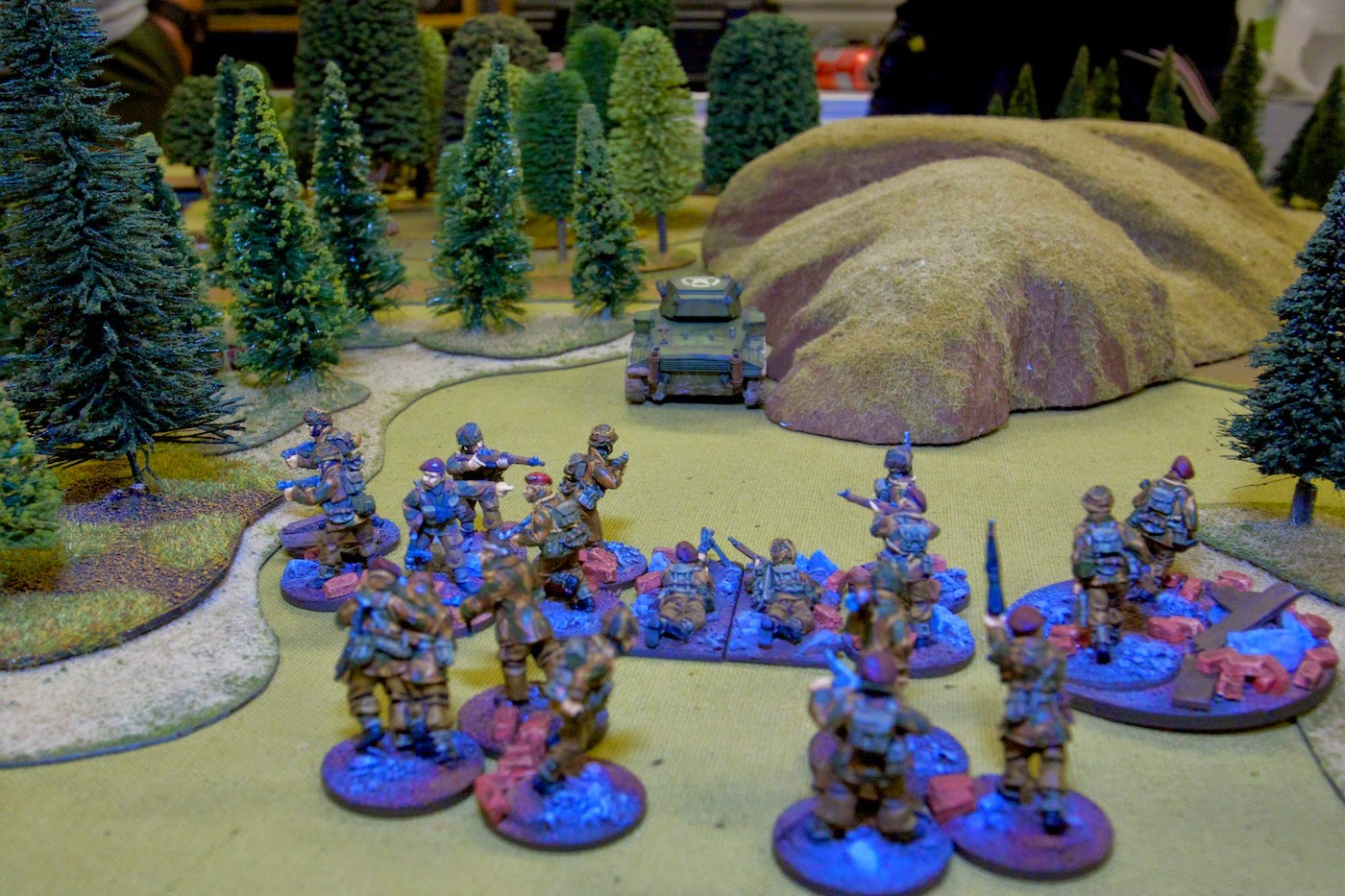 In the beginning of turn three I managed to get a massively lucky artillery barrage straight in the middle of the Italian position covering all the troops and also some of the reinforcing Germans. If that wasn't enough luck I managed to roll 6s on both of the Bersaglieri rifle squads wiping the other out and leaving the other one with only two men left standing. All the other units received a healthy amount of pinning which basically left the left flank without any protection as most of the German units had come to counter my forces on the right flank. 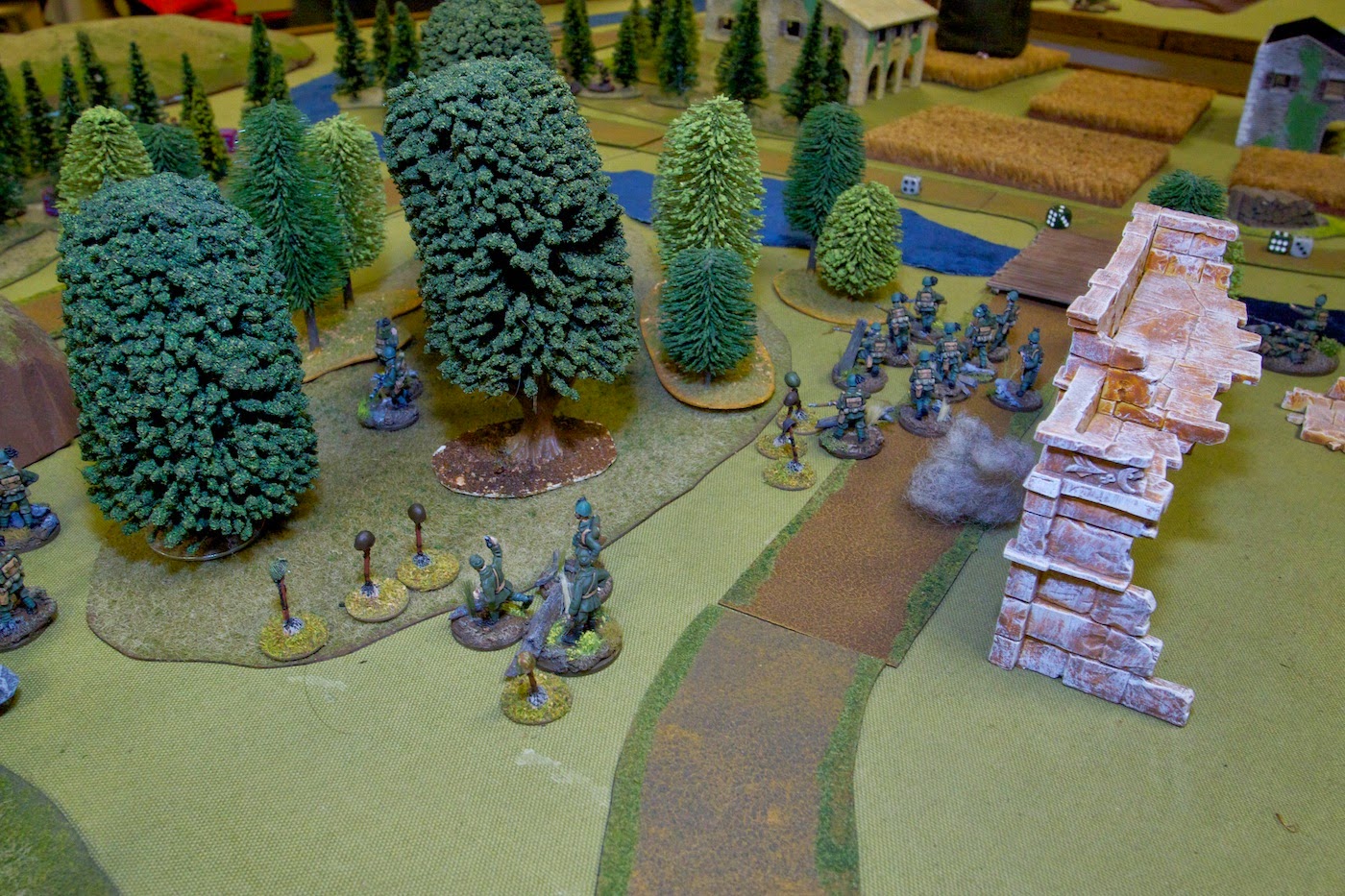 Taking advantage of the situation my recon jeep zipped forward to gun the Bersaglieri MG team down and threaten their flank. 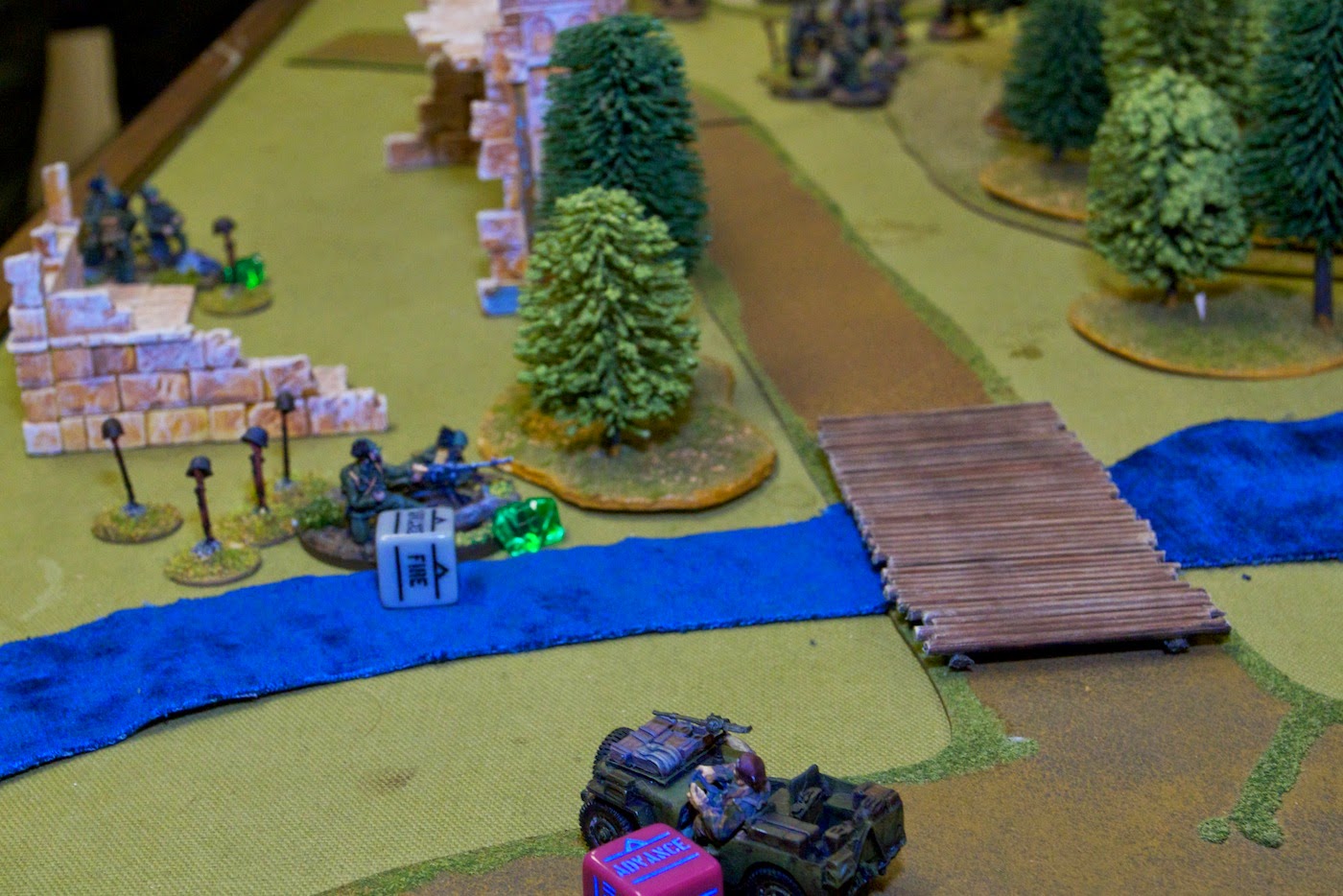 Meanwhile the German Hetzer parked itself in ambush position preventing one of my squads and a jeep from moving up the valley. 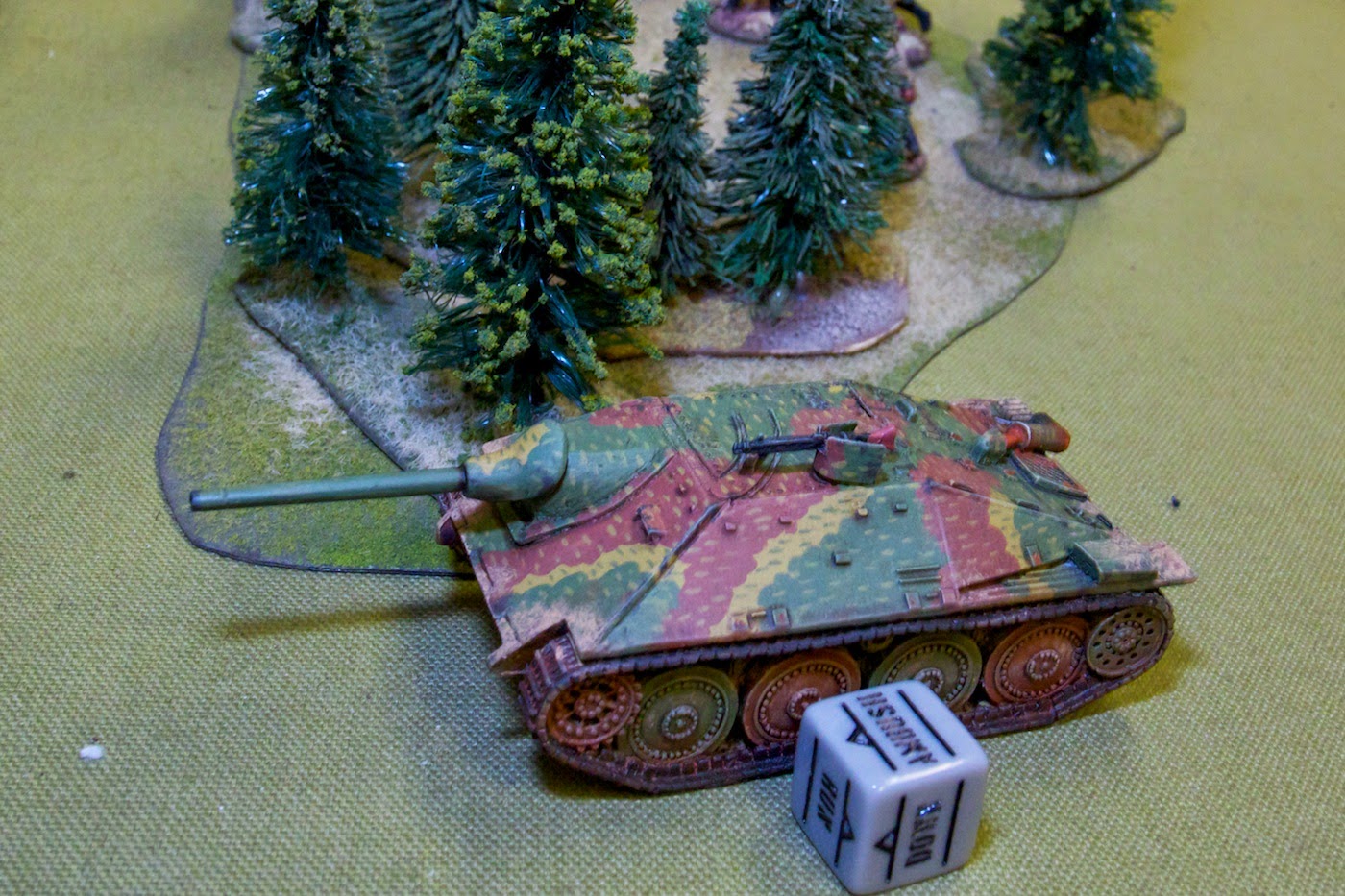 With their other flank completely unprotected I started moving my units through the central woods and my left flank blasting anything that came in the way. At this point it was already pretty obvious that nothing could stop the British tide as I could easily focus all my firepower on one unit at a time obliterating anything in the way. I did loose a flame thrower and a PIAT team to some defensive fire though as I moved them up quite boldly in the face of fire. 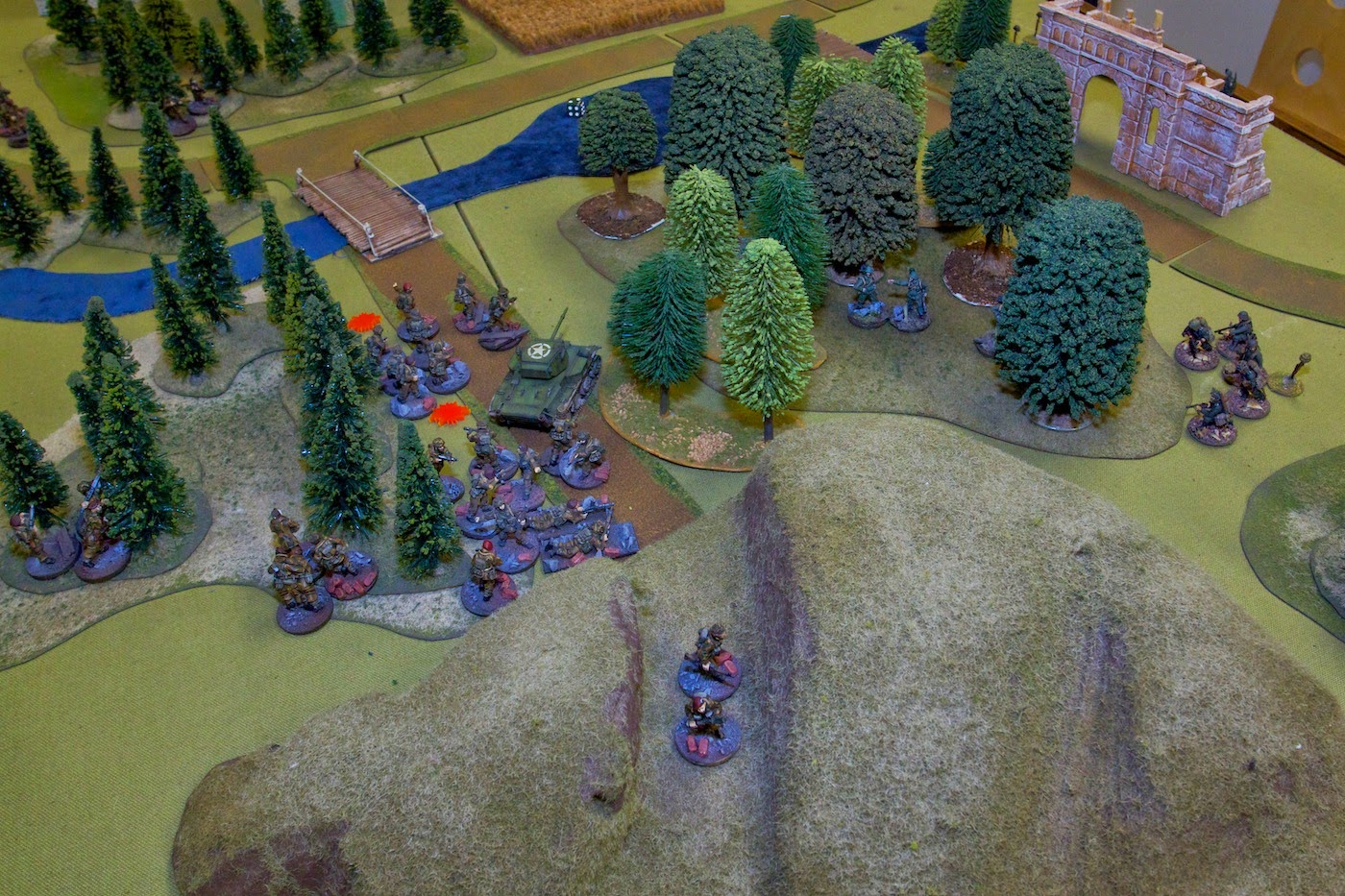 We finished the game on turn three with only a German HQ team and the Hetzer left standing while I had only lost the two small teams and a handful of riflemen that had gotten hit by an Italian mortar round. Thanks to some pretty darn lucky dice rolls the game really went my way from the start. Without the two Bersaglieri rifle teams disappearing after an artillery strike the things could have gone very differently. 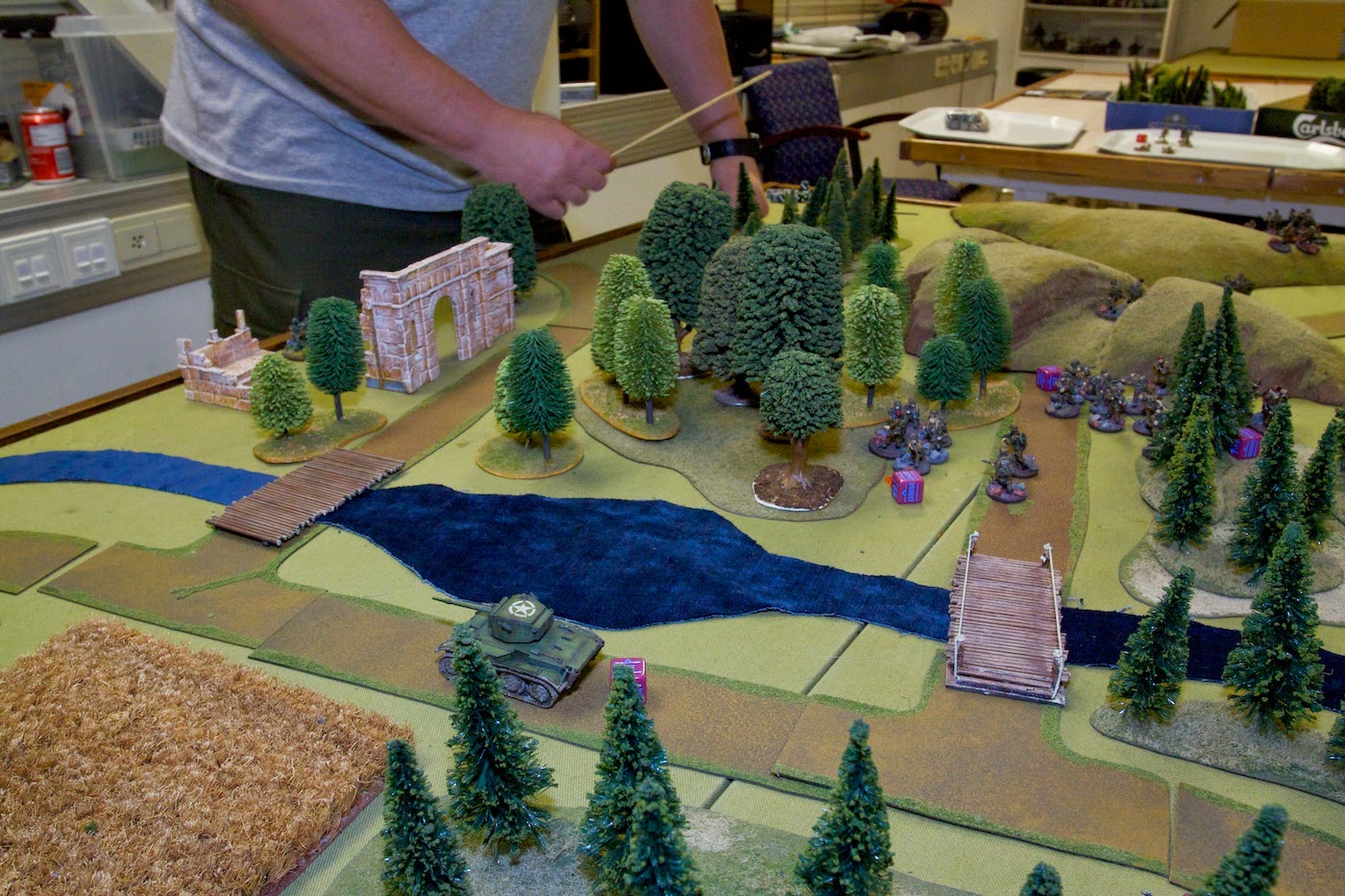 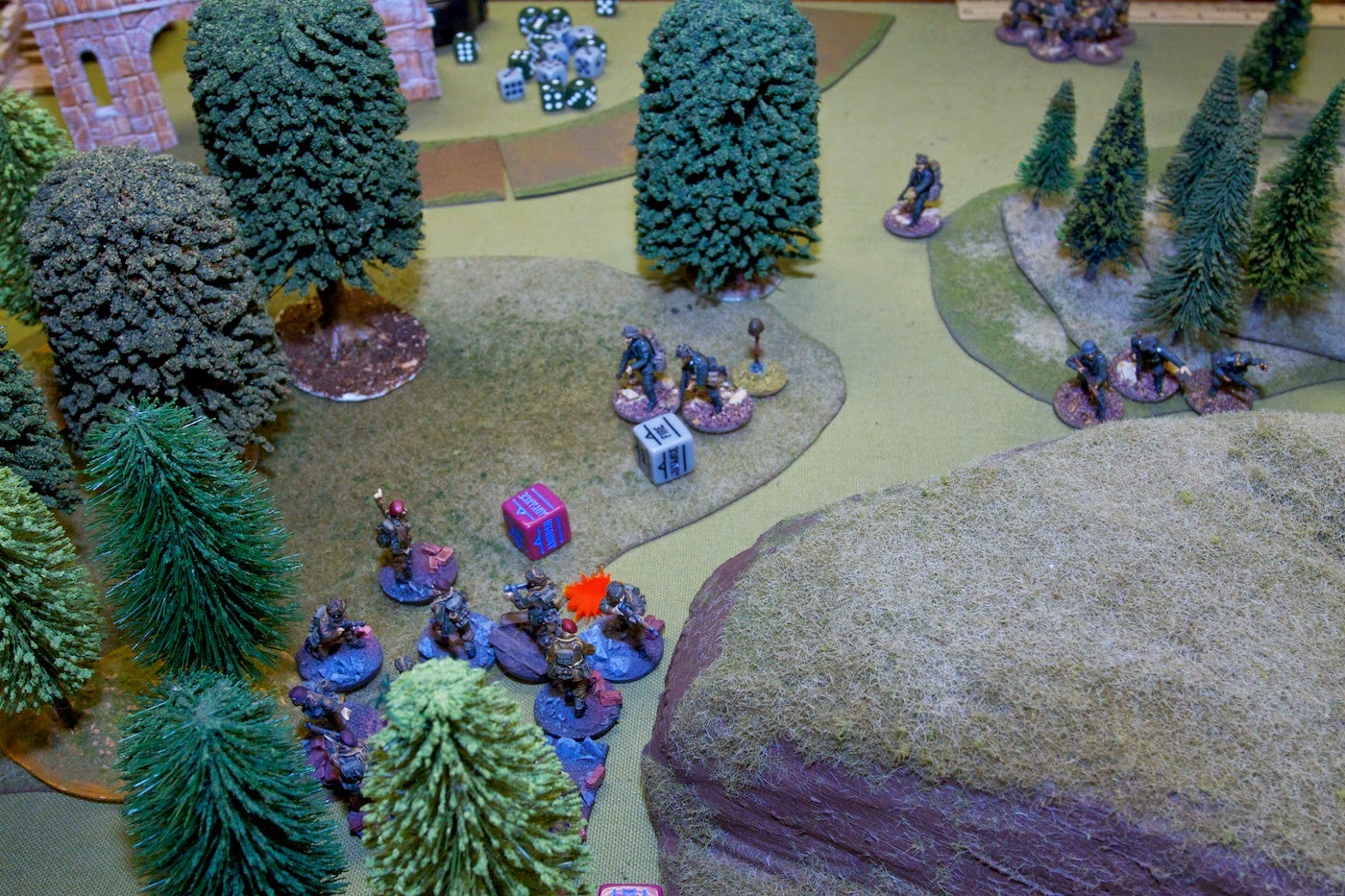 The ever watchful Umpire kept close watch on the conduct of all players from his wooden and canvas throne. 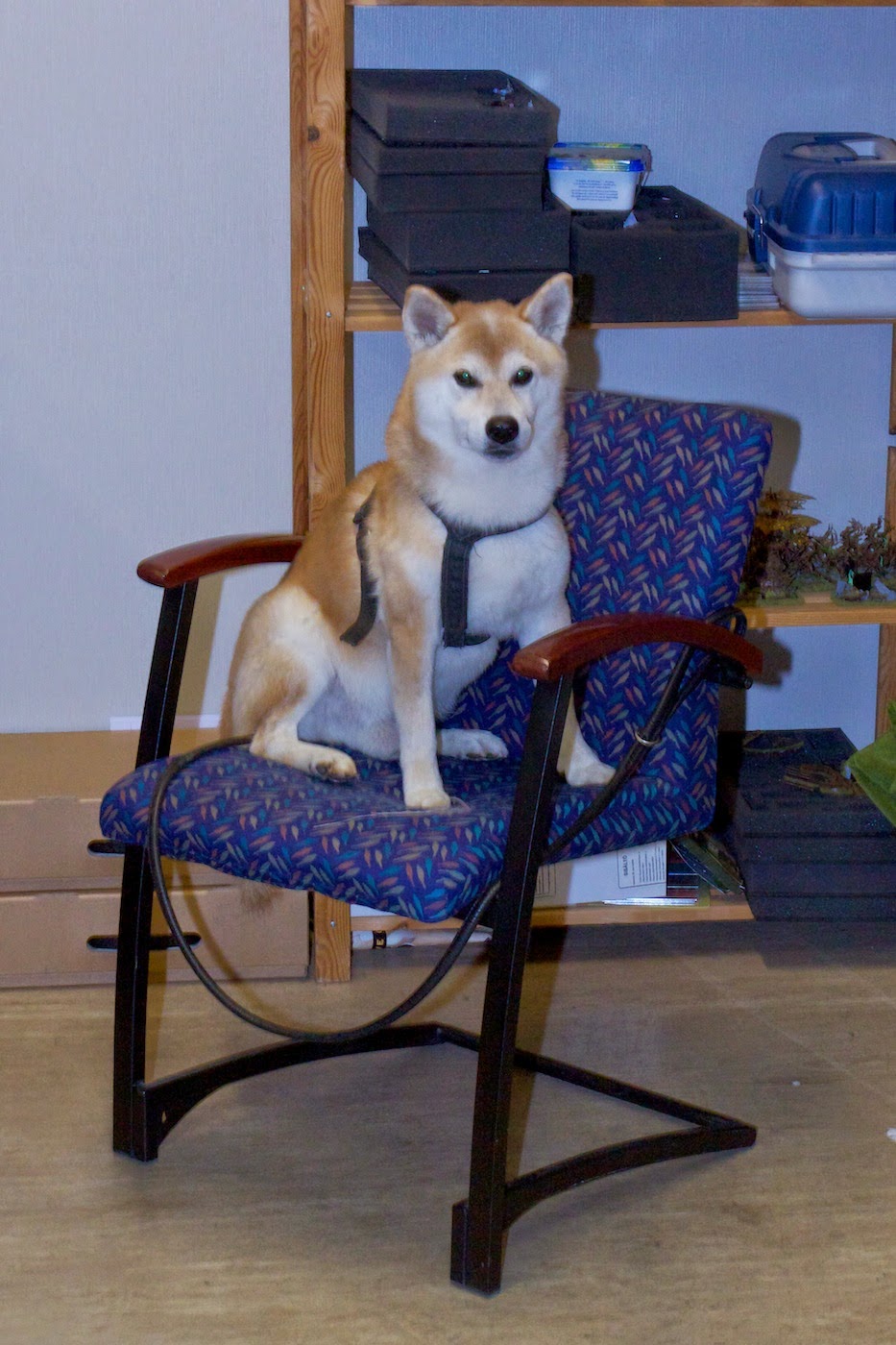