We played the first game of our club Winter War campaign a week ago coinciding with the 75 year anniversary of the start of the Winter War and Soviet Union attempting to invade Finland. The pics took a bit longer to get set up as I've been out of home for most of this week. Still better late than never :)

I functioned as the Umpire running a scenario depicting some of the delaying actions fought by the Finnish covering forces that delayed the Soviet advance so that the majority of the Finnish army could get into position at the Mannerheim line defences.

The scenario saw a Soviet company advance along a road supported by a small T-26 platoon being ambushed by Finnish defenders at a road block. The Soviets were superior in terms of manpower and equipment, but the Finns were far better positioned and just had to delay the Soviets for a long enough time.

The set-up was actually quite close to the Jungle Ambush scenario on Warlord Games website with the addition of 2 minefields for the Finns. Soviet forces included 2 command teams, medic, Comissar team, 6 full strength Infantry squads, a MMG team and 3 T-26's with one of them being the twin machinegun A variant. The Soviets were also able to bring back destroyed infantry squads as Reserves on the next turn after their destruction. The Finns on the other hand had 4 eight man squads supported by a light antitank gun, a MMG and a sniper team as well as their command and medic.

The game started with the Soviet Vanguard of 2 tanks, 2 infantry squads and the company command deploying on the road with the Finnish heavy weaponry at the crossroads on the end of the table and the rest of the forces laying in ambush surrounding the road.  All forested area was regarded as Rough Ground. The Finnish Jägers could deploy 4 units in the woods using markers that could be revealed when the Ambush was sprung or when the enemy got within 8". 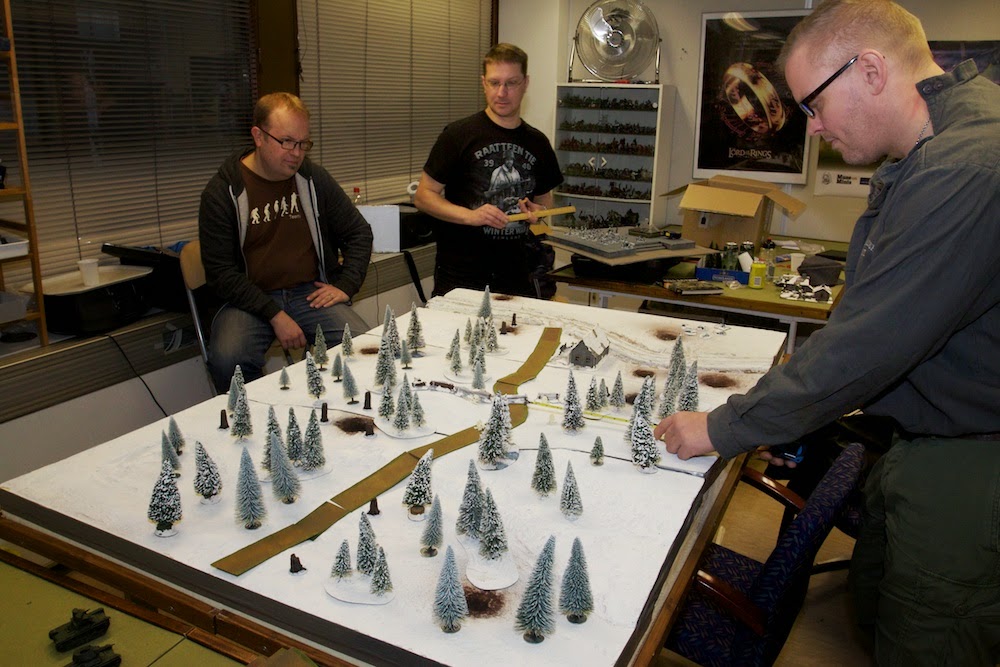 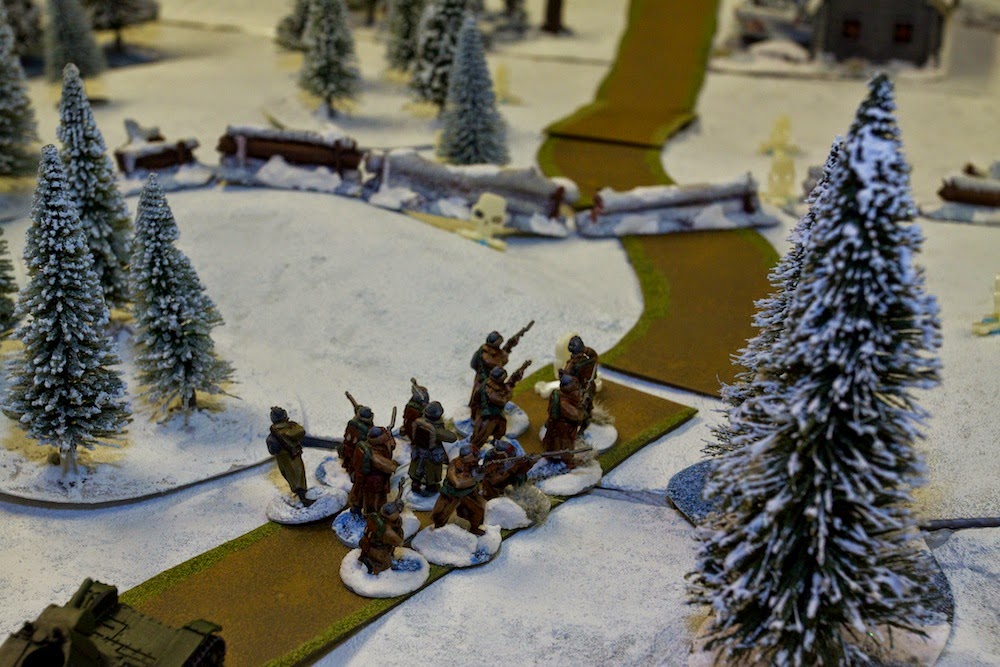 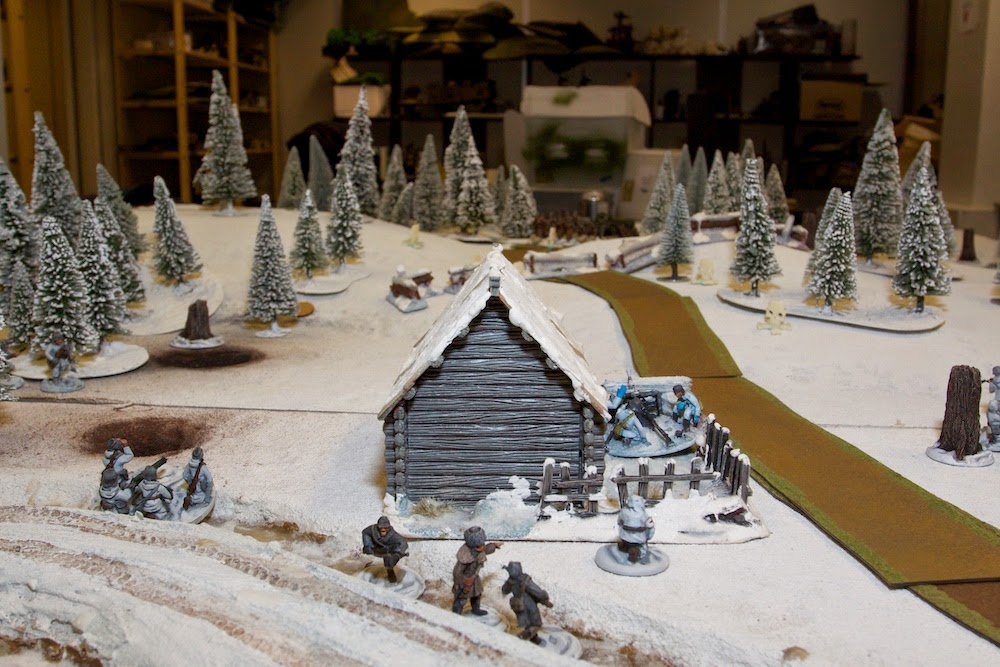 The first volleys of the Finnish ambush were deadly with many Soviets losing their lives immediately. With mounting casualties the T-26's started moving up to fire at the offending Finns who didn't understand that they were just bringing them freedom from capitalistic oppression. 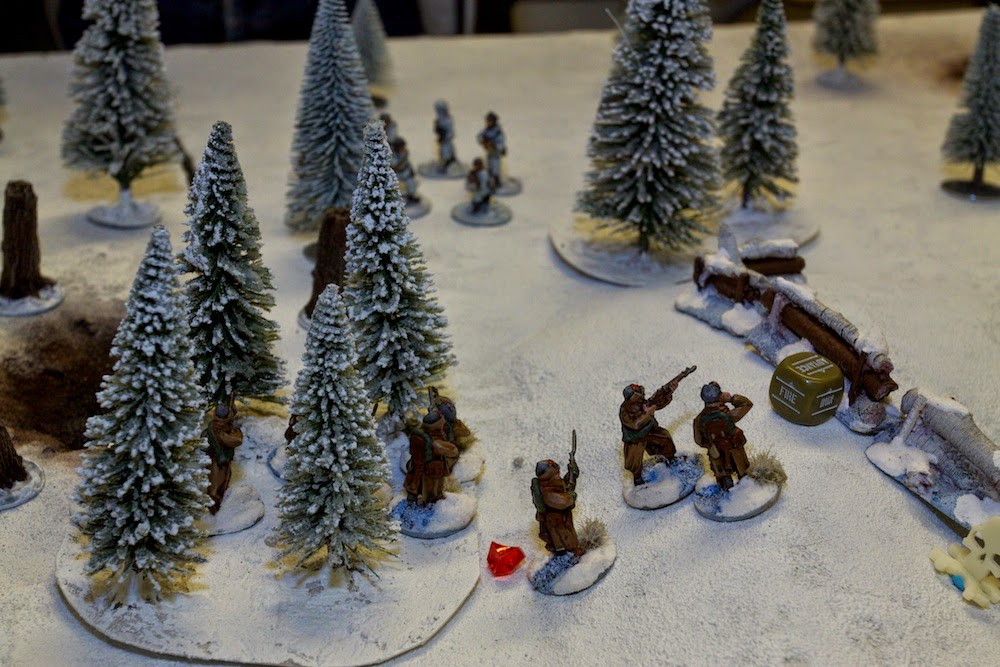 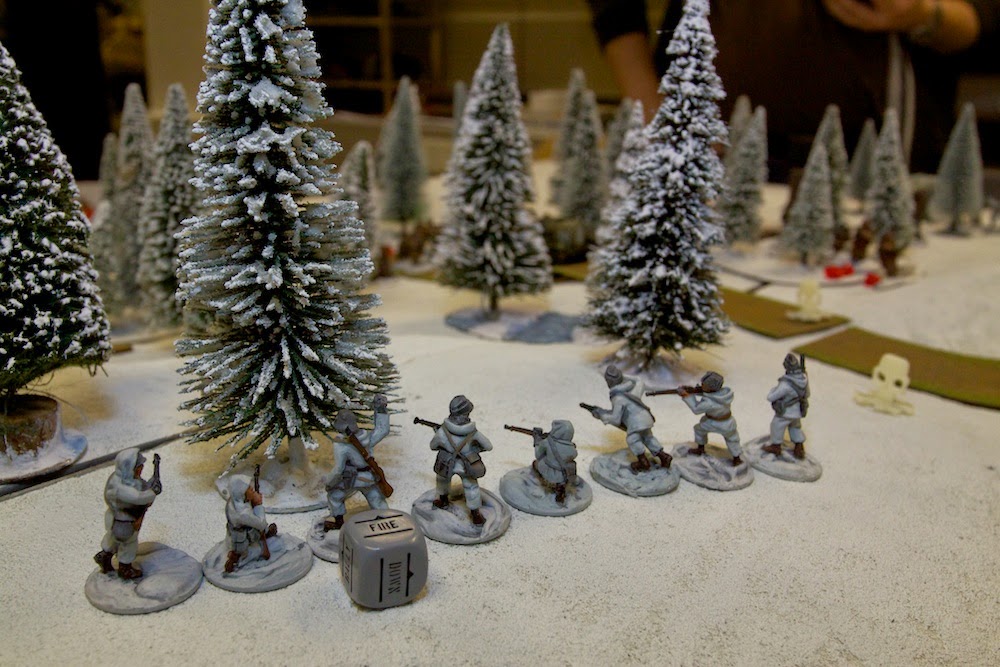 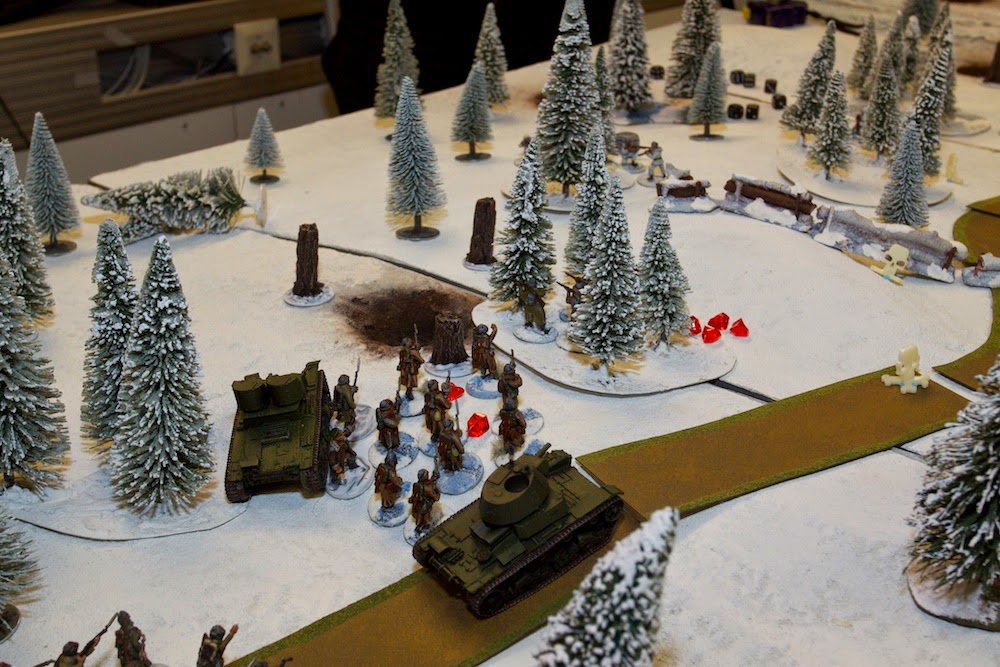 A furious shooting match ensued with the Soviets trying to oust the Finns by shooting. This proved futile with 3 squads being wiped out in quick succession and no progress being made in clearing the minefield and roadblock. 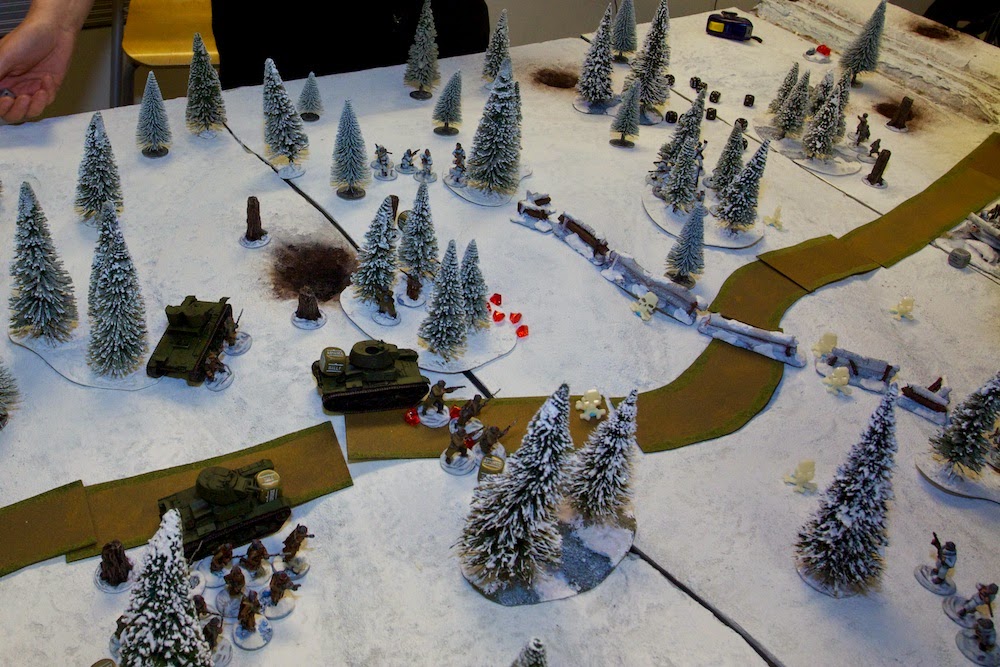 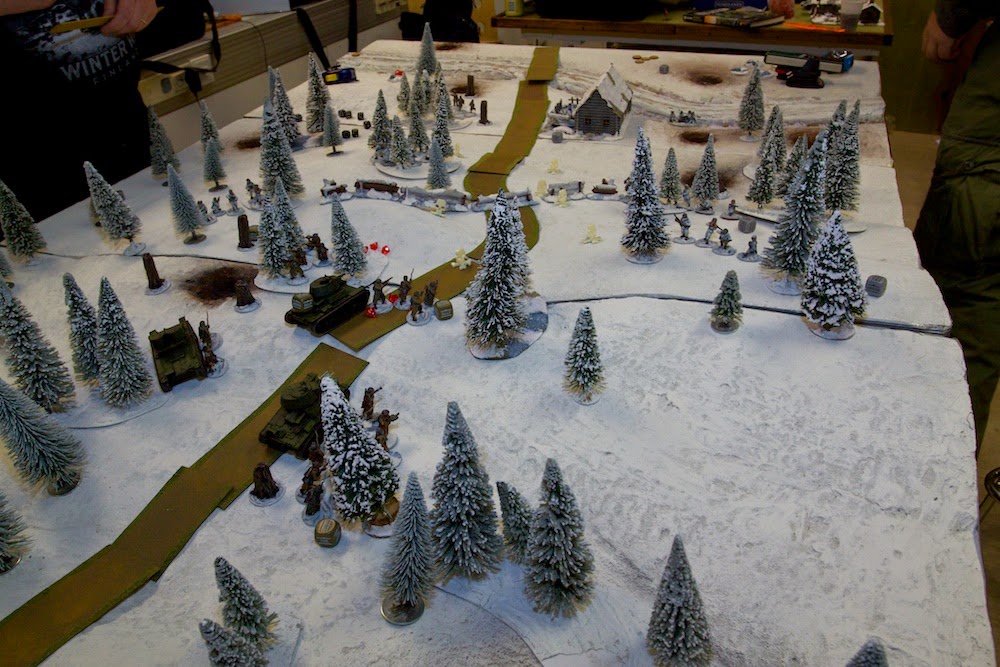 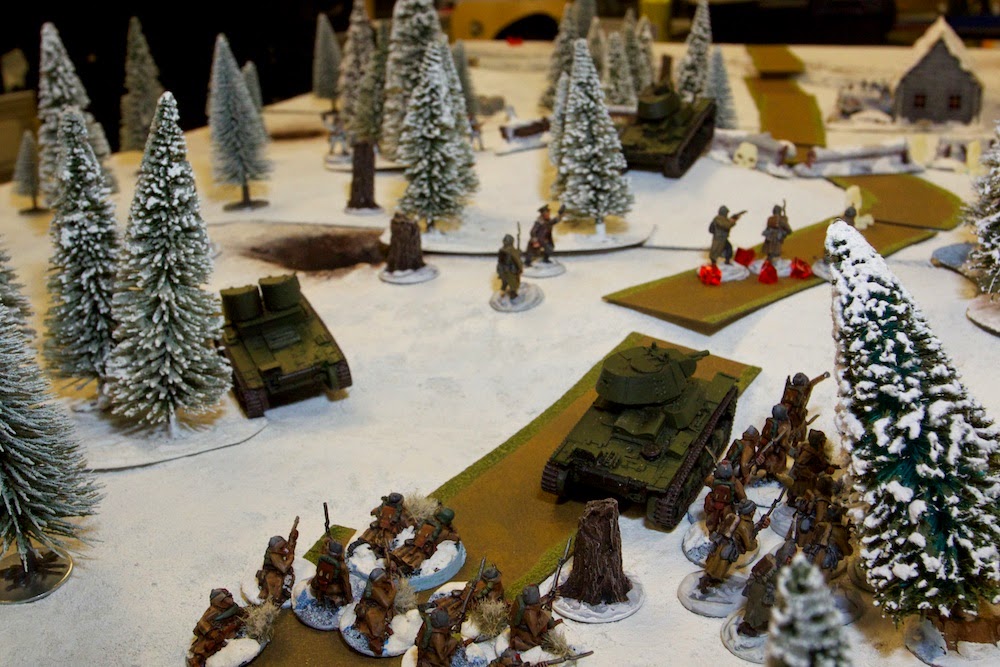 With the Commissar and more troops showing up on board the T-26s finally gather enough courage to move up the road and clear the Finnish troops from the nearby forests that had kept the Soviet infantry at bay. However this put them on the sights of the Finnish antitank gun that suddenly started hitting it's shots putting one tank out of order and immobilizing the other. 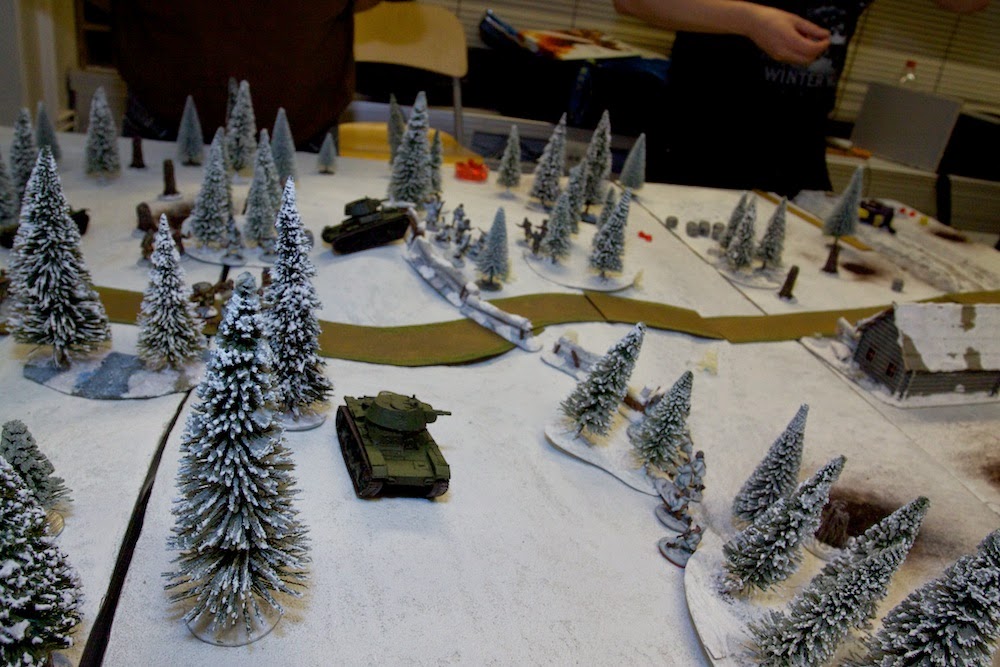 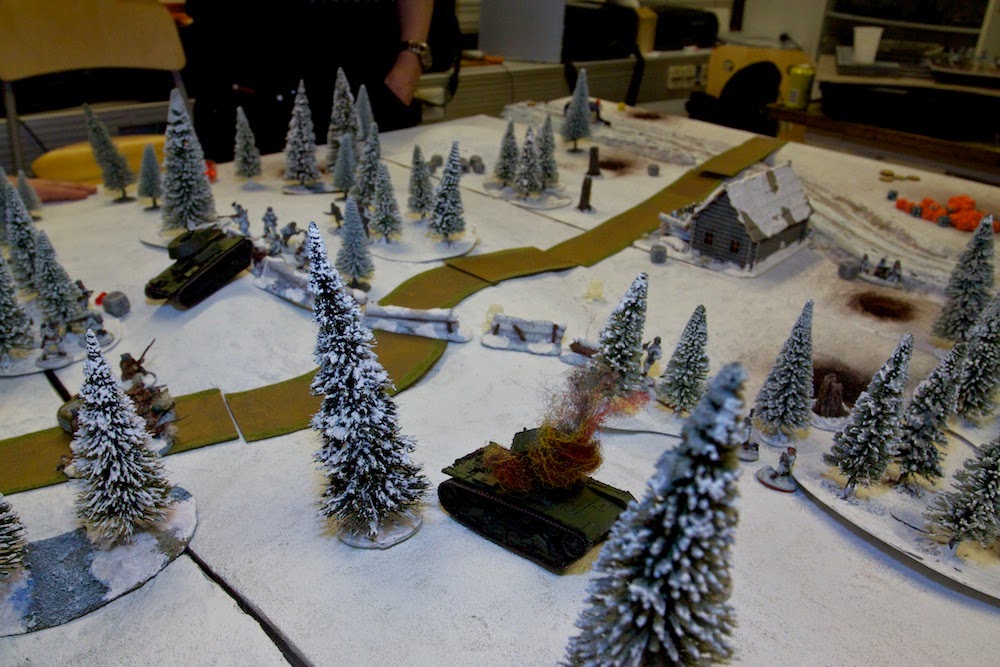 All in all a fun game, eventhough the far more numerous Soviets took a serious beating and only managed to disable a single minefield and not make any headway along the road. Some atrociously bad dice rolling on the part of the Soviet player saw the Finns come through the shooting match almost unscathed and nonexistent co-operation between the infantry and tanks in the beginning of the game didn't make things any easier for them either. Fire support and mobile cover for infantry was nowhere to be seen so they were quickly cut down.  Still this was the case historically too with the Soviet tanks advancing alone while their supporting infantry was moved down with machine-gun fire leaving the tanks alone and vulnerable to close attack.
Lähettänyt Samuli klo 14.44