It's been nearly a month since I managed to post anything on the blog and even before that there was quite a pause. After the painting challenge I had a massive slump in painting time and frankly didn't really get anything done the whole of April. Now with May having come in I've slowly been getting my gears turning again and minis are getting painted!

My painting station is quite a mess at the moment with tons of half finished projects in there and everything just randomly thrown in. There's a bunch of monsters for Frostgrave, loads of Flames of War stuff, some 40K chaos and yet more Epic 40k Space Marines that are all in a varying state of readiness. I really need to get my act together and start finishing stuff to clear the table as it's now in the state that it starts to feel a bit overwhelming at times! Luckily about half the Frostgrave stuff is just waiting for basing as are the Terminator units for Epic 40k (which actually have been painted for nearly a month now). I guess it's slowly getting there. 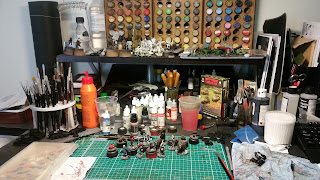 Even though I haven't been painting too much, I've actually gotten quite a few games in with multiple Flames of War games, as well as some Hail Caesar and the first games of our Frostgrave campaign. So all in all quite an active period, just not on the painting table. There was also a new event in the Finnish wargaming calendar with Porocon being held for the first time. The event featured the national championships in Magic the Gathering and also had a large 40k tournament running. My club was there to promote other aspects of miniature gaming with 3 historical games on show as well as an Infinity game. I was running Flames of War with a Market Garden scenario from Band of Brothers featuring the attack on Nuenen. 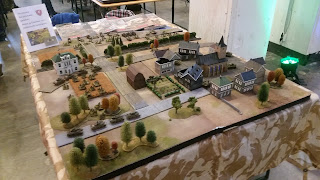 I also scored quite a nice find from the 2nd hand market there with a guy selling old Citadel stuff as well as boardgames. I bought myself a Leonardo di Miraglio mini that I'd been looking for for months already. But when I saw a Team Yankee boardgame from the 80s going for 5 euros, I couldn't help myself and had to get it. I've tested it playing against myself and it seems to be a pretty decent game even if slightly favoring the Americans. Still it's funny to throw that in when other are playing the Flames of War variant :) 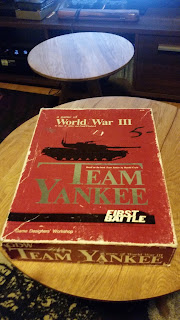 I've also finally managed to go through the last pictures from our trip to UK and edited all the hundreds of pictures from Warhammer World. So stay tuned for that :) Hopefully the wait won't be as long as it was between the last couple of posts.