Change of subjects again, this time with a switch to a completely new game for me, Dropfleet Commander. I've always been a massive fan of different space movies and tv series with fond memories of Star Wars, Battlestar Galactica and some of the Star Trek series like Next Generation. Naturally space combat fascinated me and I've played multiple games including Battlefleet Gothic and lately X-Wing and Armada. So when Hawk came out with their Dropfleet Commander Kickstarter about a year ago I immediately jumped on board with a pledge. With the Horned Rat, Andy Chambers, behind the rules there was no way that I was going to miss this especially since the aesthetics of the ships are brilliant. 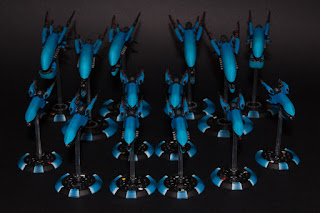 Little over a year has gone since the Kickstarter and I still haven't received any of my toys. Bit of a shame as some people got their stuff already in September and they've been in stores for a while, but I don't back Kickstarters thinking they are presales, rather to make sure that a cool looking product gets made and gets a good start on the market. I doubt Dropfleet could ever have become so big straight from the start without the Kickstarter. The only thing that I'm a bit pissed about in the whole project is the initial lack of communication from Hawk's side. Most backers were kept in the dark and when stuff started to show up on sale in online stores with only a few backers having received stuff, it's pretty understandable that people got angry. But luckily their communication has improved  greatly with updates coming in every few days, so I think Hawk have learned their lesson and if they ever do another one I think they'll do much better.


Even though I still don't have my pledge I caved in in November and went ahead and bought two boxes of ships. Seeing people's efforts around the internet I couldn't resist the urge for ships and as I only had a single box of PHR coming from the KS I figured some reinforcements on that sector would be most welcome. So a few clicks and some wait for the postman to bring my stuff, and I was a proud owner of two starter sets.

I don't really have any clue about the rules yet so knowing what to build was a bit tricky. In the end I decided to build one box as the suggested starter composition. The other box was a bit harder, but after browsing some blogs I decided on building all the frigates as Pandoras. Burnthrough lasers seemed pretty cool and I'd think a hunting pack of four of these little ships can easily bring the pain to unwary opponents. The Cruisers were then built as two Ganymedes, which are large ships filled with ground troops ready for landing operations and finally a Bellerophon bringing two Burnthrough lasers and massive strike aircraft wings into play.

On thing that struck me was how massive the models were. To give an idea of the scale the larger Heavy Cruisers come in at around 13 centimeters long and even the smallest ships are bigger than 28mm figures. I'd seen these live at Salute and tons of pictures online, but still I managed to get surprised by the size of these things. As these are something like 1:15 000 scale models I just pictured them to be a lot smaller. But then again they are space ships so even the smallest ones would be massive. 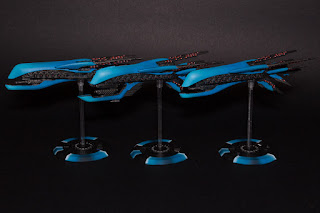 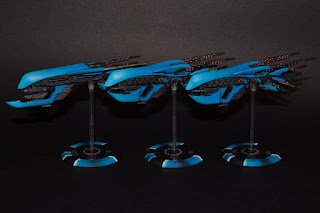 Paintjob wise I tried out a few different schemes with varying colours and camouflage patterns done with the help of stencils. None of them really seemed to do the trick and in the end I just ended up with a simple gradient that keeps the large flat surfaces clean looking. Some smallish decals would probably be a nice addition, but I still haven't found any that I like. Though looking at 40k stuff Tau decals would probably look quite good on the sides of the PHR ships as there are some similarities in the design aesthetics as well. Rest of the ships were painted with a metal colour then washed black to bring out details, before finally painting the engine lights red and picking out things like ends of guns with the same colour. Finally I painted the bases to highlight the front and side sectors to make playing a bit faster. 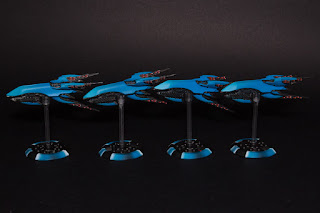 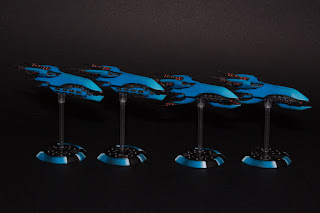 With these done I'm probably not going to paint anything until the Analogue Hobbies Painting Challenge starts again. I need to prep stuff for it to have at least something to start on when Curt blows the whistle. Christmas holidays should provide ample time to paint my first few entries.