I'm finally back from our summer cottage and normal business will resume at least for a short while until we are leaving for France next week. A French friend will be getting married, but being there I figured a visit to Les Invalides and other historical sites will be in order as well.

Some quick additions to my Frostgrave forces. These were painted before leaving for our summer cottage, but I didn't get around to basing them then. As I'm playing an Enchanter I needed a large construct as well and Heresy Miniatures provided an excellent mini for that. I also painted up another Empire Greatsword, this time a fully armored one to act as a Paladin in game. Also added a Landsknecht Crossbowman to provide even more ranged power. I think it's from Redoubt, but not 100% sure as it's one of the minis I bought as a larger batch. One of the worst sculpts I've ever painted, but as I didn't really have any other suitable Crossbowmen he had to suffice until I put an order in at Foundry or some other suitable manufacturer. 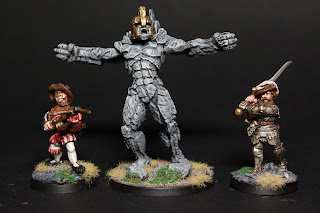 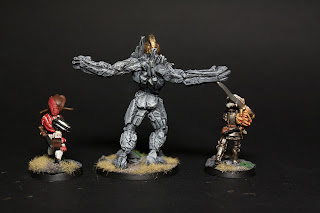 And finally some treasure tokens to be used in game. Fast and dirty with just a basecoat and a wash on most of them. These are all the official treasure tokens that Northstar makes as I didn't want to start scratch building my own. And they are actually rather nice looking so I didn't deem the extra effort needed for unique ones wasn't justified. 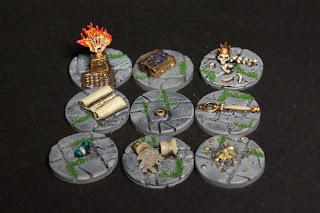 As the weather was quite favorable while at our cottage, I didn't get too much painting done. Instead time was spent on the close by rapids fishing and just fooling around outside with the little war hound. Luckily, at least miniatures wise, there was a bit of rain on a couple of days and I was forced to stay indoors and paint. Finally got the last of my Epic Salamanders finished and got started on a Gargant Big Mob. I'm hoping to get at least some of the Gargants and Stompas finished before leaving for France. But we'll see. 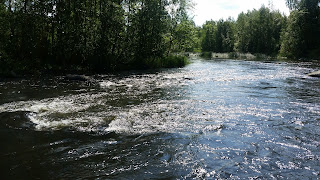 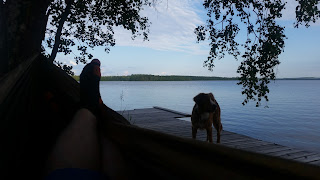 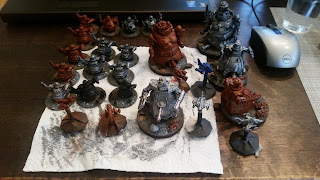