Being bored I got started on one of my goals for 2015 by starting to practice sculpting. I had originally planned to go the traditional way with green stuff and other sculpting putties, but then decided that digital sculpting is probably more for me. 3D printing masters for casting seems to be on the rise with for example Infinity models being designed on a computer. I have access to 3D printing and I've done 3D design as a living in the past before progressing to hating excel and writing e-mails, so I figured learning a new 3D tool shouldn't be too hard and could somehow be seen as improving myself professionally :)

So I went ahead and fired up ZBrush after looking up some tutorials on youtube and started experimenting. After the first hassle of getting used to a new program I started toying with it. My first effort could not stand the light of day, but now my next try at least ended up looking like something. Sculpting a human seemed a bit daunting so I just started doing a bust of some creature from my imagination and seeing where it goes. Ended up with something relatively humanoid with quite a bit borrowed from the aesthetics of Warhammer Bloodletters. After a couple of hours I now have the basic shape finished and waiting for details like wrinkles, scars etc. which will probably end up taking many times longer than everything until this point. 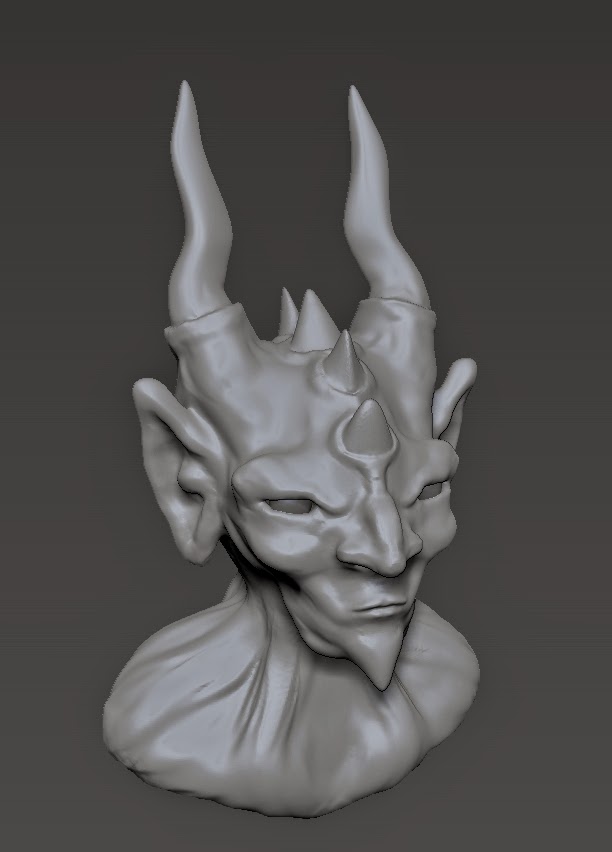 All in all I was actually quite surprised how easily it came about considering that I haven't done any organic modelling in my life and it's been about a year and a half since I last did any product development related work anyways. After this I'll see how a whole body will turn out and maybe try to do something a bit more realistic. I had a grand plan of sculpting some Napoleonic Swedish/Finnish troops and getting them printed and maybe some masters cast for my own use so I can play the Finnish War of 1808. It's still quite far away, but if the learning progresses as fast I might actually succeed in doing it this year :)
Lähettänyt Samuli klo 19.01