I managed to survive the Christmas even though it was spent at my parent-in-laws for the first time. Previously we've been staying at my parents or then both of us with our own families. Some missing dishes and new Christmas traditions, but nothing too serious. No gaming related gifts, but I guess the big pile of lead from the Winter War Kickstarter is enough for a while :)

I came back to the painting table with a reinforced platoon of Flames of War US Paras. Got them mostly done during the last two days. Still missing flags and insignia and the ammo belts for the machine-guns. I also still need to paint some of the detail on the bases like sandbags, dead cows and discarded equipment.

I also finally bought the Bolt Action rulebook and the rules supplement with all the required rules for Finnish troops in WW2. Had a quick glance through on the bus ride back from the city center and some of the Finnish special rules look quite nice and quite characteristic. Some exaggeration on the Kaukopartio background info, but I guess that's minor stuff :) 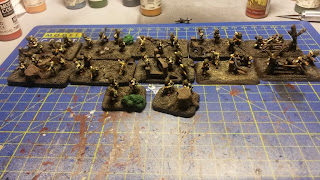