Continuing to empty my desk of half-finished projects before Sunday. Earning their place in the spotlight today is a Nurgle Hero from GW. Love the mini, too bad that he probably won't be seeing that much playing time, at least whenever competitive lists come into play.

I went for the same yellowish skin colour that I used on the Gorebeast Chariot I did a while back. Started by airbrushing dark brown on shadow areas, followed by dark yellow and finally a highlight of dark yellow + light grey in about 50/50 mix. Shoulderpad painted with an airbrush too.

I decided to use this mini as a training for using the GW technical paints a bit better than I did on the Chariot and Knights. The blood effect looks a lot better now as does the slimy stuff too. The rusty parts are done with a mix of GW's Typhus Corrosion and AK Interactives Orange Rust.

I'm actually starting to think I should do the Nurgle bases as more of a autumn themed thing instead of a winter theme as I still haven't figured out a nice way of doing snow that seems right in the eyes of a Finn like me :) Baking soda + PVA glue looks quite nice, but I've heard a lot of people complaining that it turns yellow with time. Anyhow the yellow autumn grass with dark ground looks quite nice and is really fast and simple to do so I might stick with that only for those reasons too.

Anyway, here is my Nurgle hero in his natural habitat walking amidst flowers and green fields. 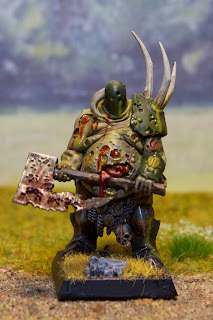 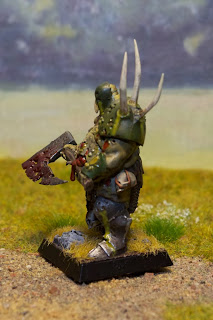 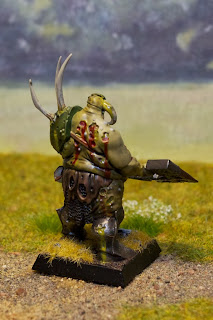