Next up on my list of completed long time WIP stuff is 16 Saxon Thegns from Wargames Factory. I originally bought these to have a cheap way to get into Saga, and cheap they turned out to be both on their price and their looks. I'm not too thrilled about the castings as they have some weird poses, terrible heads with really long necks that have to be cut down, bad detail on armor, arms too big for the weapons on the sprue, and all weapons being extremely prone to breaking apart.

Anyhow they didn't break the bank at less than 20 euros for 32 minis in a box so maybe I shouldn't complain too much. Would have wished for more spears though as only half of them can be equipped with them. I ended up trying to speed paint them. So I skipped all highlights and instead just used the army painter stuff like a dip instead of as a wash. Looks OK for gaming I guess, but I did have to go back and add highlights to the faces to make at least some part stand out a bit.

Shields are all painted as I didn't have any suitable decals for them. I did try painting some shields with animals and runes, but they just ended up looking horrible so I ended up doing everything with simple geometric shapes.

Still a some Hoplites to finish off after these fellas. Maybe tomorrow will finally be their time after waiting 3 months on the table for decals and basing :) 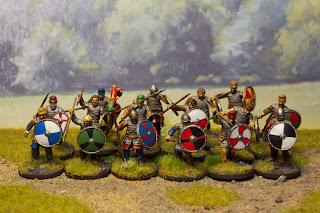 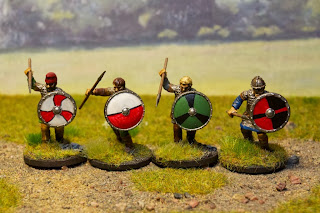 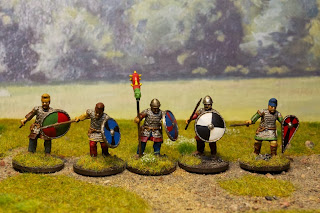 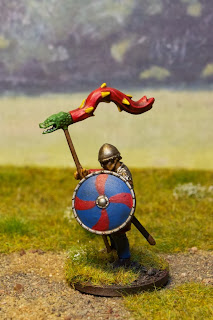 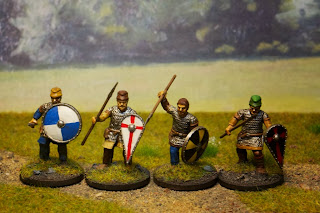 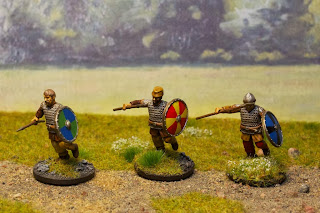 And the weirdest pose of the pack. Doesn't really look good with any arm options.